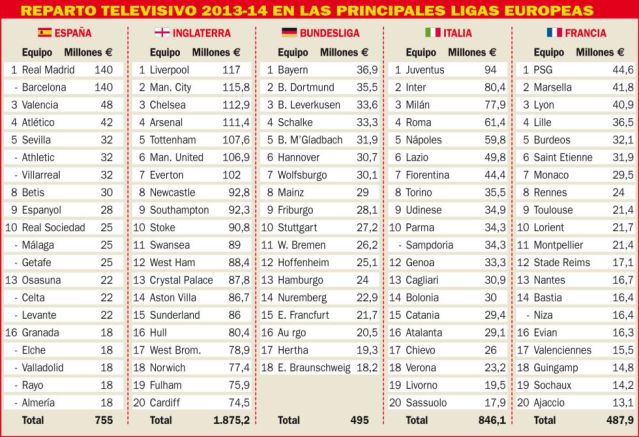 The chart above was taken from Spanish Sports newspaper AS. I initially saw it as a tweet from their @English_AS account.

In the wake of the new Premier League TV deal, I thought it would be interesting to see just how much Premier League teams are making in comparison to the other big leagues of Europe. There are some interesting things going on here. All of the numbers are in Euros and take into account total revenue and per team revenue from television deals, both domestic and foreign. These numbers are just TV revenues from league television contracts and do not include money from broadcast European games, cup games or friendlies.

Looking at the foot of each column, the Premier League has over twice the total revenue of its nearest rival, Serie A. La Liga is comfortably in third, while the Bundesliga barely outstrips Ligue1. Given the global success of Bayern Munich and general good European play from other German clubs, one has to feel that the Bundesliga should be doing better here.

There is another layer of information once each full column is read from top to bottom. The distribution of funds by each league is different. The Premier League divides the revenue from the overseas rights equally and divides the domestic money based on a combination of equal shares, final position in the table and amount of times broadcast. This creates a model for the top team making just over 1.5 times that of the bottom club.

The Bundesliga uses a points accumulation system based on the previous four years that is weighted to reward more recent form. The current season standing counts for 40%, the prior one 30%, the third is worth 20% and fourth is worth 10%. In a very German model, this creates a 2:1 ratio between the top ranked team in the table and the one propping it up at 18th place.

France sees a larger spread between the haves and have-nots with PSG making almost 3.5 times Ajaccio's rather pitiful €13.4 million. One half of the TV revenue is split evenly between all teams. A further 30% is based on team performance in the league. The last 20% is distributed using on TV audience ratings.

Things get worse for Italian minnows as champion Juventus reaped 5.25 times what Sassuolo was able to bank. The Italians have a (purposely?) less clear way of sharing the money. Funds are divided using a combination of an equal share, league position, historical results figured two ways, home city population size and something called the "Supporters Index Element," which is used to reward the most popular teams in the country with more money. The "SIE" is 25% of the TV deal. Hence teams like Juventus, AC Milan and Inter, who have large national fan bases, will be paid far more than Chievo Verona or Torino. There is new Serie A deal that will see a greater total payout starting next season, but the top team will make closer to 6 times what the lowest team makes.

It is Spain where the greatest inequality is found with both Real Madrid and Barcelona combining to take almost 40% of TV revenue. The Spanish giants each make over 7.5 times the amount as any of the unfortunates that finish 16th or lower in the table. The top four clubs garner almost 50% of the total payout of TV money whereas the top four Premier League teams rake in a shade under 25% of their deal. There is also the absurd situation where Atletico Madrid, who finished first last season, makes almost €100 million less than the teams that finished second and third.

Looking at the individual teams on the table shows how much better Premier League clubs do in comparison to their continental brethren. Cardiff City, who were relegated, made more than double what Bundesliga champions Bayern Munich earned from broadcasting rights. Stoke City, who finished 10th, make the same money as the bottom five La Liga teams combined.

It is important to remember that this is just one aspect of how clubs earn their money. However, most teams are not able to have large commercial deals with sponsors and four teams, at most, from each league qualify for the very lucrative Champions League. Actual ticket sales are becoming a smaller percentage of a club's turnover and are difficult to grow with out undertaking expensive stadium expansions or unpopular price increases. It is television money that is driving growth for teams. The way that the money is distributed says a lot about who controls the league and what they value.