Transfer Day Done: Who's In, Who's Out and Poll!

Does he look happy? I can't tell.

Share All sharing options for: Transfer Day Done: Who's In, Who's Out and Poll! 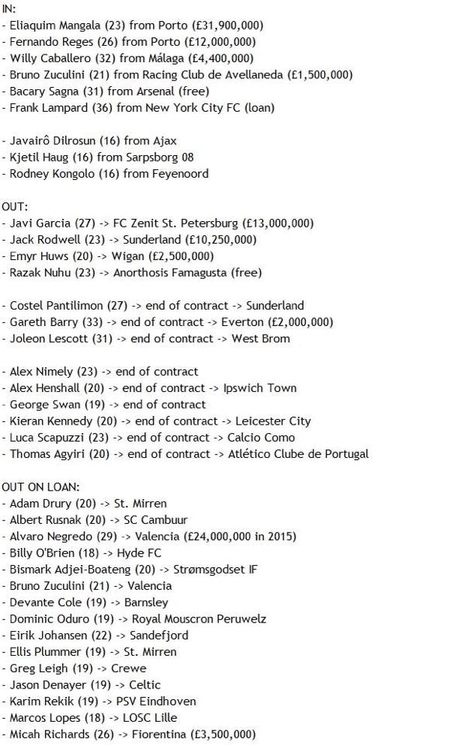 Part the First: About the Strikers

When you have three strikers and your manager has previously said we need four, and when two of the three you have are candidates for medical benefits in any given week and when the rumor is Yaya Toure will be the fourth striker if they really, absolutely need someone to fill the bill? This is all what we call in the business "risky stuff." If Sergio Aguero and Stevan Jovetic remain healthy, it's all to the good but that word 'if' is capital I, capital F. I will add here that I hope the 17-year old wunderkind Kelechi Iheanacho gets his paperwork in order very soon.  I would add as well that getting a loan with an option to buy for an injured striker (meaning all due respect to Alvaro Negredo) is one helluva piece of business. Speaking of which...

While we as City fans are still subject to snide remarks about our spending habits, those habits have been gone now for months and we didn't need the ludicrously hypocritical FFP guidelines to "get us in line"; it was in the plan all along to operate from a profit derived from football operations *after* starting off with aggressive spending. Based on my read of the above chart, it would appear we are in the beginning stages of "profit" spending. Don't get me wrong--I still think we'll make some huge signings but the days of spending hundreds of millions in a very short period of time are done. We've got an extraordinary roster; quite literally two-deep at a minimum at every position We have a solid youth program and we've got a rapidly expanding worldwide brand, not to mention four trophies in four years, including two league titles in the last three.

There are very few athletes more likable than Micah Richards. Do yourself a favor and fire up a random youtube search; you can't help  but smile at what you see. I can't imagine a City fan that wishes him anything but the best. It's another opportunity for me to reflect on the extraordinary 1-6 game from three seasons (!) back. At that point, you'd be forgiven for thinking Richards was one of the best right-backs in the world. What's less remembered was a match--the opposition escapes me--where Micah filled in at CB alongside Kompany and played his ass off, getting to every fifty-fifty ball imaginable. He got hurt not long after that and he stayed injured for months afterward. But the extraordinary attitude never changed. He had the demeanor coaches would sell their players if they could. If I'm ever in the stands when Micah Richards is playing, I'll be applauding loudly when his name is announced and I'll be standing while doing so.

Part the Fourth: Other Notes

Part the Fifth: Poll!
You know what to do.