Isco is a precocious talent & City-class. But can City find a place for him after being constrained due to home grown rules?

Summer of 2013. Manuel Pellegrini is appointed as new manager of Manchester City FC. During Pellegrini’s previous managerial stint at Malaga, one lynchpin for Manuel’s grand scheme of things was a 21 year wizard, Francisco Alarcón. Soon after Pellegrini’s appointment, it looked almost inevitable that Isco would reunite with his footballing father. But a month later & a phone call from Zinedine Zidane, Isco moved to Real Madrid.

Summer of 2014. Isco is unsettled with arrival of James Rodriguez at Real Madrid and City find themselves with another opportunity to reunite the mentor & his protégé. Should City grab it?

How good is Isco? Is he City level? 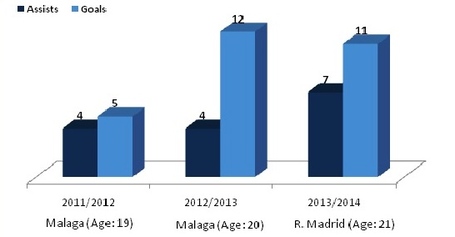 A combination of goals & assists of 16 & 18 is no simple task. Rest alone for a 20 & a 21 year old! Granted that for 2013-14, there could be Real Madrid "boost" in his numbers. But it is offset by the fact that with Cristiano & Bale in side, Real Madrid didn’t play to Isco’s strengths. And he did shoulder some major responsibility at Malaga, at a tender age of 19!

What also is praiseworthy about these numbers is "continual development". Its preferable to have a player who shows year-on-year development rather than a player who gives one super year followed by two poor ones.

Let’s delve deeper & compare him with some of PL’s precocious talents of similar age. 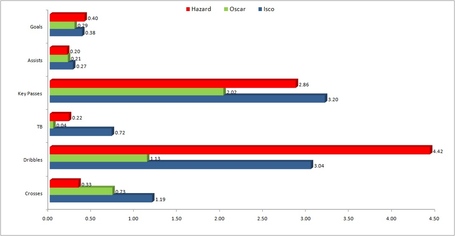 Hazard is better than Isco in Goal production & significantly better in Dribbles, while Isco balances it with Assists, KP’s, TB’s & Crosses.  Isco has better production than Oscar on each & every parameter. Oscar just went off the boil in second half of season which negatively skewed his stats. And it in a small way gives an insight into focus level of both players in question.

Though a small sample to compare with, it’s fair to say that he is right up there with top U23 talents, at least in PL. 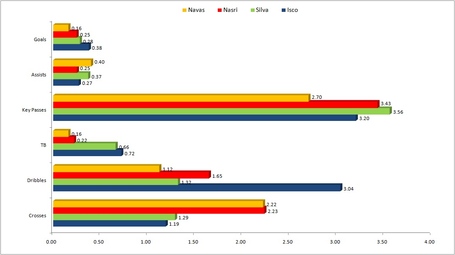 Isco has "highest" production in

Isco has higher Assist rate than Nasri & is not very far behind in Key Passes too.

Reminder 1: Isco does quite well against a certain Samir Nasri who has produced one of his best, if not best, seasons.

Reminder 2: To naked eye, it always seemed that City lack dribbling & through-ball prowess & above chart does evidence it. One possible solution is visible too.

Silva & Nasri are regular starters for most/important games leaving Navas, Milner & Jovetic available from the bench.  Navas solves critical tactical issues of width & pace in side, while Milner is the workhorse which every team needs. However, it’s arguable if either of them are "creative" enough. Jovetic, when fit, is a world beater but he would be more responsible for scoring goals than unlocking defenses. One specific tactic used by Pellegrini, like Mancini, is to launch Yaya forward. But it works by creating space for his runs from deep than using guile & trickery. Even with the riches of Manchester City, they are bereft of a creative mastermind who can be called upon from the bench & bring fresh ideas to break deep walls they expect to face regularly in Premier League.

Bringing in Isco also helps in managing workload of Nasri & Silva, so essential while challenging on 3 fronts. All this while not having any major dip in quality – not many players can achieve that.

Let’s get this straight: Samir Nasri was simply outstanding last season and City fans will hope that he repeats his performance over next 2-3 seasons. However, consistency is extremely difficult to achieve & what separates great from good. Samir has a history of letting personal things affect things on pitch & losing focus. He seems to be a changed man under Pellegrini, but can City risk it?

David Silva (28.5 years) & Samir Nasri (27 years) are important lynchpins in City’s creative line-up. Silva has a minimum of 2 years of his best left in him. And it would be ideal time to bring in, to use a cliché, his heir. Bringing in Isco is not underestimating the talent or undermining the progress of Marcos Lopes. Marcos is the statement on our academy which City fans & club hierarchy want to make. But at tender age of 18, Marcos is still 2-3 years away from shouldering the creative work load at a club like City. This makes him a replacement for Nasri rather than Silva. In fact, with Navas & Milner also hitting wrong side of 20’s, there will be more than one spot which will need replacement.

City has reached its spend limit (£48.5M) set by UEFA, assuming Mangala deal would be closed. It means that City needs to sell to fund any purchases. In any given case, City was expected to move some deadwood off the roster. This included all or some of, Micah Richards, Scott Sinclair, Jack Rodwell, John Guidetti, Javi Garcia & if recent rumors are to be believed, Matija Nastasic. Keeping Matija aside, rest could be sold for a very conservative figure of €24-26Mn, with biggest chunk coming from Javi Garcia. With Isco expected to cost about €30Mn, City would be very close to raise the required funds.

Bringing Isco on loan with an option to buy would be another course & his willingness to reunite with Pellegrini could work in City’s favor. Real Madrid’s need to sell Isco to fund for James Rodriguez, or reportedly Falcao, could pose a threat to a loan move though.

However, City’s biggest challenge lies in making space in squad for Isco due to home-grown rule. With imminent arrival of Mangala, City have to sell one non-HG player, most likely to be Garcia, to be within permissible limit of 17. If City pursue Isco they need to sell, loan or exclude a player from PL squad (no one is crazy enough to do it!) and biggest challenge facing them is, who?

But one thing is sure. Isco is a too good a talent to miss out & there are very few clubs who can do away with him.