Another match, another three goals – the 31st time (out of sixty matches) that City have scored at least three since Pellegrini arrived at the Etihad.

Share All sharing options for: City 3 - 1 Liverpool: Tactics and Trends

Pellegrini made just one change from the side that faced Newcastle in the Premier League opener, as Aleks Kolarov made way for cult-icon Pablo Zabaleta. The change allowed Clichy to slide over to his natural position at left-back and again signaled that Pellegrini views the Frenchman as the preferred defensive option at left-back (more on this later). Perhaps the only surprise of note is that Fernando kept Fernandinho out of the starting eleven – a change that I expected once the World Cup participants returned to action.

Liverpool played in a 4-5-1 that attacked in a 4-3-3 (that often looked more like a lopsided 4-4-2) and defended with Sterling and Coutinho tracking the overlapping runs of Clichy and Zabaleta respectively. Coutinho’s defensive contributions were especially important, as Zabaleta plays a very important role in City’s offensive philosophy. Gerrard sat deep as he’s done for most of Rodgers’ time at Liverpool, splitting the centre-backs when the visitors enjoyed possession and shielding the back four when they didn’t. Above him were Allen and Henderson who filled out Liverpool’s often compact midfield triangle.

It was a strange match – not unlike the start against Newcastle, in truth – as City were slow to impose themselves on their visitors, often staying compact and organized defensively. Perhaps it was out of respect to their opponents, wary that an expansive offensive expedition might cost them an early goal (or two) the way it did when they last met at Anfeld in April.

It’s not hard to think that Pellegrini opted for Clichy over Kolarov because of the danger that Sterling posed playing on Liverpool’s right; a tactical wrinkle that saw one of Silva or Nasri defend deeper than usual on that left side. Liverpool’s shape and attacking philosophy is predicated on the speed of the attacking options and the freedom afforded those players in the attacking phase. Both Sterling and Coutinho prefer to come inside from the wings, which often drags opponents too narrow. Coutinho especially, likes to play a similar role as Silva, drifting inside from a wider but still relatively deep position adding another pseudo-central midfielder to Liverpool’s  play, while Sterling plays more as a sort of wide forward, always looking to come more centrally either with or without the ball.

The effect is often more space out wide for the fullbacks to move into – on this night, Moreno more than Johnson – in a somewhat similar style as Pellegrini prefers to employ. The result on Monday was a narrow match, with Silva and Nasri tucking inside as they’re wont to do, while Jovetic and Dzeko both stayed more central than perhaps was good for them. It often proved to be a match of fullbacks though, as the over- and under-lapping of Zabaleta and Moreno provided the width that either team lacked from their more strictly attacking players.

Having found a real foothold in the match around the 30 minute mark, City were rewarded courtesy an Alberto Moreno error – coupled with Gerrard’s failure to properly track his runner – that allowed Jovetic to open the scoring. It began with Nasri’s best contribution in a match full of them; indeed, it was one of those matches that reminds us of the Frenchman’s ability, continually looking to get on the ball and make things happening. (Interestingly, Nasri and Yaya led all passing combinations with 50 – an impressive reminder of Nasri’s ability to dictate preceedings when he’s in the mood.)

City’s second came less than ten minutes after the break, following an impressive move that consisted of 19 passes from all outfield players, beginning with Kompany and ending, of course, with Jovetic. Opta’s graphic of that goal shows just how encompassing the move was, going from the right side to the left and all the way back to the right before Jovetic coolly finished off his brace. 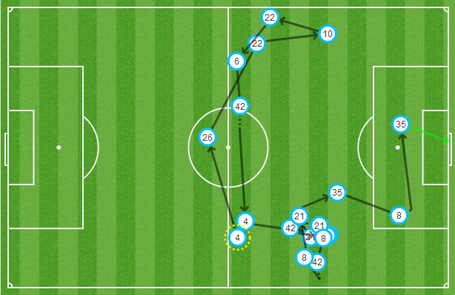 It’s a move that shows the benefits of having two mobile strikers up front, as Dzeko can be seen having pulled off to the left while Jovetic moved right. In the modern game, when single striker formations have seemingly put the 4-4-2 out of fashion, it’s another reminder of the positives of Pellegrini’s systems (and those of Liverpool’s last year).

The Community Shield aside (which saw a hilariously poor backline fielded), City have seemingly started this campaign with a defensive solidity and organization that was only partially on display last year. Fernando’s arrival is at least partially responsible as he’s rarely – if ever – been caught up field through the first two matches. Fernando’s greatest strength seems to be his ability to direct the opposition’s counterattack’s to the least threatening areas of the pitch; he’s the type of usher who knows just how and when to move the late arriving wedding guests away from the center aisle and towards the rear corner seats (weird analogy, but I’ve attended a fair few weddings of late). He can protect the back four while simultaneously affording the fullbacks enough time to recover. If he, and City, can continue this defensive solidity, it might be difficult for Fernandinho to reclaim his starting spot alongside Yaya Toure in midfield.

And speaking of Fernandinho, for the second time in as many matches, Pellegrini has turned to the Brazilian (each time at the expense of Jovetic) to see out a hard earned victory. Like last weekend against Newcastle, it was again a three man midfield – only it’s not exactly a tight triangle leading to a 4-3-3. It’s Fernando holding for Fernandinho with Yaya playing above him and just off Aguero, picking up the second striker’s role of pressing high. It’s a pragmatic approach to see out games, and might just save the precious points the title ultimately requires.