The Growing Interest In The Premier League

A graph, a gif, and a few words on how the Premier League is growing.

Share All sharing options for: The Growing Interest In The Premier League

A short blurb on the Premier Leagues global TV reach via Wikipedia.

The Premier League is broadcast to over 600+ million people in over 200 countries worldwide,[71] often on networks owned and/or controlled by 21st Century Fox (which owns about 39% of BSkyB in the UK). The Premier League's production arm, Premier League Productions, is operated by IMG Productions and produces all content for its international television partners.

The Premier League is particularly popular in Asia, where it is the most widely distributed sports programme.[72] In Australia, Fox Sports broadcasts almost all of the season's 380 matches live,[73] and Foxtel gives subscribers the option of selecting which Saturday 3pm match to watch.[74] In India, the matches are broadcast live on ESPN and Star Sports. In China, the broadcast rights were awarded to Super Sports in a six year agreement that began in the 2013/14 season.[75]

In the United States, NBC Sports (primarily through NBCSN) is the exclusive broadcaster of the league in the U.S. in English (Telemundo and Mun2 now carry Spanish-language coverage) as the result of a three-year, $250 million USD deal with the league.[76] And all games are carried through NBC Sports' website and the "NBC Sports Live Extra" app.[77] In Canada, matches are divided equally between Sportsnet and TSN/CTV.

The Premier League has grown a lot over the course of its existence and it will continue to grow due to both legal and illegal methods of providing live games and highlights. 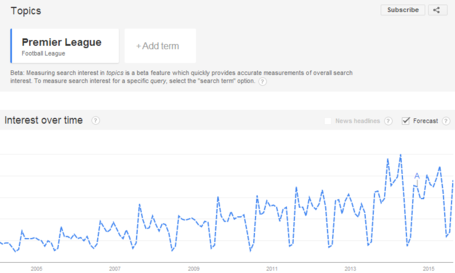 Google Trends likely includes a lot of false searches in these reports, but we don't really have any way of checking just how many of those false searches are included. But there's a definite trend in the graph above, but who is powering the growth in search and article traffic?

Traffic By Country Over Time

The GIF above shows us the traffic trend from 2004 to 2014 for each country. There will likely be some issues with the data - false searches, searches not included - but it gives us a general idea of how and where "interest" in the Premier League has grown.

In 2004 the traffic hot spots were the UK and Australia.

In 2006, Canada, Scandinavia, the subcontinent and Africa show signs of interest.

By 2010 large parts of Africa, the US of A, the Far East and Europe are showing significant interest.

By 2014 Only Russia, the Middle East and South America and Central Africa aren't coloured by darker blue, which signifies increased search and article traffic.

In just a ten year span the Premier League has gone from by a thing of Interest in the UK & Ireland and Australia to being a league that most of the world now shows an interest in according the information Google has. If we take Google's info at face value then this is remarkable growth all over the world in just a 10 year time frame.

Factors in this growth? I'm just guessing here, but increased access to information about the Premier League and the ability to view games across multiple platforms (TV deals, growth of the internet, internet access, streaming capability, mobile capability, growth of websites). The increased interest is also likely helped by the product of the Premier League itself: a competitive league, better quality of players, the diverse nationality of the players and the expert marketing of the league itself.

Google traffic is a proxy for interest but I think, in general, it works well enough here to give us a basic idea of the level of growth across the world.