In Jovetić, City may have just found the perfect foil for Edin Džeko.

Edin Džeko has renewed his contract till 2018 & now stays in City till he turns 32. While we celebrate his contract extension, it’s an apt time to look at his blossoming partnership with Stevan Jovetić and a fantastic (MoTM) performance at Newcastle.

Stat Alert: Džeko had 3 shots with 1 blocked & 2 off target.

It doesn't portray a top performance, does it? But dig deeper & we get a different picture.

Intriguing Stat: Džeko's all 3 shots were created by Jovetić!! Lets look at each of those.

Just 3 minutes into the game & Jovetić plays a – brilliant – chip to Džeko; City fans have seen similar from none other than Silva & Yaya. 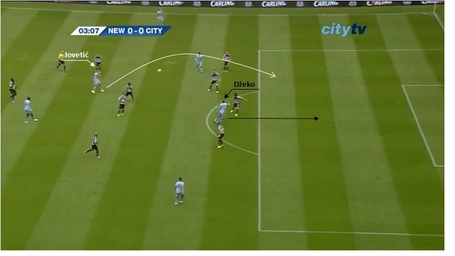 Džeko makes a perfectly timed run and gets behind the defenders. 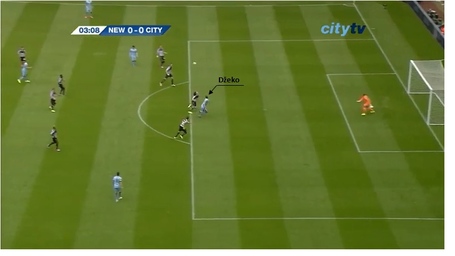 Jovetić’s delivery is excellent, but a touch too long. Džeko's stretches & just manages to reach the ball; his first touch is a shot & just a feet inch away from beating the goalkeeper. Brilliant move, brilliant effort. 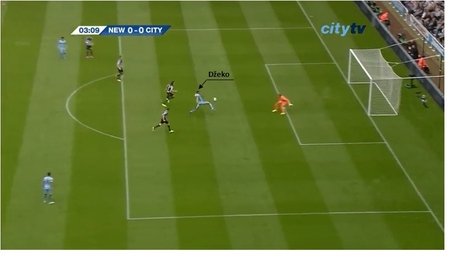 This is the best Džeko-Jovetić move among the three.

Jovetić moves the ball into vacant space behind defenders close to edge of the box & makes a run towards central area. 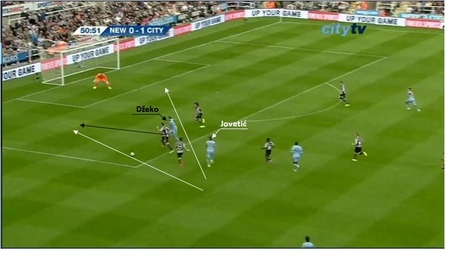 Džeko moves to collect it, making two frantic defenders to chase him, freeing up huge space for Jovetić. 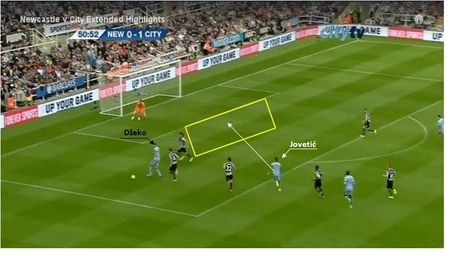 This is where it goes wrong a bit. Džeko goes for the shot & it’s a wayward one from an acute angle through his wrong foot. While Jovetić's move was to open up space in central area and expecting Džeko to hold the ball & pass or cross it back. Excellent move overall just failed to lack of experience of partner’s moves. Communication & anticipation of movement will keep getting better as seasons progresses & we can expect more of this. 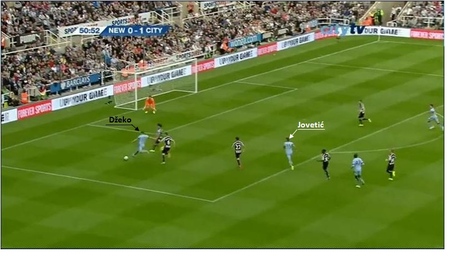 A failed corner attempt & Jovetić gets the ball just inside the penalty area. He locates Džeko & goes for another chip & in process attracts 4 defenders towards himself. 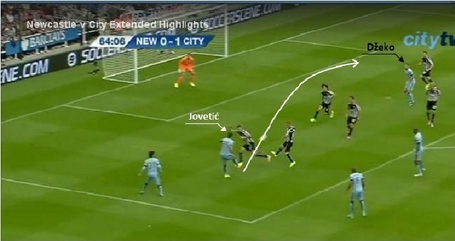 Jovetić’s delivery is inch perfect & Džeko makes a thunderous header but it’s just over the net. (Though the move is helped by poor marking of Džeko by NU defender, doesn’t get his positioning between ball & Džeko) 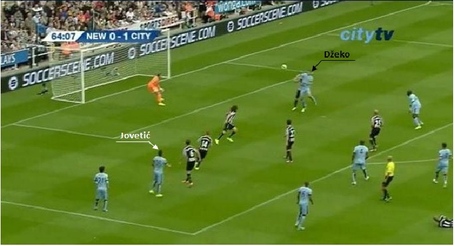 Pellegrini on Jovetic "He’s a mix. He’s not absolutely a attacker, he can be a midfielder…. He can replace Samir Nasri or Sergio Aguero. He has both things and that’s very important for the team"

Its apparent that Aguero-Negredo partnership works better than Negredo-Džeko or Aguero-Džeko. Early days but, in Jovetić, City may have just found the perfect foil for Džeko.

Against Newcastle, Džeko gave a commanding performance in every aspect of the game. He made 1 assist, 4 clearances, 1 block inside City’s penalty & won 3 headers. His heat map reflects his tireless work all across the pitch & nothing more can be asked from a pure No. 9. 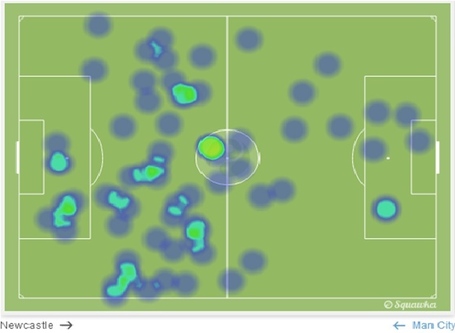