Arsenal winning PL will be a true underdogs-to-wonderdogs story. And while history is backing Mourinho & Chelsea, Pellegrini & City would like to create their own.

A look at the starting XI & bench strength of each title contender and finding sense in their title aspirations.

1) Players in team colors are starting XI while those in non-colors are the backups for that particular spot. For example: Szczesny is starting player while Ospina is backup.

2) Starting XI is most likely combination & not a prediction. 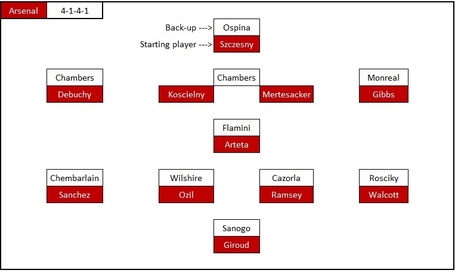 Defence: A total of 6 defenders available for 4 spots, one fewer than ideal. Add Arsenal's injury history & it would be a big worry. Koscielny & Mertesacker are mighty good but there's a huge gap between them & next in line (Chambers). Good fullbacks but none is top drawer.

Central Midfield: Arsenal's Achilles heel? Arteta has aging legs & nowhere near his best years. It’s obvious, Arsenal need at-least one DM/CM, if not more. Khedira would not be best choice for the role, but he would be an upgrade on wayward Flamini & aging Arteta.

Attacking midfield: If there's a draught in CM, there's a flood in AM. A total 10 AM's (these 8 plus Podolski & Gnabry) competing for 3 at most 4 spots!! We can expect Sanchez to be used as a FW later, but it still leaves 9 players for 3/4 spots, too many when there are other areas which seem to be neglected.

Forwards: Giroud along with Sanogo & Campbell (if not loaned) are just not good enough for a title win. As season progresses, Sanchez leading the forward line will be a good option but remains to be seen if it’s a title winning one.

Top drawer players: 4 - CB pair (CB performance is all about partnerships), Sanchez, Ozil, Ramsey (if regains 13-14 form). It’s not only lesser amount of top players but most are in AM area leaving other areas weaker than title rivals.

If Arsene wins PL against this Chelsea & City, it would be one of the brilliant underdogs-to-wonderdogs story of PL & football (and quite a goof-up by Mourinho & Pellegrini). 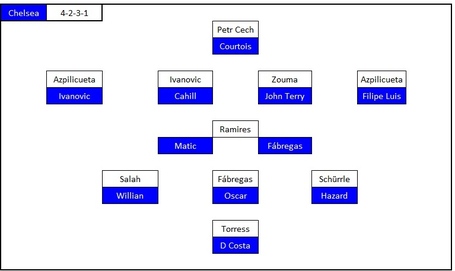 Defence: A solid-compact defensive line up. 6 players for 4 spots is one less than comfort zone. Add Zouma who is in-experienced & new to PL & Chelsea's problems in long run become apparent.

Central Midfield: There is a giant sized hole in CM area. Mourinho may be forced to use Fabregas in CM or it may well be the plan from start. But depth in DM/CM is threadbare with Ramires the only viable backup available. No surprise that Mourinho is keeping a close eye on Khedira with Pogba & Rabiot also rumoured to be their targets.

Attacking midfield: Chelsea have the best attacking midfield in PL. Hazard, Willian, Oscar & Cesc will be first 4 for three spots. Bench strength is decent too with Schurrle & Salah. Cesc may be launched forward as & when situation demands.

Forwards: Its surprising that a club of Chelsea's resources, have no depth in FW line. Chelsea will hope Costa doesn’t take too much time to acclimatize to PL or have a long injury run.

Chelsea has as good a starting XI as City but as a "complete squad" they are behind City & without Mourinho their league standing would have reflected similarly. With transfer window still open, expect Mourinho to get atleast 1 position sorted out, if not more. History is behind Mourinho (always done brilliantly in his second season) & its naive to bet against the self proclaimed Special One. 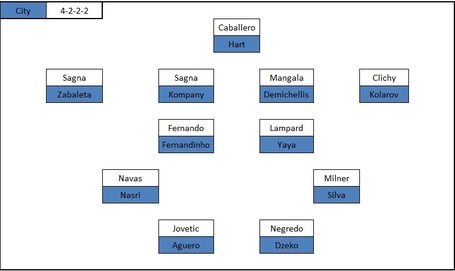 Defence: CB starting pair is one area where all three teams are on equal footing, maybe Chelsea a bit better. Nastasic is on his way out & Sagna would slot in as 4th choice CB. Only multiple injuries at same time, say Kompany-Sagna-Zabaleta, will expose City. Good backups for all spots, as good as Chelsea’s & better than Arsenal’s.

Central Midfield: Even without Lampard (after Jan), it’s fair to say City have best CM lineup among title challengers. It’s only during Afcon period where City will be tested, more so as Lampard is expected to leave at same period. During Afcon, as & when required, Milner will slot in at CM and City will hope injuries doesn’t strike to both Jovetic & Aguero during this period, else it can deal a heavy blow to City's title credentials.

Attacking Midfield: Excellent starters and balanced bench. Jovetic can play as a creator & could be the match winner from the bench.

Forwards: Hands down, best forward lineup in PL with backups of top quality too. Get consistency from No. 9's and City could go on a goal scoring spree of last season.

Players required: Ferran Soriano has already announced that City's transfer window is over.

With this squad, a decent manager should win PL for City and its Mourinho standing in their way to achieve a rare feat of retaining title. But if history is behind Chelsea & Mourinho, City & Pellegrini know how to create their own.