Man City#s newest signing, and, depending on who you read, a fantastically expensive one at that.

Share All sharing options for: Expectations For 14/15: Eliaquim Mangala 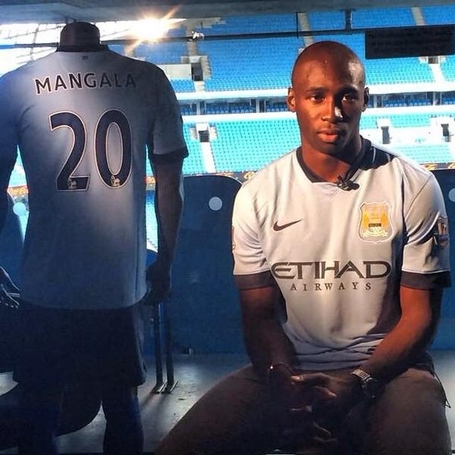 Wow, the saga is finally is over!

That was a long chase alright. A chase that spanned from January to June all the way through to August.

Why did his signing take so long to complete?

Porto drive a damn hard bargain, third party ownership issues, sell-on fees, the player may have needed convincing. Oh, and it is an expensive trasfer.

Traditional news media are reporting the fee to be £32m, the MEN are reporting 40m Euros but twitter and a few other sources, quoting info from Porto, are saying the fee could be £42m once all the various parties take a slice of the pie.

He has definitely signed, no more false alarms?

It's done, it's expensive and the casual City fan has no real idea of his talent level or just how good he can become.

But he must be excellent right?

We hope so, but very few people watch enough football to have seen Mangala on more than a half dozen occasions. I'd ask the guys who watch tons of Portuguese football for their opinion on just how good he is. You can find those guys on Twitter if you look hard enough.

OK, some background info on Mangala?

"I’m delighted to have added a player of Eliaquim’s quality in the squad ahead of the new season. He is already a fine player but in my opinion, he has all of the mental, physical, technical and tactical attributes to become one of Europe’s very best defenders.

"Eliaquim is a player I believe will make an immediate impact in the Premier League, thanks to his physicality, his reading of the game and quality on the ball. I think he will prove to be a great signing for us."

Sounds good. What did the player say?

"City is a top club in Europe. For me, it was an important step to leave Porto and join Manchester City in order to continue my progress. I want to win titles and I believe I can do this. I am ambitious and this is why I am here.

"I’m very happy to come to England because for me, the Premier League is the best league in the world. It is a very intense and very aggressive competition. There are plenty of goals, so it is also really nice to watch and I can’t wait to get started!

"The fact that Fernando is here is better because I played with him at Porto but there is also other players that I know like Sagna, Clichy and Nasri.

Any other bits of info?

TransferMarkt merely states that the player was not in the squad/on the bench on 9 occasions in 13/14 and 7 occasions in 12/13. Those absences may be due to injury or just rest days for a young player.

For that price we hope we are getting an accomplished, multi-skilled center back capable of playing against the best that the league has to offer and holding his own. He possesses pace, strength, he can play out from the back, he reads the game well (Pellegrini) so it looks like he possesses all the attributes required.

Mangala will have games, or spells in games, where he looks short and where the price tag will look like far too much money. This is to be expected. Mangala is still young for a center half, he will be playing in a new league with a higher quality of opposition and with a new, and sometimes difficult to play with CB partner in Kompany. There will be a bedding in period.

Mangala's price is a lot of money for someone that needs time?

Yeah it is, but this signing isn't like those of Navas and Negredo last term. They were players who could be plugged in and played without any real worries about their performance. Mangala is 23 and his peak years at yet to come.

This signing reminds me a lot of the method City have used to great effect in previous seasons: sign 23 or 24 yo's with enough past performance to give an indication of potential but still old enough at 23 that there won't be too much of a painful learning curve of the type that 19 and 20 yo's have to go through.

Examples of this type of signing?

How many league games can we expect from Mangala next season?

There's also the real possibility that he will be used carefully in his first season: no super tough away games against quirky opponents, Demichelis can handle those. It is also possible that Nastasic may be given soft game time, if he isn't sold, and Mangala could drop to the bench to make way.

Overall, Mangala's signing is a positive one for City but it comes at a huge financial cost in terms of transfer spend and likely a personnel cost in Nastasic being either starved of development game time or, even worse, sold outright.

This was a tough transfer chase and it's conclusion means that Mangala is the future of the left side of defense.

Mangala is the big winner, Nastasic the loser.