Looking Back, Moving Forward, and Ratings

More thoughts on yesterday's thriller, as well as a look to Portugal

Share All sharing options for: Looking Back, Moving Forward, and Ratings

Wow. What a game that was. Truly the full spectrum of emotions, ridden out on a rollercoaster.

Once the teams were announced, we knew how the US would approach the match. We saw this same exact lineup against Nigeria in the final warmup match, where flaws, tendencies, and benefits were abound. But this was not at all the same type of match.

It's tough to say what exactly produced the lackluster, overly defensive display from the Americans. It might have just been a bad day at the office, but one would think that Clint Dempsey's early goal also played a big part in the tactical approach to the final 89 minutes and 30 seconds. Add in the hamstring injury to Jozy Altidore and suddenly Jurgen Klinsmann is faced with a very different situation from what he had planned. But on the whole the team was sluggish in possession and almost looked as if they themselves were convinced that Ghana was a much superior team. It was akin to watching City come up against a compact Premier League team playing for a draw, with Ghana playing the role of City.

But all of that doesn't explain why Michael Bradley had one of his worst ever performances in the red, white, and blue. In the three warmup matches we saw an aggressive Bradley who usually was at the tip of a midfield diamond. That version of Bradley pressed high, disrupted the opposition's buildup play, and was the catalyst for team USA as it went at teams on the counter. We saw basically the opposite last night. Bradley sat quite deep and conceded a hell of a lot of space in the center of the pitch that allowed Ghana to camp out in the Americans' half for large portions of the match. My hope is that this was due to instruction from Klinsmann. The US can't afford to have this version of Michael Bradley take the pitch on Sunday against Portugal. When he plays well, the team plays well.

On the bright side, Jermaine Jones and Kyle Beckerman were fantastic and Timmy Howard came up with some big stops. One would have to think their full services will be required again against Portugal and Germany.

As for tactics, Jurgen Klinsmann certainly has plenty to think about between now and when the ball is kicked for the first time Manaus. The absence of Jozy Altidore means the entire thought process going forward will have to be reworked. Aron Johannsson is a decent player, but not at all the same style as Jozy. Then there's the prospect of Portugal. Fabio Coentrao looks certain to miss out through injury and Pepe is suspended (though that could arguably be a good thing for Portugal). Portugal will be weaker in defense and Klinsmann is going to need to find a way to exploit it.

One final note, on the US fan experience... unbelievable, is all I have to say. I live in Washington, DC, and this is quite easily the most patriotic I've ever seen the city outside of events like the inauguration, or when Bin Laden was killed. The game was conveniently placed at 6pm, which allowed time for fans to get out of work, throw on the kit, and get to the bar. I thought it would be safe to get there by 5:30, but I was quite wrong. A sea of USA kits was out on the streets in the bar areas, and my go-to spot for watching US games was so filled, that the line went out the door, down the block, and around the corner. I couldn't really believe what I was seeing; this is soccer in America after all. I ended up at a Spurs bar (great spot, good crowd) and I'm superstitious enough to return there for the next two matches and be in the same exact spot. It's great to see that the game is continuing to grow here, even if it is just for one month every four years. National pride is something that never gets old. 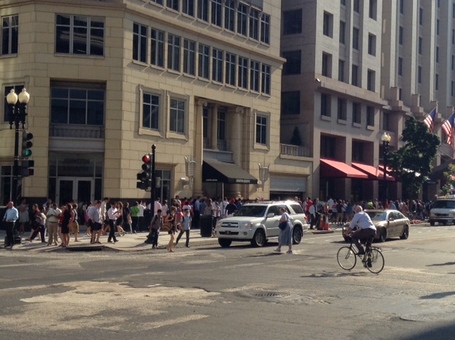 Now for some grades:

Howard: 9/10 - Not sure what else he cold have done. The goal was too much for him to save, and he was phenomenal outside of that.

Beasley: 3/10 - Wasn't sure if Beasley was sober or not for much of the match. He lost his balance too many times.

Besler: 6/10 - Did his job for the time he was on the pitch. In the second half, a few holes opened up where he previously was.

Cameron: 7/10 - It wasn't a spectacular night for the Stoke defender but he tackled well and was good in the air.

Johnson: 6/10 - He had one mistake when Ayew broke away from him and scored. But he ran his ass off up and down the right side and forced the corner that won the match off of pure effort and desire.

Jones: 8/10 - His engine never ran out and he made some huge tackles. He let his presence be felt wherever he was.

Dempsey: 7/10 - Outside of the goal he wasn't very active in the match, but then again he did get kicked in the face.

Altidore: N/A. Too incomplete of a game to really say anything. Just fingers crossed that the injury isn't too bad.

Johannsson: 5/10 - Didn't have many opportunities to touch the ball, but his distribution was pretty good.

Brooks: 7/10 - His goal was immense and he had some key blocks. But he also left a few holes in the defense and failed to pick up runners going into the box off of Cameron. Needs work for Sunday.

Zusi: 6/10 - His energy and hustle at a time when everyone else was a zombie was clutch. His perfect corner kick topped it all off.