World Cup Day Five: John Brooks the hero as the US beats Ghana

Dempsey's goal sets the US on their way only to later need saving by the unlikeliest of heroes.

Share All sharing options for: World Cup Day Five: John Brooks the hero as the US beats Ghana

A strange and exhilarating match, that!

Clint Dempsey’s wonderful goal just 29 seconds into the game gave the Americans a dream start, but as the game wore on, the US, according to Klinsmann, "Gave Ghana too much of the game."

A midfield diamond – without the diamond

Playing in a 4-4-2 diamond shape, with Beckerman sitting beneath and between Jones on the left, Bedoya on the right, and Bradley sitting at the apex on top, the US was always going to struggle in wide areas, but at least they would (hypothetically) be strong enough to control the game in the middle of the park. For whatever reason though – nerves, perhaps? or a desire to do too much – Bradley had a hard time staying at the top of the diamond, instead dropping deep into the midfield, often beneath Beckerman in an effort to start play.

By dropping off though, he took away a necessary passing option as Beckerman should have been responsible for the first stage of the USA’s buildup, looking to move it forward to Bradley. With Bradley dropping (and Beckerman staying deep) the forward options were greatly restricted by Ghana’s three man midfield. 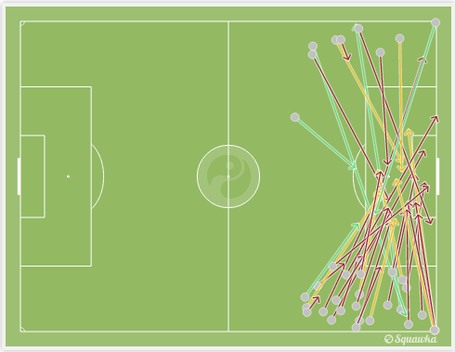 Ghana, like many of the other West-African countries, often relies too heavily on their physical prowess: pace and power over technical ability. Having little problem entering the USA’s final third, the Ghanians’ first option was always to whip a cross in, a strange tactic given America’s height and aerial advantage.

Ghana attempted 38 crosses in total (all but ten of them coming from Demarcus Beasley’s side) with hardly any of those troubling Tim Howard. Having seen the intricacies of Ghana’s well-worked goal, it’s forces the question: why not try more of that in and around the box? Instead, they consistently played into the strengths of centre-backs, Geoff Cameron (who was excellent all night), Matt Besler and John Brooks.

Like England on Saturday, the United States today suffered from a weakness on the left side of defence. While England's primary problem was caused by Wayne Rooney's inability to protect leftback, Leighton Baines, the US's came from make shift leftback, Demarcus Beasley, simply being unable to deal with Ghana's pacey forwards. Although Ghana's lone goal ironically came from the right, the left side of defense was consistently attacked and had Ghana's rightback, Daniel Opare, not been entirely useless, the US might have had further problems to deal with.

When Altidore was stretchered off in the 23rd minute, US manager Jurgen Klinsmann, was forced into an early change – and one that had rather disastrous ramifications on his side’s play. Altidore, who suffered a difficult season at Sunderland, appeared to finally turn a corner after scoring a brace in the USA’s final World Cup tune-up against Nigeria.

Indeed, he began so well against Ghana making intelligent off the ball runs and holding up play when the US looked to break. And this is what the US lacked after his injury – Aron Johannsson, who had a good Club season for AZ Alkmaar (incidentally, Jozy’s previous Club), is a completely different striker to Altidore. He isn’t strong enough to become the target man that gives the rest of the team an outlet through which to counter attack and he shouldn’t be expected to be. But that puts Team USA in a precarious position, because Klinsmann has built this team (or at least instructed this team) to attack on the break, using Altidore as the primary outlet – without him, how does the US go forward?

The second half saw Ghana clearly in control, and with  two substitutions used for injuries, Klinsmann had very little options by which he could change the game. Zusi eventually came on for Bedoya, but even that change may have been mandated by injury as Bedoya could be seen limping and grabbing his hamstring before and after the change.

It’s an interesting, if perhaps useless, thought experimentation to wonder how Klinsmann would have brought the Americans back into it. Would Bradley, who had a disappointing performance, made way for Mix Diskerud in an effort to play tidier passes in the middle of the pitch? Dempsey for Diskerud perhaps, and move to a five man midfield? Would Julian Green been introduced to bring pace on the outside? I remain skeptical that this US side has enough options on the bench ... making Landon Donovan's appearance in ESPN's television studio all the more difficult.

After Portugal’s opening tournament loss to Germany and likely without Pepe (through suspension) and Coentrao (through injury) for the next game, the US are now positioned as well as anyone might have hoped. What they – and Klinsmann – do from here, will go a long way in deciding the legacy of this World Cup.