The heartless mercenaries of Manchester City secured their second league title in three years with a final day win over West Ham at the Etihad.

Share All sharing options for: Together, indeed: City 2-0 West Ham

For perhaps the first time of the 2013-2014 season, Manchester City fans could exhale when referee Martin Atkinson blew the final whistle on Sunday at the Etihad.

Although the 2-0 victory over West Ham lacked the immediate range of emotions of the 2011-2012 finale against QPR, City still had to earn at least a point to hoist the trophy in one of the most interesting title races in recent history.

Even a scoreless draw would have done it, but Samir Nasri had a different view of things. The Frenchman scored in the 39th minute to give City the lead. West Ham failed to close down the midfielder, leaving Nasri with the time and space to let a shot go from distance. Although Adrian managed to get a hand to it, it wasn't enough, as the ball bounced into the net off the far post. The goal exemplified a great performance from Nasri, with a 95% pass completion rate and seven key passes (via WhoScored.com) earning him Man of the Match plaudits from many.

The Nasri goal would be all that was required to secure the title for City, but Vincent Kompany added a second four minutes into the second half when the captain quickly reacted to a deflection from a corner to put it home with his right foot from just inside the six-yard box.

From that point, the rest of the game functioned as a title celebration for the now-relaxed Etihad crowd. Even as Liverpool regained the lead over at Anfield, it was clear West Ham's parked bus would not have the horsepower required to make up the deficit. The always beautiful Poznan made an appearance, and Pellegrini even managed a few smiles after the final whistle.

Can we now erase the doubts of this team's connection, dedication, or any of the other euphemisms used to describe teams that don't constantly meet expectations? Even when considering the good fortune City was given by some of their opponents' results, City still won 16 of their last 18 points to edge Liverpool by two points at the top.

We can each point to various moments this season that disproved the notion of City as careless mercenaries--like persisting through the many injuries to key players, overcoming past difficulties at Goodison Park, individual recoveries in form like the one achieved by Martin Demichelis, or Edin Dzeko's hugely important goals over the final stretch.

Despite the wishes of many of City's rivals, it's possible to be highly paid-- in many cases, overpaid--and still maintain a strong spirit within the team. When we as observers attempted to describe the values and courage of a team before the season was even over, like we did when looking to give a reason for some of City's struggles, we ignored the fact that the fight was still to come.

In the end, it was the Liverpool squad who wilted, dropping points in two of their four matches after the victory over City. We've all observed the hysteria from Steven Gerrard's slip against Chelsea, but the shock 3-3 draw at Selhurst Park tilted the final day even further in City's favor. With their fiery rise extinguished by Crystal Palace and master fireman Tony Pulis, Liverpool were forced into the exact position City found themselves after Kompany's failed clearance at Anfield: hoping for mistakes elsewhere.

The mistake never came, though, and Pellegrini becomes the third manager, after Jose Mourinho and Carlo Ancelotti, to win a Premier League title in his first season in the league. One has to assume the Chilean's relaxed approach carried City through both the struggles and successes. Looking back, the squad never sunk too low, even after some of the more disappointing results, like the home draw with Sunderland.

In fact, Pellegrini never inserted himself too much into the headlines, and his most notable moment--in my eyes, at least--was dressing like a tourist in search for a hotel gym during the FA Cup quarterfinal against Wigan.

I'll be the first to admit I thought it was over for Manchester City after Coutinho netted Kompany's failed clearance at Anfield, but now, four weeks after being forced into the stress of needing a near-perfect finish, City are champions.

It's time for players and fans of Manchester City to finally breathe--together.

A quick look at the sports pages here in the UK this morning from regular commenter Graham Ward: 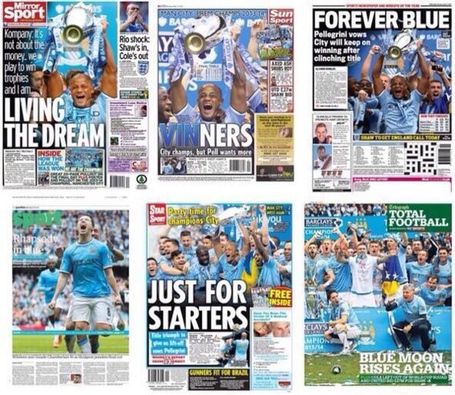 And I thought I'd share this shot that I took minutes after the final whistle: 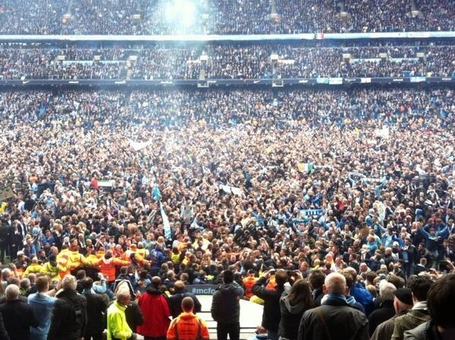