Palace 0 - 2 City: On Balance, Defence and the Ubiquitous Influence of Yaya Toure

Basking in the news that the Premier League title might just be back in their hands, a professional City, backed by Yaya Toure's superb performance and an unequaled defensive display, left Selhurst Park with three precious points.

Share All sharing options for: Palace 0 - 2 City: On Balance, Defence and the Ubiquitous Influence of Yaya Toure

With Chelsea’s rather surprising 2-0 win earlier in the day at Anfield, City walked onto the pitch at Selhurst Park knowing twelve points from the next four games would almost certainly (in the back of my mind exists the very real possibility that Liverpool make up the goal difference in their single game against Newcastle) be crowned Premier League Champions.

It was because of that newly gained knowledge (and added pressure) that the result was such a surprise – in all honesty, when was the last time we’ve seen City treat such a "tricky fixture" in such a comprehensively professional manner? Pellegrini was pragmatic, the team was focused, and the result ultimately came rather easily. Indeed, it was exactly the opposite of the "Typical City" performance that was so widely feared.

It’s always difficult to write a piece like this after so many have already acknowledged the primary reasons for success, but I shall try my hardest and apologize in advance for the repetition you will no doubt notice. City were magnificent due to three primary reasons: Yaya was at his influential best, providing the assist for Dzeko’s opener followed by what many will label his best goal of the season; Javi Garcia’s presence behind him allowed Yaya to essentially shirk all tactical and positional responsibility in the defensive third; and City’s defensive shape prevented Palace from ever really testing Hart.

It seems obvious to start with Yaya’s performance first, but in truth, it seems impossible to separate his from Garcia’s, so they'' be treated as extension of each other. It’s no secret that Pellegrini has gotten the most out of Garcia, who under Mancini, looked nothing like the player City bought from Benfica for £17.776.000. His performance on Sunday though, will certainly stand out as his best in a City shirt. Shielding the back line perfectly, while preventing Palace’s counter-attacks from troubling City’s defence (something that has surely become one of Pellegrini’s biggest headaches), Garcia sat beneath Yaya, calmly recycling possession and acting as the foundation of City’s buildup play.

Because the performance of the deepest lying midfielder is often difficult to quantify – especially is Javi’s case as he rarely boasts obscene passing or tackling numbers – it might be best understand in the following images. Below are the heat maps, passing charts, and action areas of both Garcia (on the left) and Yaya (on the right). 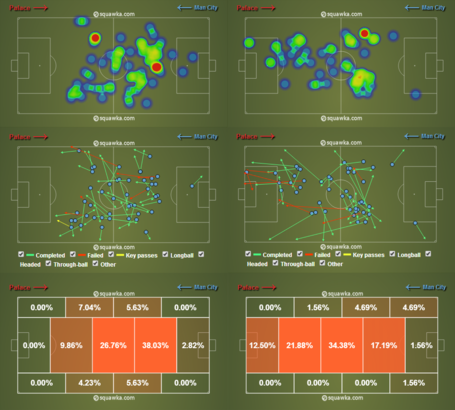 I know I’ve harped on the importance of balance before, but it remains the single most important element to City’s success. (Think back to City's title winning season in 2011 – outside of Kompany, who was the most important player to that side? I contend it was Barry, whose influence, while perhaps less noticeable than others’, was always felt in the matches he wasn’t available.) While it may have seemed unnecessary to stress or emphasize balance in the earlier parts of the season – you remember that, right? When Sergio & Co. were scoring at an unprecedented pace – as the scoring rates began to dry up and as injuries began to mount, it became clear that if City were to succeed, a team-wide balance would be required.

When Garcia plays in place of Yaya or Fernandinho, City find a more appropriate balance in midfield. As good as Fernandinho has been in this, his debut season, he and Yaya function more as a double pivot than does either pairing with Garcia. In fact, I’d claim Garcia never goes forward at the expense of Yaya or Fernandinho. His role rather is simple: to sit beneath his midfield partner, allowing him to advance without concern to City’s defensive shape. In possession, outside of providing the midfield base, he is not involved in any part of the offensive phase of play. He begins City’s transition from defence to attack with a simple pass, either to fullbacks or to the midfield partner, and his positional and passing charts bear this out.

I know what you're thinking, "Enough with balance, you old broken record!" Fine, let's talk about City's impressive defensive display. While it's no secret that Tony Pulis' sides have hardly been offensive juggernauts, they have always offered a counterattacking threat, with the primary danger coming from crosses provided by speedy wing play.

On Sunday, though, City never looked susceptible to the Palace attacks, be them from the wings or through the middle. In fact, Palace entered City's penalty area through passing just three times. Three. As in uno, dos, tres. A incredible achievement from the back four and Garcia. Defensively, there was a concentrated effort to marshal Palace away from Hart’s area and to the wings – something the home side were readily willing to accommodate. Indeed, it was one of those strange times when both sides wanted the same thing: to funnel play to the wingers and force the attacking threat to come in the form of crosses, a battle that City unquestionably came out of the victors.

Led by the unerring Demichelis, City dealt successfully with all 19 Palace crosses. Yes, you read that correctly – Palace completed zero of their attempted crosses, with Demichelis leading all City players with 12 clearances (interestingly, it was Zabaleta (7) and not Kompany (4) who was second).

While I didn't have to include that image, I chose to because quite honestly, I find it beautiful. Just look at the City's penalty area: after ninety minutes of football, it's nearly unentered. In a match of such great importance, City defended as well as they have all season, while avoiding the types of individual errors that have cost so many points already.

And while Saturday's match at Goodison is an entirely different challenge than that encountered in Selhurst Park, City's balanced and professional approach against Crystal Palace proves Pellegrini's side is rounding into perfect form at the most important part of the season.