Arsenal 1 - 1 City: Stalemate at The Emirates

Or, how Arsenal and City mirrored each other's shapes and found a 1-1 draw as a result.

Share All sharing options for: Arsenal 1 - 1 City: Stalemate at The Emirates

And rightly so, as City, just as they did midweek at Old Trafford, jumped all over the home side, eventually scoring in the 18th minute on David Silva’s rather fortunate tap-in.

Pellegrini again fielded a single striker side, rightly making no changes from the starting eleven that romped at Old Trafford. Wenger meanwhile, made just one change from the Arsenal side that drew midweek to Swansea: Oxlade-Chamberlain made way for Podolski, in a change that saw Rosicky switch from the left side of midfield to the right (although like Silva and Nasri, Cazorla and Rosicky interchange at random). 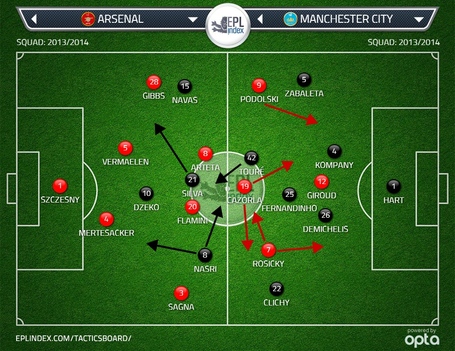 As has been the case for the last two games, Pellegrini played Silva "in the hole," allowing the Spaniard to nestle in beneath Dzeko and find the right flank quicker than if he starts on the left. And twice, in as many games, City began with a deliberate overload to the opponent’s left flank; and again, like United before them, Arsenal struggled to quickly adjust to a City attack that featured Navas, Zabaleta, Silva and Dzeko’s presence all pushed to the left half Szczesny’s goal.

This tactic against United was ever so understandable, as Moyes originally fielded a 4-3-3 with Welbeck high on the left, leaving Fellaini to cover the space between the front line and United’s woefully out of form left-back, Patrice Evra. The result of course, was City scoring after just 43 seconds on their third chance of the game – truly, an incredible start.

Against Arsenal, it might simply have been a case of Pellegrini thinking "Well, if it worked so well the first time, let’s have another go at it." Or, it may have been Pellegrini’s astute awareness of Podolski’s tendancy to isolate his fullback in defence, as the German isn’t quite as reliable as others when it comes to tracking his opposing runner. Either way, it worked a charm, as City pushed the tempo from the off and had Arsenal quickly on their heels.

Outside of Liverpool, it’s difficult to think of any team in the Premier League that plays with more freedom in attack than either of these sides. As I mentioned earlier, Silva and Nasri are the same type of player and neither are at their best when cemented to a specific position – hence the constant and fluid movement that pulls defenders out of position. So too, are Arsenal’s host of midfielders, although Podolski does like to play from whichever wing he’s supposed to be occupying. Cazorla and Rosicky though, are an almost mirror image to Nasri and Silva, constantly roaming from one side to the other, pulling defenders and causing overloads. Even Dzeko and Giroud share similarities in their movement, strength and touch.

Arsenal’s double pivot – and truly, Arteta and Flamini when played as couplet in midfield are as much a classic double pivot as exists in the game – struggled out of the gates, both in containing City’s central midfielders, but as well as moving the ball forward and dictating any sort of tempo. Indeed, this more than any other facet of the game, was the reason for Arsenal’s first- and second-half discrepancies.

After the break, they found the necessary and previously unattainable rhythm that passing sides rely on from their central midfielders: receive, recycle, repeat. It’s what allows the more creative players in front of them to constantly drift. And, if one moves forward, the other covers. It’s the simple ethos of the double pivot. And it worked to perfection in the play that led to Arsenal’s equalizer. 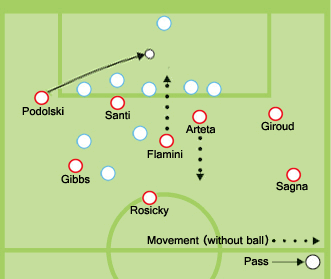 The diagram on the right (shamelessly
stolen from Arseblog.com, in a tactical review that can be found here), you can see the movement and fluidity from almost every forward player in the Arsenal side. Giroud’s taken up a position that a winger generally would, while Arteta and Flamini are both further up the pitch than Rosicky – a rarity, that left Yaya perhaps unsure who to mark. And as Flamini begins his clever little run into the box, Arteta notes the movement and himself drops off, causing further movement for City’s midfielder’s to account for. Of course, it helps that Fernandinho falls at exactly the worst moment, but it shouldn’t confuse the fact, that City’s defenders, without Arsenal’s striker to use as a point of reference, struggle to position themselves in the appropriate places. The midfield triangle of Navas, Silva, and Nasri (unnamed in the diagram, but positioned between the midfield triangle of Gibbs, Santi and Flamini) is in fact a disaster, as they’re effectively marking none of the danger players in their own defensive third. A general rule: when in doubt, midfield triangles are only good in the middle and final thirds and when that triangle is in possession.

I must admit, considering the lack of control City maintained in the second half, especially when juxtaposed to the first, I was a bit surprised at Pellegrini’s reluctance to make changes earlier than he did. And perhaps this is all a moot point if City had managed to take a two goal lead in the moments leading up to the Arsenal equalizer, but it was quite clear that City were struggling to cope with Arsenal’s halftime adjustments and substitutes looked necessary. And while his substitutes implied he was happy with a draw, it's hard not to think Pellegrini took off City’s then most dangerous player (Navas) for one who made almost no impact (Milner). Instead – and obviously with the help of hindsight – City would likely have been far better served to bring Garcia on for one of Silva or Nasri, move Yaya further forward (which likely would have forced Arteta and Flamini deeper) while playing Garcia as the deepest midfielder.

One final point to those unhappy with the result: a point away to Arsenal (where City have managed just 15 wins in 88 attempts) is not a bad result, even at this point in an already tight title race. To  borrow a dreadful and oft-overused saying, the title is still in City’s hands – and that, if nothing else, should help us sleep tonight.