After a brilliant match that saw City leave Anfield empty-handed, it's hard to ignore the effects of City's repeated individual errors.

More than anything else, this season should – and likely will – be defined by individual errors at the most inopportune times. The mistake against Villa came first, followed by Cardiff and Chelsea. Then, in the worst week of the season, individual errors saw Cup exits against Barca and Wigan. Feel free to now add Liverpool to that list, after Kompany's disastrous mistake gifted Coutinho a sumptuous chance that the Brazilian finished with aplomb.

Hard to account for, and even harder to correct, the individual error is often the great equalizer. Yet even still, City leave the less than friendly confines of Anfield wondering what might have been. Having yielded twice not twenty minutes in – while also looking confused, unorganized and uninterested – the game began to turn in the minutes leading up to the break.

Sterling, who opened the scoring with a sublime finish that left Hart and Kompany in shambles, cleared a Kompany header off the line, while moments later Mignolet made a smart diving save to deny Fernandinho. 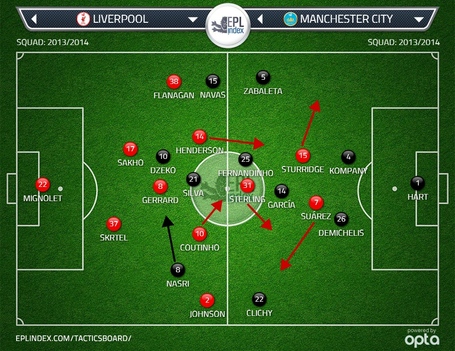 Liverpool’s shape frustrated City in the opening half an hour, as the four man midfield diamond is capable not only of keeping the ball, but in interchanging positions and exploiting open space in seemingly any place on the pitch. While Sterling might begin play operating mainly at the top of the diamond (also defending in the middle of the pitch) and Coutinho on the right, the two interchange positions at random, as Coutinho prefers to drift inside, allowing Sterling a plethora of vacated space to move into. Gerrard, sitting deep to shield the centre-backs and build the play from the back, is protected by Henderson – who, on account of his strength, engine and commitment to the structure,  makes the ideal midfield partner.

At the front of course, are the Premier League’s leading strike partnership, the (apparently) unstoppable SAS (Suarez and Sturridge). Their movement, much the same as Sterling and Coutinho’s, makes defending a nightmare: they drop deep, they drift outside, and they make runs in behind. And to be fair, Demichelis did quite well with Suarez for much of the game. (The same rather obviously can’t be said of Kompany.)

Pellegrini, likely because of City's turnaround shortly after Liverpool’s second goal, elected not to make halftime changes, keeping the same eleven after intermission. Having suffered through six more minutes without a breakthrough however, Pellegrini had apparently seen enough. On came the ever reliable, oft-underappreciated James Milner – who's more than earned a new deal that henceforth has yet to arrive –and undeniably turned the game in City's favor.

Milner brought everything that Navas had previously lacked; strength, penetration, chemistry with Zabaleta and a numerical overload in the middle – something that Rodgers was slow to react to, but did eventually sort out with introduction of Joe Allen.

City's poor start came from two tactical errors: (1) they (like each opponent before them) struggled mightily against Liverpool's pace up front and (2) a systematic failure to effectively press Liverpool’s midfielders, who began the game by playing long diagonals and through balls to the fullbacks and attackers.

Insistent on a high line, Pellegrini's side was repeatedly beat by the through balls played in from Gerrard, Coutinho, and Henderson. The first goal was especially a result of this action, as neither Fernandinho or Kompany tracked Sterling's run from the midfield and Demichelis had (correctly) stepped up to mark Suarez.

As previously mentioned, second half saw the two real moments of managerial influence: Milner's introduction shifted the balance towards City, until Joe Allen entered for Sturridge.  Milner's presence offered City two tactical improvements: (1) the ability to finally push Flanagan deep into his own half and (2) another player unafraid to drift inside (Navas had previously hugged the touchline) thereby allowing City for the first time, to trouble the Liverpool midfield. Indeed, it was only after this change (and before Allen's introduction) that City scored the two goals that equalized the game.

Credit to Rodgers though, who, at the pivotal moment of the match, had the tactical wherewithal to remove his (admittedly injured) striker for a central midfielder. Allen’s introduction changed much of the match, as Liverpool began to see more of the ball, subsequently allowing for a more advantageous tempo for the home side.

While I haven’t yet mentioned Yaya’s injury, it’s because it came rather early, and it’s difficult to know just how much it changed City’s play. Obviously Fernandinho moved further forward, allowing Garcia to play in his preferred position, and to be fair to him, Javi protected his centre-backs better than they had previously been shielded while also minimizing the space between the lines. In a game of this magnitude, it was refreshing to see City respond so well to the loss of as pivotal a player as Yaya is, while simultaneously shifting systems in the midfield.

Sadly for City, it appears that Anfield brought out "Mr Dzeko" – the evil and less useful version of Dr. Edin’s split personality. You’ll forgive me the poor analogy, but I’ve found no better way of understanding City’s Bosnian striker than by borrowing from Robert Louis Stevenson’s 19th century novel. Some games, Dzeko looks a goal-scoring world beater while others he cuts an uninterested and forlorn figure; and on Sunday, he was disappointingly the latter – useless in his pressing and ineffective in his offensive contributions.

Before we close, it’d be a shame not to talk about David Silva – something I’ve avoided hereto in an effort prevent boredom on your part, dear reader. He’s the catalyst of all good things at the moment and if I wasn’t careful, these little tactical musings might read more like Psalms of to David and less like football analysis. Regardless, Sunday was no different from any of the other games in the last few weeks; it often looked as if he had a protective bubble around him affording him five yards of space wherever his little feet took him. Indeed, City’s Merlin brought the visitors back before coming just wide of putting them in front on wonderful bit of play with Aguero. In times like these, it’s hard not to wonder if City don’t just have the best Spanish midfielder in the world.

While the result was quite obviously annoying, the title is not yet lost and hope is not yet gone – Wednesday brings a quick and much needed chance to put this in the rear view, while hopefully converting one of two games-in-hand into three points; three points that would close the gap at the top to just four.

Onward then, and may Merlin guide you home.