Share All sharing options for: Vincent Kompany In Injury Scare

Concerning news ahead of tomorrows lunchtime showdown against Liverpool in that captain Vincent Kompany is reported to have limped out of training with a knee injury.

The below stills do not make for comfortable viewing although it must be stressed that no official word has been forthcoming as to the extent of the injury or his status for the game. 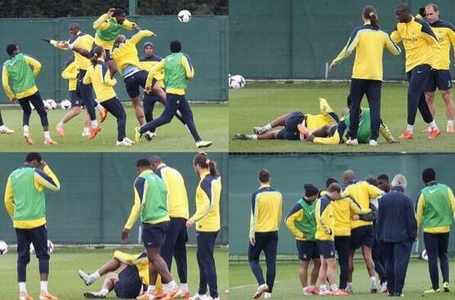 As an aside, as pointed out to me on twitter earlier, if we can read anything into the bibs v non-bibs set-up it suggests that despite being fit Sergio Aguero will not start tomorrow.

UPDATE: Daniel Taylor of The Guardian has tweeted that City appear fairly relaxed over the injury and that Kompany has joined up with the team at their hotel.

#MCFC seem pretty confident Vincent Kompany will be fine for #LFC game. He's with the squad (at hotel) despite injury in training