Manchester City's 3-0 win at Old Trafford gives them a derby double and draws them within three points of Chelsea.

Share All sharing options for: United 0-3 MCFC: "Fergie, give us a wave"

United settled down a bit and threatened after 20 minutes, but City weathered the quick storm and carried the one-goal lead into halftime.

Dzeko added his second on a right-footed volley from a Nasri corner in the 56th minute. After dancing past the charitable Patrice Evra, Yaya Toure added the third as the game moved into stoppage time.

City move to within three points of Chelsea with the victory, with two matches still in hand over the league leaders.

It didn't even require a great performance from City to dispatch United. Despite the boost from last week's Champions League comeback against Olympiakos, United looked far too tired from chasing their own demons to really have a chance against City. The talent disparity between the available players was readily apparent, also. One would think an All-Manchester XI would contain about eight City players at this point.

As many expected (or hoped), Manuel Pellegrini selected just a single striker in the absence of Sergio Aguero. Dzeko entered the side, but the real surprise came in midfield. Rather than insert Javi Garcia, Pellegrini elected to use his extra midfielder in the attacking band. Samir Nasri, David Silva, and Jesus Navas exploited the disorganization in United's midfield, especially when Dzeko got involved in build-up play.

Vincent Kompany returned from suspension to partner Martin Demichelis in central defense. Pablo Zabaleta continued at right-back, and Gael Clichy gave one of his better performances of the season on the left.

While outnumbered in theory, Fernandinho and Toure did not need Garcia to assert their dominance over the United midfield trio of Michael Carrick, Tom Cleverley, and Marouane Fellaini. Cleverley only managed a half before being taken off for Shinji Kagawa, and Fellaini was replaced by Valencia after 66 minutes. Carrick wasn't too bad, but the lack of presence from the other two created a very open game.

Toure and Fernandinho both passed efficiently, 92% and 91% respectively (according to WhoScored.com). Garcia was City's first substitute after 68 minutes, replacing Navas and pushing Toure forward. The Ivorian would eventually score as a result of the freedom he and Fernandinho were afforded in Garcia's presence.

It was a good performance from the defense, who had to deal with a United team that trailed for essentially the entire game. Kompany's return to the lineup also coincided with good performances from the rest of the back four--and, thankfully, no Demichelis arguments this week. It helps that United were without Robin van Persie, but City were able to hold Wayne Rooney scoreless, which is rare when the two teams meet.

Even Clichy, making his 14th performance of the season, played well. He led all players with nine interceptions, and his passing combination with Nasri tied Silva and Toure's as the most frequent.

With the April 13th trip to Anfield looming in the distance, the defense playing with confidence is vital.

City's defense was interrupted by Marouane Fellaini's interesting method of ball control, though. Somehow, Fellaini wasn't sent off for elbowing Zabaleta in the first half. He did, however, provide an suitable audition tape in the event Vince McMahon ever decides to create a Premier League version of the XFL.

As City prepare to journey to the Emirates for another important match with Arsenal on Saturday, I leave you with Moyes in deep thought. 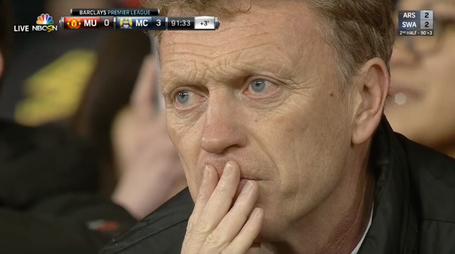