Or, how one of the City greats managed a Cup upset (or Cupset, if you will) that will long be remembered.

With a trip to the quarterfinals on the line, Pellegrini opted for a back four that even before the match must surely have put hearts in mouths. Richards replaced Zabaleta at right-back, Demichelis (trust me, more on him in a bit) partnered Lescott in central defence, with Clichy (who doesn’t appear to have fully recovered from McManaman’s MOTM performance in last year’s FA Cup Final) at left-back. In midfield, Garcia sat beneath Yaya in the middle with Navas and Nasri on either side; at the top, the once-feared strike partnership of Aguero and Negredo. 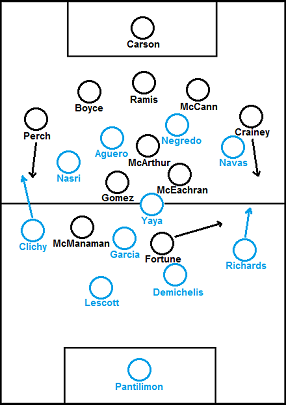 Wigan meanwhile, played in a 3-5-2 that often looked a 5-3-2, as James Perch and Stephen Crainey played more as defensive fullbacks than attacking wingbacks. The three central defenders – Emmerson Boyce, Ivan Ramis, and Chris McCann – proved more than capable against Negredo and Aguero, marshalling the back line that proved the catalyst for Wigan’s Cupset.

In the midfield, Uwe Rosler employed a midfield triangle that dealt quite well with Garcia and Yaya – and like Poyet has done previously, showed the proper way to counter a two-man midfield. It was James McArthur sitting beneath Josh McEachran and penalty-scorer, Jordi Gomez. Above them, and providing an interesting wrinkle, were Callum McManaman (who continually drifted out wide) and Marc-Antoine Fortune, who managed to provide a two-man outlet on the occasions that Wigan won the ball in their deep defensive shell.

Going forward, the problems were obvious: too few attackers against too many well-organized defenders. Clichy and Richards offered too little offensively (at least through the first hour) resulting in predictable attacks, that saw Navas continually isolated on the right against McCann and Crainey, while on the left, Nasri came inside which only played into Wigan’s defensive strengths – namely, a numerical advantage in both the center of the pitch and their defensive third.

Defensively though, City weren’t especially poor, and had already begun to boss the game, so to speak, when Demichelis went ahead and made, what at this point can no longer be considered an out of character, reckless challenge conceding the penalty. Now, having re-watched the challenge in every possible angle and with several different replays, it makes even less sense than it did live. While he’s been turned at the byline, he hasn’t left Pantilimon alone with attacker as Lescott is in a comfortable position, with Clichy not far behind him – facts, that Demichelis should be aware of, as they’re playing out directly in front of him.

His tackle on Messi two weeks back showed his pension for risk and incredibly, nothing has changed. Twice in a two weeks, he’s made challenges that, without perfect execution would result in penalties (and once a red card to boot) and twice he’s come away shaking his head in awe as he failed to win the ball. In both cases, the problem is his Rambo-esque attitude that takes precedence over the safe option: let the player shoot at goal and try to convert a chance that’s more difficult than a penalty. I’m not typically a fan of scapegoating players, but in the case of Demichelis he’s become a liability to the Club and the goals it’s set – it’s beyond me how he can continue to be played.

Rant over, my apologies.

Now while the loss is disheartening, it’s not the end of the world, as the League Title is still very much in play, and a proper good result against Barca could keep us European dreaming. The more pressing concern is two-fold: 1) City have managed just one goal in the first half of the last seven matches and 2) the strikers still aren’t scoring.

Nasri himself addressed issue #1, saying in the post-match press conference, "We did exactly the same as the Capital One Cup Final – we woke up after 65'. Except this time we were 2-0 down and we can't always score 3 goals . . . We only woke up and played for 30 minutes. At this level you cannot do that because any team can beat you."

It’s a rather baffling problem that I really don’t have an answer for. I refuse to believe that the players think they can beat any side they play without showing up, when they’ve already seen time and again that that just isn’t the case. And I also don’t subscribe to the lazy narrative that we’ve purchased and employ mercenaries without heart – I think anyone whose watched these players knows they care about the Club. Whatever the issue, it’s a problem that’s now costing City trophies and needs to be clearly addressed – so to that I say "Good luck, Pellegrini."

Finally, it’s now been 907 minutes since any of City's three primary strikers have scored a goal: Aguero 148', Negredo 328', Dzeko 431'. That’s a problem, especially because Pellegrini insists on playing two of them at a time at the expense of another midfielder. Aguero’s streak is obviously the least worry as it’s not even two full games and he’s just returning from injury, but it’s still a long shot off his earlier form, when his goals per 90 was at an elite level. As for Negredo and Dzeko, the former has looked off for quite a bit while the latter might be running quite low on confidence. Either way, it’s hardly a recipe for success.

On a lighter note, the second leg in Barcelona is now directly in front of us, with the chance (no matter how small) of a historic result that could see City advance to the quarter-finals of the Champions League. I’ve written elsewhere how I thought parking the bus was a problematic approach to the first leg (and one that ultimately didn’t pay off – but how much of that was tactical, we won’t ever know), and am admittedly an advocate for a 4-2-3-1 against the Catalan giants.

I’d play Aguero alone up front, with Yaya in the #10, flanked by Nasri and Silva, supported by Fernandinho (who I think could be pivotal in a true box-to-box role) and Garcia; while a back four of Kolarov, Lescott, Kompany, and Zabaleta protect Hart’s goal. Onward then, and may we be carried to European Glory!