Let’s get two things out of the way: Chelsea were very good and City were rather bad. But to suggest that this was a doomsday sort of turning point in the City season as some are proclaiming is nonsensical. Key injuries were as much a reason for defeat as Mourinho’s admittedly brilliant tactical performance, and Pellegrini, apart from reverting to a single striker system, really had very little choice in his starting XI.

Right, now that that’s behind us, formations.

City, forced by injuries to Fernandinho and Javi Garcia, began the match with Martin Demichelis playing in central midfield (a position he actually played rather well in against West Ham). Ideally, it should have allowed Yaya more freedom to move forward. In reality however, it hindered City’s presence moving forward and offered the back four very little protection. In hindsight then, it’s rather easy to criticize Pellegrini for (a) playing a two striker system and (b) not playing Milner in midfield. Yet even in hindsight, I don’t believe either of those decisions would have actually fixed City’s problem on the night: namely, a disastrous defensive showing. 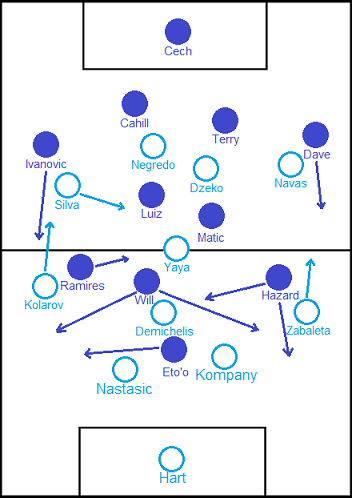 Having seen the team sheets, many (myself included) believed Mourinho had brought his now infamous bus to Fortress Etihad, in an attempt to restrict City’s free-flowing, swashbuckling (sorry, I had to use the word at least once) football. My assumption, like many others, was that Ramires would sit in front of Matic and Luiz and would only venture forward in extreme scenarios. This though, is not at all what happened.

Whether it was because of Demichelis’ surprise presence in central midfield or if it was a pre-determined decision, Mourinho moved Willian from the wing to the center of the midfield to play the #10 position, thereby pushing Ramires from the middle of the pitch to the wing. This meant Chelsea’s formation was far more 4-2-3-1 and far less the defensive 4-3-3 that Mourinho has often championed in the past.

The result? Well, a devastating counterattack that looked the same each time Chelsea got the ball. One of Luiz or Matic would move the ball forward as quickly as possible (often looking for Hazard and Willian) and then both stop once they gained the halfway line. The fluid front four of Hazard, Willian, Ramires and Eto’o would then move interchangeably in the final third (with Ramires almost always drifting into the center) until passing lanes were opened or space was created for the ball carrier to move into. The latter can be seen in Hazard’s repeated dribbles from the right side of City’s defence to the left.

You'll note in the diagram, how Yaya appears to be rather isolated in the center of the pitch, positioned almost directly above Demichelis. This was done to reinforce the fact that City's two central midfielders hardly played with any sense of partnership. Instead, Yaya continually found himself in no-man's land, often providing Demichelis little help.

It was rather strange (and inconceivable really) that City’s defence was routinely bested because of little more than seemingly random movement and great dribbling. Zabaleta was especially poor on the right in what often became a one-on-one battle with Eden Hazard, who for my money was Man of the Match. (Increasingly, Hazard looks genuinely Ribery-esque on the ball: the type of player whose speed and balance hardly seems to change with the ball than without.)

Chelsea’s goal is a rather fine example of this movement: Hazard cuts in and quickly passes but most importantly, he continues to move, travelling all the way across (and behind) the back four onto the left side of City’s box where he receives the ball from Ivanovic and plays in Ramires for the intial shot that Hart parries to Ivanovic (who is in acres of space, because as has been mentioned in other areas, Yaya Toure is a rather average player when not in possession).

At the time of the goal, I remarked on Twitter "Yaya's failure to drift out to Ivanovic on Chelsea's goal is both parts confounding and infuriating" -- an opinion that I continue to stand behind. And while many believe it's the type of move that Fernandinho has routinely cut out since joining City, the blame should be directly more towards Yaya than Demichelis; an opinion that I find to be validated through this fantastic graphic, courtousy of one, @Drogbastic:

Chelsea goal break down: Demichelis out of position. Yaya picking up no one. Too many options provided to Eden, bang! pic.twitter.com/N0qQKpTI5j

Firstly, why is Demichelis where he is? Ideally, he would be sitting directly between Willian and Ramires in the space between Kompany and Nastasic, forcing Hazard to play the ball across the six yard box in hopes of reaching Eto'o (a pass that City are actually defending well enough). This is the criticism that leads to the aforementioned argument that Fernandinho likely snuffs out the danger before it occurs. Secondly, how can Yaya not understand what's happening and position himself accordingly? He's obviously too late to drop deep enough to defend Willian or Ramires, but he's already looking in the direction of Ivanovic and moving three paces that way would cut out the right-back's path towards goal. A vital mistake on what might eventually prove to be a vital goal.

It might at this point seem rather doom and gloom, but for as good as Chelsea were over the entire course of the ninety minutes, it’s not hard to argue that City were the superior side through the first twenty and still better than Chelsea until the visitors' goal. Indeed, had the finishing been better the home side may well have been the "high-flying Blues" we’ve grown used to since Pellegrini’s arrival. The charts below shows City’s shots through the first half. On the left, the first twenty minutes: the two coming from the right side of goal loom the largest (and that’s not even showing Yaya’s "miss" on the Kolarov cross) as Silva and Yaya failed to hit the target when presented good opportunities. In the middle, the first thirty-two minutes (the time of Ivanovic’s goal) and on the right, total shots in the first half.

11 shots, 1 on target: it's rather hard to win a football match with numbers like that.

As mentioned before, outside of changing the formation, Pellegrini had very few options regarding his starting XI. Indeed, as I see it, the Chilean had just two choices: play the usual 4-4-2 with either Demichelis or James Milner in a defensive midfield position, or revert to a 4-2-3-1 with one of Jack Rodwell or Milner sitting in a double pivot beneath Yaya. Without Aguero at his disposal, Pellegrini might well have been more suited to play only one of Dzeko or Negredo and hope that an additional midfielder might soften the blow of Fernandinho's (and even Javi Garcia's to an extent) absence. But this choice really does seem easier in hindsight, having witnessed how poorly City defended Chelsea's front four -- most likely a choice that very few would have advocated for prior to the game.

Was it then, a match determined by Mourinho’s superior tactics or by a terrible combination of City’s poor shooting and unfortunate injury crisis? Both could (and perhaps should) be argued, although City rarely seemed capable of defending Chelsea’s fluid front four and Pellegrini, as has been a problem at other points this season, seemed slow to make any appropriate adjustments. And as the season progresses, it becomes more and more evident that this City side aren't very good without the ball. Individual defensive errors, poor positional play and a holistic (get it?) failure to play inside of a single defensive system may well continue to be a problem moving forward.