Pellegrini’s defensive tactics and formation tweak prove ineffective against the Catalan giants, as Barcelona – aided by an absurd Demichelis tackle – defeat City in the first match of the two-leg tie.

A strange game, that. Some will say a harsh scoreline while others will say Barcelona should have put the tie completely to rest having almost forty full minutes of a man advantage. I’m somewhere between the two and certainly think City could have made more of their chances or opted for a more attacking lineup. It’s strange too, that Pellegrini would field a lineup in the home leg that many would expect to have seen at Camp Nou in an effort to "hold on." I had previously advocated an attacking lineup that would force Barcelona to match City on goals (after all, isn’t that what City do), but Pellegrini instead opted for quite the opposite.

The primary talking point will surely be Demichelis’ ridiculously poor "challenge" and subsequent red card; but to be honest, I though City were the better side for 80-85% of the time that Nasri was on the pitch. 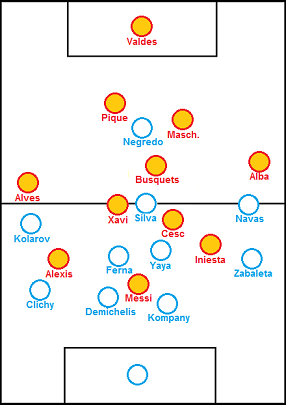 It was a rather surprising 4-4-1-1 (that at times looked a 4-2-3-1) with Negredo the lone striker and Silva playing behind him in the #10 – a position he played incredibly well in – flanked on each side by Kolarov (sadly, you read that correctly) and Navas. Fernandinho made his return to the side, partnering with Yaya in the middle of the pitch. The biggest surprise though, was seeing Demichelis preferred to Lescott, who was tremendous against Chelsea, or Nastasic, who Pellegrini clearly lacks the necessary trust to play in the "big games."

Meanwhile, Tata chose a formation that emphasized possession at the expense of cutting edge – a fact that could be seen rather clearly at halftime, when Barcelona led comfortably in possession statistics but lacked any obvious chances or dangerous penetration. Fàbregas joined Busquets and Xavi in midfield, which meant Iniesta to the left wing, a decision that manifested itself in a lack of forward wing presence on that side. Importantly though, he deployed Alba in a deeper-than-usual position, conservatively positioned and rarely willing to move into City’s final third – at least prior to the red card.

Pellegrini’s decision to start both left-backs (unsurprisingly) backfired, as Dani Alves drove Kolarov back from the first minute to the last – in truth, his 90th minute goal gave this game a rather appropriate level of symmetry. Pellegrini surely wanted Kolarov-Clichy on the left for three reasons: 1) Defensively, it was the "easiest solution" to dealing with Alves; 2) As Messi often drifts to his right before cutting back inside onto his left, a double fullback pairing on the left might keep City from being exposed to a Alves-Alexis-Messi overload; and 3) Playing Kolarov in front of Clichy meant, at least hypothetically, that that one of City’s best crossers could get forward without exposing space behind.

Instead, Kolarov looked clueless as an offensive outlet, continually unable to find the necessary space to start counter-attacks while offering too little going forward. Defensively, he managed to miss on all five of his attempted tackles (three of which were against Alves), while providing little desistence to his Brazilian counterpart’s offensive forays. Indeed, had Alexis not twice intercepted passes that were intended as through balls to Alves, Kolarov would have been even more exposed than he already was. 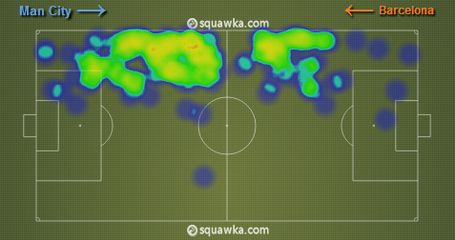 In some way though, I suppose there’s a small bit of vindication in Pellegrini’s decision, as Barcelona’s only goal from open play come from the right as Neymar and Alves left Clichy and Lescott for dead before the fullback fired between Hart’s legs.

Strangely, Demichelis was – at least in his defensive capacities – actually quite good prior to his sending off. With Messi often dropping off the front line and to the right side of the Barcelona midfield, it was left to Demichelis to step up and prevent Barca’s #10 from turning and dribbling towards City’s backline. This I thought he did rather well, routinely stepping out from the back line to close down this space, make interceptions, or attempt tackles. 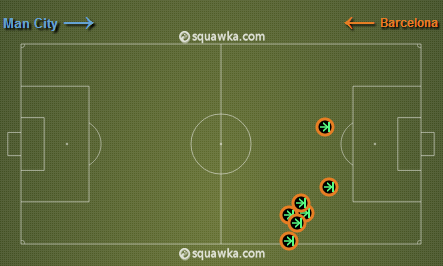 As mentioned above, when City played with eleven men, Alba remained deeper than usual; a clear reflection of Tata’s respect for City’s breaking abilities, Navas’ pace, and the importance of a balanced Barcelona. While it’s obviously impossible to know if it was a last minute piece of instruction having seen Pellegrini’s two fullback pairing on the left or a fully planned strategy, Alba’s deeper positioning was a key component to stifling City’s counter-attack (or lack there-of). With Kolarov continually unable to offer himself as a reliable outlet, Navas became the primary short outlet option – with Negredo, obviously the long outlet option.

It didn’t take long to realize that as Kolarov’s value in the initial build-up decreased, Navas’ increased. And so Alba sat deeper, afraid to move forward, lest it open space for Navas to move into. Incredibly, it was Alba who led all players in interceptions, making a rather ridiculous seven of them, six of which came from the left side of defence.

For all that Pellegrini got wrong tactically, I actually thought City were rather good for large stretches, including several strong individual performances. While he may have handled Alves’ goal better than he did, Hart commanded his area well, claiming or punching everything he came off his line for; Kompany was a rock in defence, once dispossessing Messi in a manner that made my jaw drop; Silva was beyond good, both controlling City’s play while also regularly assuming the role of catalyst for the forward moves (if only he had managed to score with his late attempt – a moment which showed just how good Valdes actually is); while Fernandinho again showed he, even more than Aguero, is the most important player to Pellegrini’s City.

Back to Silva for a moment; City’s Merlin truly was magical tonight. Eyes in the back of his head, continually finding the right pass, either switching play to an opposite side or rolling the perfect through ball into the path of a runner. He was so good as a #10, it’s not hard to argue that City (when healthy) might be better off playing a 4-2-3-1 with Silva behind the striker, flanked by Nasri on the left and Navas on the right while supported by Fernandinho and Yaya. We’ll likely never see that, but I think it might the best way to fuse attack with defence.

What’s next, then? Barring a setback, Aguero will be available for the away leg at the Nou Camp, and with City now needing at least a two goal margin of victory it won’t be a moment too soon. And there exists the possibility that City have discovered a useful way to attack the Catalans; once down to ten, City were forced to play quite narrow, as Nasri joined the midfield at the expense of Navas and Kolarov made way for Lescott.

And at least the next time, Pellegrini won’t have the option to field two left-backs.