Having seen his side thoroughly beaten a fortnight ago, Pellegrini welcomed two players back from injury by making six changes to the starting XI. The result? A complete and total performance that sees City advance in the F.A. Cup while flying high into Tuesday's much anticipated Champions League match with Barcelona.

In an effort to show just how close these sides are, let’s take a quick look at aggregate numbers and results. City and Chelsea have played three times this season: October 27th (Chelsea 2 – 1 City), February 3rd (City 0 – 1 Chelsea) and February 15th (City 2 – Chelsea 0). Six goals scored, six goals conceded; both sides scoring and conceding three apiece, with two away goals scored, also perfectly halved with one by each side. Once it was Mourinho who out-thought Pellegrini (in a match that increasingly looks as if it were influenced more by injuries than by tactics), once it was Pellegrini who out-thought Mourinho, and once the absurdity that was the Hart-Nastasić error occurred.

Barring a Champions League encounter in later rounds, City and Chelsea have met for the final time this season and although Chelsea have claimed all six possible league points, I see very little difference in the quality of each side – something that should make the race for the Premier League all the better.

About that Cup win then. Amazing to think that the same front four that I (and many others) praised just 12 days ago, was entirely inefficient and ineffective once Lescott (currently in better form than Nastasić), Clichy (a better defensive fullback than Kolarov) and Javi García (infinitely better than Demichelis in midfield) returned to the starting lineup. With García patrolling the midfield, Willian no longer ran unmarked in the center of midfield, while Milner’s presence above Zabaleta meant that Hazard no longer had the time or space to dribble across the face of the front four, and Eto’o was so useless that he was replaced at halftime by Chelsea’s newest addition (a winger, no less), Mohamed Salah.

While the forward strike force of Negredo and Džeko were so isolated and cutoff from the rest of the midfield in the league match, Jovetić’s appearance this time around meant the forward pairing found the appropriate link between midfield and attack, as the Montenegrin plays so well between the lines. García’s presence also ensured that City’s previously horrendous transition defending was rather sorted, with City rarely being troubled by Chelsea’s counter attacks.

Indeed, as the numbers indicate (below, from WhoScored.com) and as Mourinho himself admitted, City were, by a distance, the better side.

Interestingly, Pellegrini addressed the notion that he was previously second best to Mourinho in a tactical sense, saying "It's easy to talk about tactics when you win. I repeat, I don't think we had [a] tactics issue against Chelsea before." Whether you believe him or you don’t (and too be honest, I don’t), it’s certainly an intriguing possibility. Injuries aside, I think Pellegrini made a couple of poor personnel decisions in the previous match, most specifically,  choosing Nastasić and Kolarov at the expense of Lescott and Clichy and pairing Negredo with Džeko, a combination that simply doesn’t work.

Was it then as Pellegrini implied, strictly a matter of better personnel? If players influence tactics, it isn’t hard to see a shift in tactics between the two most recent matches: Milner protected Zabaleta better than Navas did previously, García offered more in midfield than Demichelis, while the Lescott-Clichy pairing shored up the left side of defence. And on the other side, it’s certainly not hard to argue that Terry’s absence in the Chelsea defence was noticeable, as the English centre-back is positionally astute and is an excellent organizer of a back line; two things that David Luiz is definitively not.

Another noticeable – and important – difference was Kompany’s positioning. As the below image shows, García’s presence in midfield affords Kompany the opportunities to step forward from the back line to track runners or to make tackles. Here, he stepped all the way into Chelsea’s half in an effort to dispossess Willian, a tackle he successfully made, allowing him to advance even further and play a diagonal towards Jovetić. While a seemingly small change, Kompany was far too hesitant to step up in that same way in the match prior, allowing Willian to receive the ball in similar positions, but this time turning towards, and eventually running at, the City defence.

García’s presence didn’t just influence Kompany’s positioning and risk-taking, as it also allowed Yaya to stay higher up the pitch, an allowance he used (often assisted by Jovetić)  to pressure Matić – a player who had been influential in the previous match. And as Matić was consistently marked deep, it forced a large amount of the initial phase of play to start through Mikel, a player who isn’t in the same class as the Serbian. 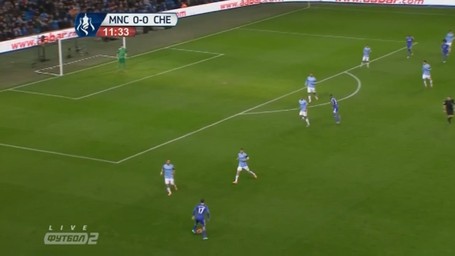 As mentioned before, Milner’s inclusion on the right meant a more fluid partnership with Zabaleta than was previously seen  with Navas. Offensively, Milner’s end goal isn’t just to beat his man and put in a cross, allowing Zabaleta more space on the overlap to reach the byline and cross towards the middle. While defensively, it meant a more responsible partnership with Milner always available to protect his fullback by tracking a runner. It often meant that Hazard was marked by two defenders when he found himself in possession on City's right, and if he moved inside one of the two would run with him, effectively ushering him towards either Kompany or Garcia; an element City clearly lacked a couple of weeks ago.

Lastly, Jovetić’s involvement was instrumental going forward: he, like Aguero is willing and able to drop deeper in an effort to link the play between the midfield and attack. An action that means a less isolated forward pair and a less exposed midfield – both of which are crucial components to playing well in a 4-4-2.