Share All sharing options for: Manchester City v Barcelona: A Tactical Look Ahead

On 18 February, Manchester City will host Spanish champions FC Barcelona at the Etihad Stadium in the first-round of their Champions League Round-of-16 tie.

Manuel Pellegrini will be without Sergio Aguero while Fernandinho's participation seems "difficult" at present. Samir Nasri is available after a lengthy absence, but is unlikely to start such a high intensity game. Javi Garcia is expected to be match-fit. 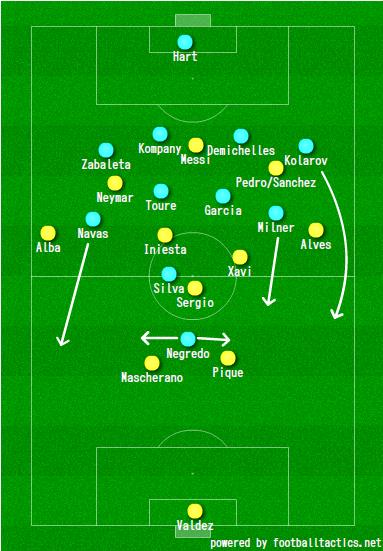 It's very hard to predict the line-up for the game considering City's injury list.

Nonetheless, I believe a back-four of Vincent Kompany, Martin Demichelles, Pablo Zabaleta and Aleksandar Kolarov will start. Kompany and Zabaleta are shoe-in's. Demichelles will bring in European pedigree and experience and Kolarov's threat from out wide against a narrow Barcelona side could be crucial.

In midfield, Yaya Toure will start. If Fernandinho is available, the Brazilian will partner the Ivorian, if not, Javi Garcia, who has improved drastically under Pellegrini, should come into the starting XI.

To replace Fernandinho, Pellegrini will require a player who can break up Barcelona's plays and protect the back-four. Fernandinho averages 4.3 tackles and 2.3 interceptions per-game- highlighting the major role he plays in protecting Kompany and Co. His performances in January even led to City naming him their "unsung player of the month".

For now, Garcia is the best of the lot available to cover for Fernandinho.

Some have suggested starting Kompany in midfield (by trade, a defensive midfielder). But that will mean a massive reshuffle across the midfield and defense for City and increase the risk of a Chelsea-esque catastrophe when Demichelles was slotted alongside Toure after Fernandinho was ruled out. Garcia is used to playing with Toure and David Silva and their movements. He can pass the ball well and provide defensive shield.

Moving on, Jesus Navas should start on the right-wing. On the left, I see James Milner, with David Silva playing in the hole behind Alvaro Negredo.

When facing strong opponents where focus is on ball retention, Pellegrini has often chosen a midfielder to play behind the striker. He did that a lot in La Liga with Villarreal, especially when the "Yellow Submarine" faced Barcelona.

"The few times we have buried our system, we normally have a centre forward and an attacking midfielder...It hasn't happened often but against Barcelona yes, because they have majority of the possession...," he once said.

Moreover, after seeing his two midfielders get overrun against Chelsea (and versus Bayern a few months earlier), I feel Pellegrini will be a bit reactive and cautious by playing Silva against the team averaging highest possession in the Champions League.

When City faced Bayer Munich at the Etihad, their mini comeback commenced after Silva came on midway through the second-half and City got three men in midfield. He watched Phillip Lahm closely and produced ball-playing abilities from in between the lines.

In the away game, City 3-2 won. Silva started as the third and most attacking midfielder. Pellegrini understood his error of playing with two strikers against a possession-minded team. And his change paid dividends with Silva scoring once and completing 95 percent of his passes.

Against Barcelona, Silva's ball retention abilities will help the Sky Blues use possession more effectively. Unlike Aguero and Negredo, Silva can drop in between the lines, collect the ball in congested spaces and sprinkle passes all over the pitch. If Negredo plays behind Dzeko, he will simply look to make runs behind the defense and will be more wasteful with the ball.

Out of possession, Silva will have an important role to play as well.

When Bayern thrashed Barcelona last season, they laid emphasis on pressing Sergio Busquets- something Pellegrini will want Silva to do. Silva could continually drop onto Busquets and prevent him from orchestrating from the deep. This will make it difficult for Barcelona to transfer possession from the midfield third into the attacking third.

Moreover, with Milner coming infield, he and Silva can create overloads against Busquets in between the lines. Nasri and Silva often made it 2-versus-1 against Lucas Leiva when City hosted Liverpool, causing insurmountable troubles for the Reds.

Milner is likely to be given a surprise start because of his stamina and defensive discipline. His work ethics will be crucial in keeping Dani Alves' runs in check and in making runs behind the Brazil international when City break forward.

With Malaga, Pellegrini almost took the club to the semi-final by playing with one striker, supported by an attacking midfielder. To stay on the safer side, he should do the same with City against Barcelona.

Barcelona to Dominate, City Sit Back

Barcelona will dominate possession- there's no doubt about that.

Pellegrini won't want his team to press high up the pitch and instead he will want them to sit back and close down spaces for the likes of Lionel Messi and Neymar. Closing the gaps and passing lines through the centre will be more important versus Barcelona, than pressing them high up the pitch.

Silva and Negredo will try to prevent the Catalans' back-four and Busquets from playing the back, but when Barcelona will enter City's half, the latter will put up two organized banks of four.

Congesting the midfield will prevent Barcelona from playing in the area they are most dangerous- "the red zone", that is, "the central area just outside the D from which most shots or decisive passes come".

Navas and Milner could be seen often drifting in to congest the middle of the park. City will try to force Barcelona out wide. Moreover, the two wingers will also be required keep the runs of Jordi Alba and Alves respectively, in check.

The discipline and stamina of the two wingers will be very important. They'll need to know when to come infield and then quickly shuttle wide when their opposing full-back marauds forward.

City on the Counter

If City hand Barcelona the ball and the latter push high up the field, the Citizens will have the chance to catch their opponents on the break.

Alves and Alba will be continually caught high up the pitch, while Busquets' lack of mobility can be exploited by City's attackers.

The pace of Navas, tireless running of Milner, Silva's penetrative passing, Negredo's movements and strength and Kolarov's crosses- these traits when mixed against a team as defensively susceptible to the counter-attacks as Barcelona, can reap in several goals. Yes, several.

As Jan Molby of EuroSports argues, "Barca will have plenty of possession, but City can punish them when they get on the ball".

Guillem Balague feels the same: "In City they (Barcelona) will come up against the type of side they most hate to play—one that defends deep before killing you with lethal counter-attacks packed with pace and quality, as effective as anything you’ll find anywhere in the world".

Here's a virtual world example of how Pellegrini will want City to play.

City have scored 14 goals from set-pieces and apart from Pique and Busquets, Barcelona won't have a player who can provide adequate aerial presence at corners and free-kicks. This is where the height and strength of the likes of Toure, Garcia, Kompany and Demichelles can be utilized.

Pellegrini should focus heavily on set-pieces in training to the build-up to the match, like Celtic did two years back.