City vs Barcelona: A Tactical Preview

Counter attacks, transition defending, a lack of balance, attacking fullbacks, individual errors, and inverted wingers. It’s Barcelona and Manchester City and it’s happening at an Etihad near you.

Share All sharing options for: City vs Barcelona: A Tactical Preview

And so it's come: Barcelona, the mighty Spanish giant with the four time Ballon D'Or winner are set to invade the Etihad, in a match that old-time City fans must still believe to be an impossible dream. 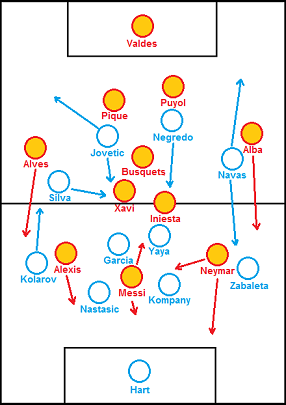 Pellegrini still appears to be significantly hampered by injuries, with Fernandinho and Aguero likely facing 11th hour fitness tests, while Javi Garcia and Nasri should be available. With Aguero out, I hope that Pellegrini pairs Negredo with Jovetic up top or reverts to a 4-2-3-1 (honestly, any option that isn’t Negredo and Dzeko will do nicely). I think it’s wise to assume a 4-4-2, with Pellegrini hoping to outscore Barcelona in the first leg and hang on in the return trip to the Nou Camp. Assuming only Garcia is fit *crosses fingers for Fernandinho*, Pellegrini appears to have three choices: Jovetic/Dzeko, Kolarov/Clichy, or Nastasic/Demichelis (my preferences are the first of each pairing).

While these starting lineups involve a bit of guesswork, obviously dependent on injury returns, fitness tests and tactical preference, the most mystery certainly seems to revolve around Pellegrini’s formation. Barcelona will undoubtedly play in a 4-3-3 with Messi in his usual role, with one of Alexis or Pedro to his right. Who Tata chooses on the left wing will signal his intentions and preferences: if Neymar is fit and started, Tata will be willing to sacrifice possession for trickery and pace. If he chooses to play one of Iniesta or Fabregas, it will be in an attempt to control the game and slow it down, in an attempt to keep the ball better. If Tata opts for Neymar it means choosing between Xavi and Cesc; a decision that’s almost impossible to predict. Defensively, the only choice seems to be whether to pair Pique with Puyol or Mascherano.

One of Tata's great achievements at Barcelona has been his bold insistence on change, both tactically and practically. He's been unafraid to rest key players at key moments; earlier this week, in an incredibly important away match against Sevilla, Tata selected Alex Song at the expense of Busquets -- and anyone who's seen those two play understands the gulf in class that separates them. But perhaps better still (and most certainly more useful to this analysis) was his team selection in the second leg of their semi-final tie against Real Sociedad, in which Tata opted for Fabregas on the left wing rather than an actual winger. It's hard to see it as anything other than a test run for a possible lineup against City that would allow the visitors to keep possession better than they otherwise would.

Barcelona appear to be boosted by the return of Neymar who, as mentioned earlier, would likely start the match in his customary role on the left wing. Interestingly, the left side of both teams will in likelihood be occupied by inverted types – in a tactical and positional sense, not dominant foot – with all of Neymar, Iniesta, Cesc, and Silva all moving inward at some point in the attack.

Ideally, the fullback playing behind the inverted winger (in City’s case this will be either Kolarov or Clichy, while for Barcelona it will be one of Alba or Adriano) is asked to provide width and height in attack. This makes a good deal of sense: when the player from the flank moves inside, that vacated space needs to be filled and the most logical player to fill it would be the fullback on that side.

This principle leads us to what I believe to be one of City’s primary flaws: a lack of appropriate balance from the fullbacks. Kolarov’s form under Pellegrini slightly complicates matters, but City’s best attacking fullback (and all-around fullback for that matter), is Zabaleta. While perhaps not as dynamic as Kolarov, Zabaleta is the better crosser of the ball and is better in a tactical sense (i.e. reading the play, sensing positional shifts and anticipating player movement).

The problem of course, is that Zabaleta plays on City’s right – coincidentally, the side of the field with a traditional winger. When Txiki identified, and later bought, Navas in the summer, he did so in an effort to bring more width to the City attack. And this is exactly what Navas brings: he’s a player who likes to beat his man to the byline and put in a cross. The chart below (via Squawka.com) shows the area of the pitch where Navas' chance creation have come from.

Granted, the chart doesn't show anything that we didn't really know; namely, that Navas likes to move to the byline and put in crosses. But it's the percentages that I find especially meaninful: almost 70% of the time, Navas creates a chance in the opposition's left corner, an area, that against Barca, should be readily available.

Back to the previous point: what does this mean for Zabaleta? That there is no vacated space for him to move into: he's forced instead to move inside Navas, in what's called an underlap, something that consistently results in his being too far out of position to be useful in City’s defensive transition. The most obvious solution would be a tactical shift that sees Zabaleta stay deeper and tucking inside around the halfway line in order to form a two man shield in transition defence, eventually moving back out to the right as needed.

Interestingly, Barca rather shares the same problem as City. While boasting two of the best attacking fullbacks in the world, Barcelona is often caught in possession with both Alves and Alba too high up the pitch, effectively forcing Busquets to cover either (and thus, both) of the wings. When a team that plays with a high possession rate (City and Barca, in this case), it’s crucial to be able to force the opposition into a specific pass after possession has been lost; but when the only three players behind the ball are the holding midfielder and the two central defenders, that’s a nearly impossible task.

Transition defence, while an underrated aspect of a team’s performance, is often one of the most important, and in this tie just might prove the difference. After all I’ve written, it should come as no surprise that I expect Jesus Navas and one of Alexis, Pedro or Neymar to be two of the most important players across the two legs.

Navas will be specifically asked to attack the vacated space that Jordi Alba will leave behind him as he advances up the pitch to provide a wide outlet to Barca’s attack. (If you’ll indulge me a tangent, I’m embarrassed to admit just how giddy I get thinking about the possibility of watching Navas and Alba in a foot race as both players rank among the fastest in world football.) As for City’s left fullback, Clichy or Kolarov, the danger of being caught too high up the pitch could prove lethal, as Barcelona have already scored eight counter-attack goals this season (for reference, City have scored just three).

Transition defence is about forcing the opposition into passes and movement that properly allows you, as a team, to find the defensive shape before the opposition has the chance to move the ball into a dangerous position. Consider Chelsea's goal from the match last week:

Once again, worth noting just how broken City's defensive shape was in the build-up to Ivanovic's goal pic.twitter.com/kGgQlBOWhs

As Ben has made obvious, the space between Ivanovic and Kolarov is entirely unoccupied, a massive failure on the part of City's defensive transition. Silva, as he is often wont to do, has drifted all the way to the right side of the field making it impossible for him to track Chelsea's right back. Demichelis, who is actually the City player at the bottom of the picture, has completely misunderstood his role in the transition: namely, to provide defensive width to the winger who has taken himself out of position during an offensive phase of play.

Many, myself included, have noted that this goal never occurs if two things happen: (1) Fernandinho is healthy and (2) Milner had played on the left. The first is obvious: Fernandinho has better positionally awareness as a midfielder and a far better skill set to alter this phase of play. The second, is also rather obvious I suppose, in that Milner would never drift to the opposite side of the field and would have, without question, tracked Ivanovic back to the eighteen yard box. But beyond that, where are the strikers? Neither Dzeko or Negredo made themselves available and so too has Yaya abandoned the defensive transition.

I’d like to take a moment here – maybe you could go grab a second cup of tea – and have you congratulate me, because as it turned out, I’ve managed more than 1400 words before I first mentioned Messi in a Barcelona preview. Yes, it is quite the accomplishment, thank you. Right, moving on.

While he might wear the #10 shirt, Messi’s position and role since being made the focal point of the Barcelona attack has (as everyone likes to talk about) is best described as a false nine, or deep lying striker. He occupies the middle of the pitch and is often the furthest player forward, but he doesn’t play as a typical striker and hopefully he never does. 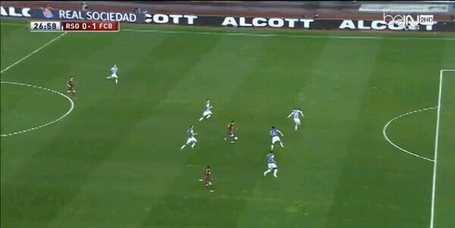 He’s at his best on the ball with room to run at the defence, which means the best way to keep him quiet is to deny him the space (and perhaps more importantly, the ball) where he likes to begin his runs. Easier said than done obviously, but it’s one of the key components to limiting the Barcelona attack. The other option, is to defend with a deep and organized defensive block, which Pellegrini won’t do and doesn’t have the personnel required regardless. But to be perfectly honest, there is no tactical solution to stopping Messi -- the picture above shows you just how impossible it is to stop Messi, because what appears to be an almost perfect defensive shape, the little Argentine manages to score just moments after this image was taken.

Since Tata’s arrival at Barcelona, there’s been a concentrated effort to keep Messi away from the opposing centre-backs for as long as possible. That’s happened primarily in two ways: by dropping Messi deeper into an actual #10 role where his first instinct is to create rather than to score, or by moving him off-center towards the wings. The temptation defensively, will be for Zabaleta to shift inside alongside the right centre-back, in an effort to keep Messi from rounding Kompany. But in truth, this is often what becomes so incredibly problematic, as that inside movement creates enough space in and around the box for two players (the left winger and left fullback) to move into.

More than anything else, this game will be decided by two things: the fullbacks and the defensive transition. The side that plays with the better balance and consistent transitions will almost certainly see a positive result.