News of no great import, really.

Abdisalam Ibrahim, a minor fringe player at Manchester City was released from his contract earlier today. The 22 year old utility player had been out on loan for the past two seasons with NEC in Holland and with Strømsgodset in the Norwegian Tippeligaen.

BBC has the story here 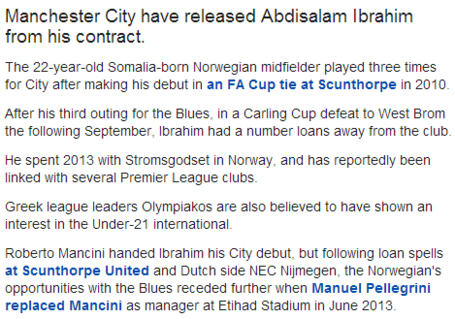 Ibrahim was never likely to in contention for full time minutes at the heart of the Man City midfield but his release, and the timing of that release, are curious. Ibrahim had reportedly been attracting the attention of clubs in France, lower tier PL clubs and Olympiakos of Greece, so it must be assumed that the players release points to the fact that a fee was not likely to be secured for the player.

The best option then becomes the release of the player, which then allows him to negotiate freely with any interested clubs.

Good luck, Abdi. 'Tis a mere bump in the road is all.