City 4 - 2 Cardiff: A workmanlike performance, and how City move forward without Nasri

In a match that looked more like "business as usual" and less like "high-flying, goal scoring City," Fortress Etihad once again saw its home side score four – incidentally, the exact average for home matches this season.

Share All sharing options for: City 4 - 2 Cardiff: A workmanlike performance, and how City move forward without Nasri

In the first league game without Samir Nasri, Pellegrini opted to play Navas on the right while resting Fernandinho, who was replaced by Yaya Toure. As a result, the midfield experienced the same type of balance that Pellegrini had previously spoken of when he paired Fernandinho with Javi Garcia.

While much has changed in Cardiff’s dressing room (a new manager and with him what could become an influx of Norwegian players) very little changed in their approach and formation as when they recorded their most impressive Premier League result to date, the 3-2 home victory they managed in City’s disastrous away day in Wales.

Ole Gunnar Solskjaer opted for a 4-3-3 that really played like a 4-5-1 with Frazier Campbell all but alone on island at the top of their formation. And while Craig Noone was an unused substitute in the previous match between these sides, he was on this occasion, often the best player on the pitch, getting all three of his attempted shots on target, scoring a quite sensational goal that pulled Cardiff level in the 33rd minute, while managing a Messi-esque 8/10 successful take-ons.

Pellegrini’s 4-4-2 has been so successful in part because of its symmetry: in front of the two "deeper" midfielders, have often sat two prototypical interiores, Silva and Nasri. It’s a formation that essentially allows the manager freedom to field two #10s, as both players move inward, allowing space on the wings for the fullbacks to move forward into and the strikers to drift outwards into. The passing triangles are always similar, regardless of which side of the pitch they are played in. On the right, it’s any combination of Kompany, Zabaleta, Yaya, Fernandinho, Nasri and whatever striker has drifted right, while on the left, it’s any combination of Demichelis (or Nastasic or Lescott), Kolarov (or Clichy), Yaya, Fernandinho, Silva and whatever striker has drifted towards the left. 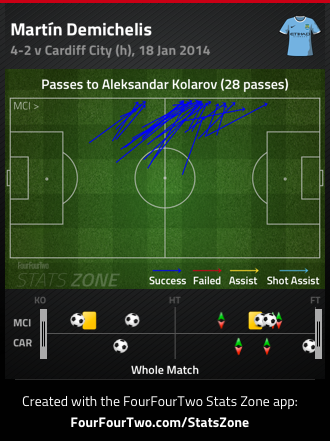 This symmetry matters because it allows City’s buildup play to begin from either side of the pitch, thus preventing the opposition from pressing one specific player or one specific side of the field.  Against Cardiff however, we lacked that symmetry due to Nasri’s absence. Jesus Navas, for all his strengths, is not the type of player you build your play from; he’s an accent to an attack, a player who joins the attacking movement somewhere in the middle. And so it’s no surprise really, that City’s play began not on equal sides, but rather predominantly from the left.

To the right is the passing chart of Demichelis to Kolarov, the players who, in that order, linked up more for City than any other pairing (and by quite a large margin, as their 28 combinations were 10 more than Toure to Silva and Silva to Toure combined for). From Demichelis to Kolarov, the play can quickly find Silva, who is so often the catalyst of City's offensive attacks.

It’s not surprising by any stretch, but it does perhaps signal a sans-Nasri approach for City going forward. When keeping possession at the 57% rate that City are averaging this campaign, passing out from the back is obviously important – and as long as Fernandinho and Yaya continue their absurd form, City’s opposition will continue to force City’s initial play out to the flanks, making the fullbacks even more important than they already were.

Returning momentarily to the Kolarov/Demichelis connection, it's startling how different their communication looks depending on whether or not City have the ball. In possession, they make a formidable tandem as has been discussed. When in defence however, the two could not look more confused. As Kolarov is often in the opponent's half, you would expect the centre-back on his side of the field (in this case Demichelis) to be more conservative, both positionally and in his style of play. This though, is exactly the opposite of what happens when Kolarov and Demichelis are paired together, where the latter is continually pushing to high in attempts to win the ball or deny possession while the former is even further up the pitch having joined the attacking phase of play. It's certainly something to be concerned about when a player of Craig Noone's ability can continually make an impact from the right side of midfield. 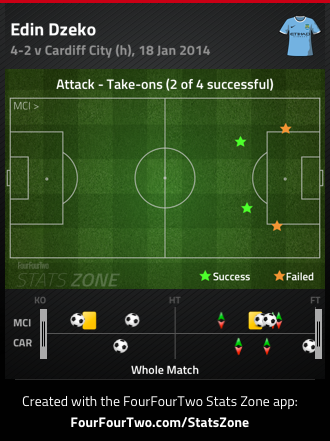 In an interesting contrast to the Blackburn match in mid-week (an analysis of which can be found here), Dzeko – not Negredo – was the striker who continually dropped deep to join the midfield and hold the ball. And while many are lauding the Bosnian for his goal-scoring form (and deservedly so), this new development highlights just how much City have missed Aguero. While quite good at dropping for the ball and holding it while waiting for his teammates to join the attack, Dzeko lacks the ability to turn with the ball and dribble at the opposition – a trait that Aguero not only possesses but often uses to City’s advantage.

Without the ability to turn and dribble, Dzeko’s dropping becomes a rather one-dimensional action, allowing the opposition time to move into position as they hardly worry about Dzeko’s dribbling. The action has a bit of monotony associated to it: Dzeko drops, he receives the pass, holds the ball, turns, passes and runs back towards the box. With Aguero, this dropping action is so much more influential as he has any and every available option once he receives the ball in that deeper position. And while it may sound harsh, my intention is really only to highlight what will be a useful component to City’s attack once Aguero returns to the starting XI.

Onward then, to Jovetic's newest injury top-shelf performance in the second leg against West Ham!