It's an odd thing to review a match where Manchester City scored 4 goals, and think that we should have done better. That's how good the attacking play has been this season. Here are my thoughts, in no particular order.

1. We missed Nasri. David Silva is amazing, but he can only be on one flank at a time. Jesus Navas is a brilliant player, and brings something new to the table, something that had been missing from this team. That said, his attacking movement wasn't quite what was needed for this match. We needed Nasri to link up play between Yaya, Zabaleta, and Dzeko/Negredo. Silva spent most of his time linking play on the left side, between Kolarov, Demichelis, and Dzeko/Negredo. It was too much to ask him to do the same on the other side. Here is his heat map from the match. 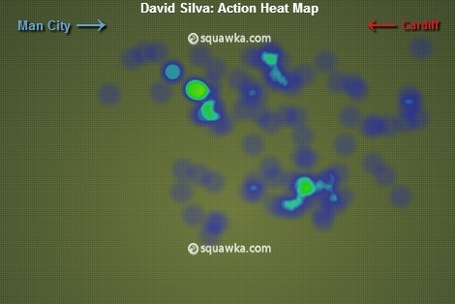 To me, that's a man who is trying to be in two places at once. He did a ton of work on the left flank, but was needed on the right to make that side work better. I think that we are going to really miss Samir Nasri when we come up against a tough side (away at Tottenham, home to Chelsea).

2. Dzeko is flourishing under Pellegrini. It's tough to remember now, but once upon a time, Edin Dzeko was probably the best striker in the Bundesliga. He thrived on counterattacking football, where he can pick out pockets of space and receive good crosses/long balls. We saw that on occasion under Mancini, but for the most part, we saw a frustrated Dzeko trying to be part of the intricate passing plays that Silva, Nasri, Tevez, and Aguero would do. He's not that kind of player.

His passing is better, but he's still the weakest passer in the team. Pellegrini has allowed him to play his style of attacking play, where he gets cut backs in the box, or crosses from the wings. When he gets those, he is a different player. Dzeko got one, almost got another, and now has 16 goals in 20 games. He also should have been given at least one, if not two penalties.

3. Sergio Aguero looked rusty, until he looked unbelievably sharp. Sergio didn't look super confident, almost like a friend who shows up late to a party, and missed the hilarious thing that happened earlier. It's hard to become part of an inside joke that you missed. It's also hard to jump back into a team that has been on fire, and get straight back to your peak form. His linkup play was hesitant, and he seemed unsure of where he should be playing. At times he led the line, but kept looking around as if to make sure he was in the right place.

That said, when he got the ball in the box, he had no doubts about what to do with it. A few Zlatan-like fakes, and he found the perfect place to put the ball.

4. Yaya is a beast. Look, I don't want to toot my own horn, but oh well. In a preview piece on here, I predicted that with Fernandinho behind him, Yaya would have more chances to score this season. I predicted 15 goals in the Premier League. Not that my feelings got too hurt, but I was called a crazy person. Well guess what? Yaya has 11 with 16 games to go. Suck it.

5. The Demichelis - Kolarov combo. Demichelis had 78 passes, and I bet that almost half of those were to Kolarov. Unfortunately, I can't pull that data off Squawka right now. Kolarov has really stepped his game up this season. He puts that down to getting more playing time, which undoubtedly helps. He's already started more league games this season than he had the previous two years.

Demichelis seems to have won the starting role from Nastasic. That's a curious move, because with how much Kolarov bombs down the sideline, Demichelis also likes to play further up the pitch. He's a pretty big risk-taker, which hasn't come at a cost yet. It'll be interesting to see how these two will play together in some of our big away fixtures coming up.

All in all a good result, considering that we don't have Nasri, and Aguero is getting up to speed. It goes to show the depth of this team that players can go down, and there isn't a huge drop off in play. Pellegrini has done a great job of keeping everyone fresh and in form, so anyone really can come into the side and be ready to go.

Who do you think was the Man of the Match?