Manchester City slaughtered Blackburn Rovers 5-0 in the FA Cup third round replay at the Etihad Stadium.

Manuel Pellegrini opted to play with two conventional wingers instead of the usual No 10s out wide. Yaya Toure's injury meant Javi Garcia partnered Fernandinho in midfield. The game also saw the return of Micah Richards, who put in an admirable defensive shift.

Rovers started with a 4-5-1 formation (usually 4-1-4-1) and sat deep, attempting to break forward on the counter. 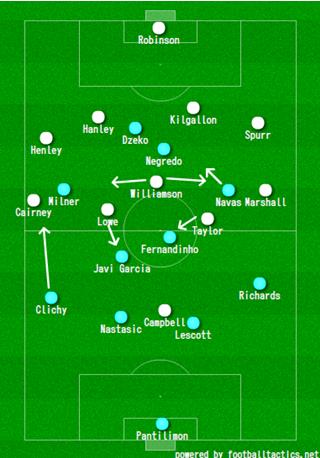 Rovers had a downright extra man in the middle of the park.

Out of possession, Jason Lowe and Chris Taylor closed down Garcia and Fernandinho respectively, allowing the 31-year-old Lee Williamson to monitor the space in front of the defense.

Williamson was never more than two to three yards away from his defenders, making Rovers' formation a 4-1-4-1. Moreover, even though Lowe and Taylor closed down City's midfield pivot aggressively in the hosts' half, as soon as the latter entered the visitors' area, Lowe and Taylor sat back to form a solid bank of midfield five. All this made it increasingly difficult for City to pass through the centre.

"Blackburn played in the first half very well. We didn't find space," Pellegrini commented after the game.

City tried to rectify this error, with Jesus Navas or Alvara Negredo continually dropping in between the lines to provide a passing outlet, but Rovers' extra man advantage meant Williamson was free to close down any player who received a pass in that zone. At times, Fernandinho also took up positions in the final third but Garcia stuttered in playing direct passes to the Brazilian.

Owing to the congestion in midfield, City shifted wide. But Rovers' midfielders worked tirelessly in the first-half, shuffling from the flank-to-flank quickly, doubling up against James Milner and Navas and often forcing City's wingmen to play back-passes. Rovers' full-backs were also very astute on the defensive front in the first-half.

City tried to create passing triangles out wide with Negredo or Edin Dzeko moving to the flanks but Rovers continually broke up their play. In total, Rovers' flank-men made ten tackles against the Citizens.

The problem was City focused too much on the left wing. Instead of providing width on the right, Navas was mainly coming across to the left to help Milner, leading to congestion and denying Gael Clichy the space to overlap.

And Milner was mediocre before the interval. He got into good spaces, but his crossing was poor (just one accurate cross out of seven) and the England international failed to create much.

City Look to Other Options

Fernandinho played a wonderful long ball to Negredo in the 10th minute. Negredo laid it for Dzeko, whose subsequent shot was over the crossbar. But after that, City found it difficult to play accurate long balls.

Garcia and Dzeko tried long shots but were unsuccessful.

City's last option was to play on the counter whenever possible. Ironically, despite dominating possession, the Sky Blues looked most threatening on the break.

In the 36th minute, Navas rounded off a brilliant counter attack by producing a wonderful low delivery across the face of goal, which narrowly evaded two City players.

Ten minutes later, City scored on the counter.  Thomas Spurr was outnumbered by Navas and Ferandinho on City's right wing as Ben Marshall failed to fall back. Navas slid Fernandinho through the half channel and the 28-year-old's cross was met by Negerdo.

Rovers on the Counter-Attack

Rovers tried to play on the counter but their first ball out of defence was frequently poor. Paul Robinson was the culprit here as his distribution was horrendous, producing just one accurate long ball in 45 minutes. Simon Eastwood, who replaced Robinson at half-time played two accurate long balls despite attempting less than half the number of long balls his colleague did.

Rovers enjoyed some periods of possession as well but their final product was lacking. Credit has to be given to City though as their players worked very hard to track back and defend.

Second Half- City Get Joy Down the Wings

Aleksandar Kolarov replaced Fernandinho after the interval. So, the Serbia international took up position on the left wing and Milner moved into midfield alongside Garcia.

Kolarov's brilliant defense-splitting pass in the 47th minute, which Negredo converted into a goal with ease put City in a very commanding position. The second goal also forced Rovers to push high up the pitch and take on their nemesis. This was a disaster for them as the players were running out of steam owing to the industrious first-half and hence, started to leave gaps for City to exploit.

After a brief period of domination for Rovers after the hour mark, when Joshua King came close twice, City went on a rampant down the flanks as Tom Cairney and Marshall were regularly caught high up the pitch.

In the 67th minute, Milner played a diagonal ball to Navas. Rovers were unable to shift to their left quickly enough so Navas was able to maraud down the wing, take on Spurr and produce a cut back for Dzeko's first of the night.

In the 73rd minute, Clichy (untracked) overlapped Kolarov and whipped in a low ball for Dzeko, who assisted Aguero for City's fourth.

Six minutes later, Sergio Aguero and Navas created a 2-versus-1 situation against Spurr. Aguero released Navas who crossed in for Dzeko and the Bosnian easily converted from close range.

Aguero in, Dzeko Out

It took Aguero 45 seconds to register his name on the score-sheet. He also played a crucial role in City's fifth.

This begs the question, does this mean Aguero will replace Dzeko in City's line-up? Probably yes. Dzeko is slightly one dimensional. He struggles when not supplied with continual ammunition.

When the 27-year-old dropped deep against Rovers, Dzeko could do little other than play a simple pass to one of his teammates. Moreover, he got dispossessed thrice.

Here's where Aguero pips his teammate. The Argentine can drop deep, collect the ball, hold it up, run with it and open up spaces in congested areas. Aguero is a more complete striker who fits into Pellegrini's system in a better way.