The usual round up of the weekends Premier League action.

Panic, chaos and overspend. These seem to be three words which most accurately sum up how most clubs operate on deadline day. Smart clubs conclude their transfer business early in the window and tend not to take part in the last gasp dash that was Monday night unless a fantastic opportunity presents itself.

The smart clubs try and bring in new players before the season has even begun in order to bed those players into new environments and new systems. But we know this isn't always possible. Most clubs attempt to buy and sell players until the very last day of the window and this means agents are pushing clubs to sign players, and pushing players to leave clubs. This pushing and touting of players probably causes a lot of upheaval and stress at a time when managers and players should be focusing on the match preparation and tactical issues.

A solution to the problem of agents hawking players, players becoming unsettled and the division of a mangers time and concentration? Shorten the transfer window and move it back to, lets say, August the 10th. The window closes before any league fixture in the major European Countries has taken place. Agents, managers and players can focus their efforts on the transfer window pre-August the 10th and once that deadline has closed everyone can focus all their efforts on playing football games.

We don't need situations like the Bale and Cabaye sit-outs. We need a clean seperation between transfer window and competetive football fixtures. 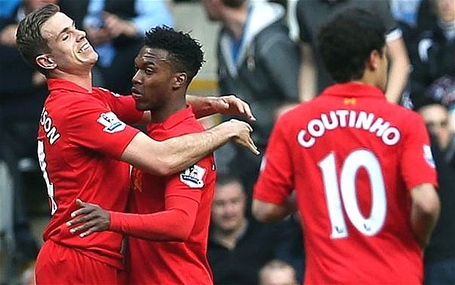 It's been an impressive start to the season for Liverpool. 3 wins, including a win over a pretty toothless Man United team. Liverpool have scored the first goal of the game in each of their first three fixtures and once in the lead have tended to tighten their defensive shape and consolidate their game position.

The real test for Liverpool, their new team and the managers tactical setup will come when Liverpool fall behind in a game. DO they have enoug skill, creativity and no little patience to come from behind in games and a positive result? What of Luis Suarez's return, will he help or will he become a distraction for a team who is building nicely without him?

Fixtures against Swansea, Southampton and Sunderland may not tell us much about Liverpool's ability to overpower above average opposition but these were the types of games Liverpool sometimes struggled in last term.

It's early in the season, like, really early in the season but Fulham have not started well. Three points from three games isn't terrible considering Fulham are a poor away side and their solitary home game was against an Arsenal side who feast on weaker opposition.

There has been a common theme running through each of Fulham's fixtures so far: they are being butchered by the shots count.

SoTR shows Fulham's share of the shots on target.

League average is 50 in each of these categories and it's clear to see that Fulham fall well below that league average number.

A sub-par midfield, an odd corps of specialist strikers and lack of pace throughout the team could cause Fulham to become this seasons Sunderland (a team who struggled mightily in 12/13 by the shots count).

Next up, West Brom at home.

4) Performance Of The Week: Stoke

Mark Hughes won a football match! Yes, that is now two wins from three games and this represents a nice start to what is surely his last chance as a PL manager. Stoke's first win of the season was at home to Crystal Palace who are one of the leagues weaker teams, but Saturday's fixture away at West Ham was a different beast.

West Ham had mighty good home form in 2012/13 and I expect that form to continue into this season too. Sam Allardyce team are difficult to play against, they create good opportunities to score and tend to restrict the opposition from doing likewise. Hence way not many pundits fancied this Stoke team, in transition in terms of manager and playing style,, to go and win away in East London. Not only did Stoke manage to take the three points they did so in impressive fashion.

Stoke outshot West Ham 15-9 and 5-0 in terms of shots on target. Stoke had more possession, more corners and the final third passes were 130-127 in West Ham's favour. These are impressive numbers from a team who were one of the poorest away outfits in the league last year. It's very early in the season to be drawing any conclusions about manager effects or how a team has overhauled it's style but the 2013/14 season has started pretty well for Stoke.

So Paolo Di Canio had another pop at his players after their 3-1 loss away at Crystal Palace. Di Canio was quoted criticizing his captain John O'Shea, calling the players sending off ''absolutely poor and not acceptable''. But the following quote about Connor Whickham is my personal favourite: "After one and a half goals against a League One side he is probably over the moon. There is not the right desire, and I cannot change the heart of my players".

Now, it's one thing criticizing an underperforming senior pro, but I would question just how sensible it is to lay into a 20 yo striker prospect. It's even worse to criticise the performance of your club captain, who in some circumstances, will be your only true ally in a dressing room that is too painfully used to being criticised in public.

We all knew Di Canio would lose his lax control on that temper of his, but nobody thought the public criticism would have begun this soon. Just think for a moment about Di Canio and his charges mental well being after the run of home fixtures.

Di Canio could well and truly out of his mind by the time we get to Xmas.

6) Waste In The Final Third

Within the analytics community a lot of recent work has focused on the final third, namely passing numbers, chance creation and shots (distance, location etc). This of course looks closely at the outcomes, but not so much at how teams arriving in these positions in the first place. This then is what we are looking at with City this season as we try to record the first meaningful (publicly anyway) data.

Although three weeks in is way too early to draw any conclusions there is an area that we perhaps didn't necessarily account for: how much possession and territorial advantage that the final third brings is wasted.

Contrast this to the number of shots taken (City 37 and opposition 14) and it appears that territorial advantage may not be as valuable as thought. Early days of course and this may merely highlight the value of strong defence. One to keep an eye on as we move through the season.

Yaya Toure is a fine footballer, a powerhouse midfielder who roams across the field with authority. One aspect of his game which is not particularly well known is his free kick taking ability. That looks like it may be about to change.

This was Toure's free kick against Hull, his second goal from a set-piece situation in three games.

Paul Carr digs into some of the background:

In his first 3 PL seasons, Yaya Toure had no goals on direct free kicks. He has 2 in 3 games this season.

He (Yaya Toure) had six shots on direct free kicks in the previous three seasons. via @PCarrESPN

Toure's new found prowess as a free kick taker may have been a skill he possessed all along, it was just that Toure was never given a chance to prove it. Previous seasons have seen Tevez, Balotelli, Silva, Milner and Kolarov all on rotation for spot kick duty. Under Mancini, Toure was never an option yet Pellegrini has seen something in Toure that has forced the managers hand.

Toure is unlikely to sustain this excellent free kick conversion rate for the rest of the season but it's mighty nice when a new manager tweaks a system or, in this instance, a free kick taker and having it pay off immediately in terms of goals scored.

Manchester United were an incredibly good set piece team in 2012/13 (link), scoring a league high 26 goals. Now, set-pieces are some parts luck and some parts skill. It's nearly impossible to determine the drivers of the set-piece skill, but it may fair to guess that delivery is a big part of it. Hence why it may be fair to say that a good part of Man United's set-piece prowess last term was due to quality delivery from dead ball situations.

You can see where I am going with this. van Persie was the main driver of that excellent set-piece goals tally in 2012/13, so why on earth is the same player not taking the primary set-piece's for Man United this season?

Now, I have no idea how many free-kick situations Man United have had in the three PL games of 2013/14 but I imagine there have been more than two, which is RvP's free-kick tally this term. How about corners? Man United have been awarded 15 corners in this new season with RvP taking just 4 of them.

So what the hell is going on, why take a player who was, in all likelihood, the driver of Man United's set-piece magic off of set-piece taking duty?

A theory: either van Persie is injured - specifically, a left foot injury - or Moyes doesn't really fancy van Persie as his set-piece taker. Early doors and all, but this is definitely something to keep track off this season.

We've been running this Ten Points recap/reflection/look back for almost a year now, and it has proved one of the popular features on the site. How popular? Take a look around the mainstream media this past week or so:

We have The Guardian, BBC, MEN, The Mirror, Independent and ESPN have all offering up their versions. As far as we know (although we are willing to stand corrected) we were the first to run something along the lines of a 'Ten Points...' piece.