Two second half goals were enough to see off the visitors as City returned to winning ways.

Share All sharing options for: City 2 - 0 Hull: The Tactics

An unfair scoreline or a comfortable win? Some will argue that Hull deserved better while others are adamant that City had the game controlled. I’m somewhere in between but leaning closer to the latter. City certainly controlled possession and dictated tempo, however they dealt with Hull's midfield pressure (especially in the center of the pitch where Livermore and Huddlestone were strangely effective) rather poorly, often losing the ball and having to defend the counter – something that is clearly not this team’s strength.

While the possession stats read a comfortable 58.2%, City’s problem – especially in the first half – was where on the pitch that possession was concentrated. Pass combinations often give a good indicator of where the ball is being played the most and against Hull, the results are telling. The four highest pass combinations were Zabaleta to Navas (20), Lescott to Nastasic (14), Nastasic to Kolarov (13) and Yaya to Lescott (12). These passes – from RB to RW (often a very easy and safe pass), CB to CB (the safest pass in football), CB to LB (the second safest pass in football), and DM to CB (another safe and easy pass) – paint a vivid picture of the game, one that, despite a lack of chances, City relatively controlled. 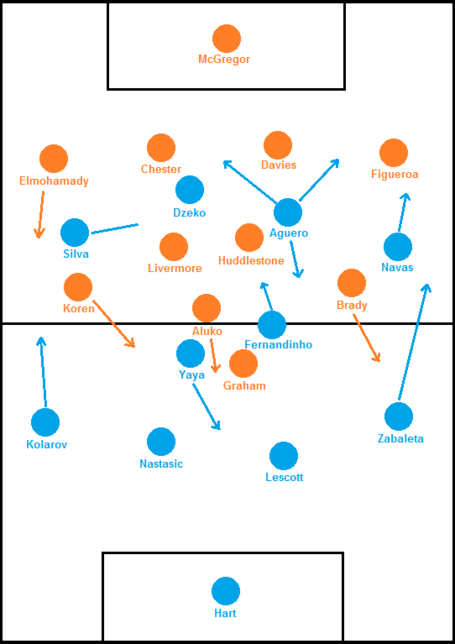 Another week, another bus, as City were again forced to to break down a stubborn and well-structured opponent. Where last week it was Cardiff’s 4-5-1 with Kim dropping deep into midfield to defend, this time it was Aluko, as Hull repeatedly tried to defend with nine and break quickly (which they did effectively – especially twice in the first half that very easily could have seen the home side fall behind by two).

Zabaleta’s return to form was sure to be a welcome relief after the nightmare he endured in Wales a week prior. While sound defensively, it was his contributions going forward that really aided the home team. One of the great myths in football is that good teams shouldn’t have to rely on their fullbacks for offensive support and team width, while in reality nothing could be further from the truth. The modern game has seen the fullback become an integral position, as teams become more and more tactically aware.

Look anywhere in Europe at the best sides in the best leagues and you’ll see in each side, as if a mandatory position, the inverted winger. Bayern Munich have two: with Ribery on the left and Robben on the right; Real Madrid now also have two: Ronaldo on the left and Bale (presumably) on the right; even Barcelona, often overly-reliant on Messi, have added Neymar. In the Premier League, only United have held strong with the traditional winger type (although Ashley Young is technically a right footed player on the left, but he’s a bit shit, and as such is quite unnoticeable).

What does the inverted winger have to do with the fullback? Well, everything. As the inverted winger is positioned on the flank of his weaker foot, it forces (or allows) him to drive inside onto his strong foot allowing him a better position to attack the goal. But as he moves inside, he drags the fullback with him, leaving the outside wing now available for the fullback to move into. As modern tactics evolve and the emphasis on space becomes ever more important, the vacated wing space made available by the inverted winger has become perhaps the most fought after space on the pitch. Teams that cede possession are forced to field lightning fast wingers who can track the opposing fullback but still counter present a threat on the counter, while sides that control the ball have been forced to find fullbacks who can move forward both with pace and skill.

As this has become a bit of a diatribe that ran away from me, I will close with a simply reminder that Negredo scored his brilliant header from a Zabaleta cross that came in from the right flank.

This was the Brazilian’s worst game in a City kit. He was loose with his passes and quite untidy in possession, continually giving the ball away and resorting to cheap fouls. The goal that Graham scored on (only for it to be correctly called back) began with a Hull break resulting from a ridiculously poor pass from Fernandinho to Yaya, leaving the Ivorian in a heap on the ground as the visitors broke at speed – though Yaya too is at fault as he continually tracked back at a slow jog, as if meandering on his Sunday stroll.

I think Pellegrini has a bit of a quandary on his hands with the City midfield as it’s currently constructed: neither Yaya or Fernandinho is inherently a defensive midfielder (although I do think Yaya will grow into the role effectively) and neither really plays well with the other. Fernandinho is a box to box midfielder without much by way of finishing – he’s full of energy and purpose, continually moving up and down the pitch with strength and skill, yet not entirely useful upon reaching the opponent’s box. He doesn’t have the positional sense to sit in holes and properly break up counterattacks and nor does he have any real tactical acumen when trying to become available to receive passes. But that’s not to say he’s not a good player – only that he’s not suited (or perhaps not yet adjusted) to Yaya’s style. And to be fair, it’s a difficult style to adjust to. The Ivorian tends to take up half the pitch when City are in possession, sometimes sitting very deep, sometimes drifting out to the fullbacks, and other times popping up at the edge of the box.

It could simply be a rough adjustment that will eventually sort itself out or it could be an early sign of trouble: either way, I think it might be appropriate to see how Rodwell could do in a strict box-to-box role, with Yaya sitting behind him like they did in last season's loss to Norwich.

The Strength of the Two Striker System (and how it failed City on Saturday):

When using two strikers, the objective is rather straightforward: to occupy the centre-backs and the space around the edge of the box by interacting with each and making cooperative runs. If one striker makes a forward run, the other drifts into the now vacant space left behind. If one drops deep, the other tends to shift laterally to try and drag both centre-backs out of position leaving wide spaces in the empty channels.

Below are representations of one of these striker interactions: Silva is on the ball, cutting inside from the left flank, forcing Elmohamady to step forward to track him. If Dzeko makes a forward run, he drags Chester deep and to the right while Davies also has to take a step back. What results is vacated space and a widening of the Hull’s right channel (the space between fullback and centre-half): 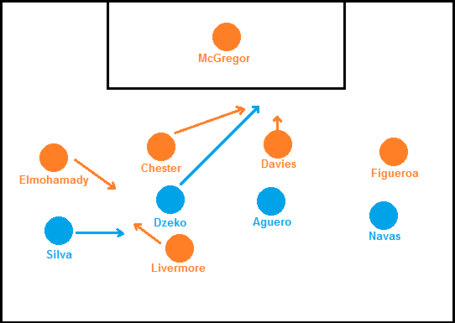 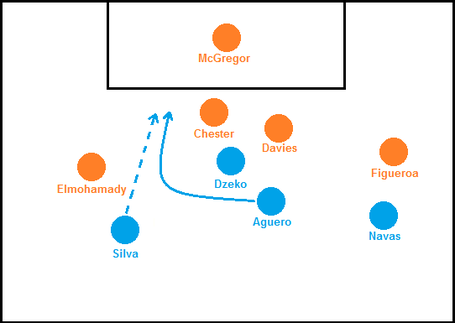 All Aguero has to do now is make a run beneath Dzeko and into that vacated area, which Silva can easily pick out. This is just one example of the type of movement that Dzeko and Aguero constantly combined for in the match against Newcastle that had us in awe.

On Saturday, Dzeko did none of this. He was lazy in his own movement, while also being slow to react to Aguero’s frequent runs and drifting movement, and never established himself in any dangerous positions. In fact, this might be the most anonymous performance he’s ever managed as a Sky Blue. Anyone whose watched Dzeko in England knows he’s prone to these types of matches, yet this one is so puzzling. He’s had Pellegrini’s public backing since the new manager’s arrival and had, in the first two games, showed signs that he’d already matured under the Chilean’s leadership. He was spectacular in every aspect against Newcastle and played quite well against Cardiff despite the loss. I've included Dzeko's heat maps from the Newcastle match and against Hull at the weekend, and to be honest, the difference is startling. 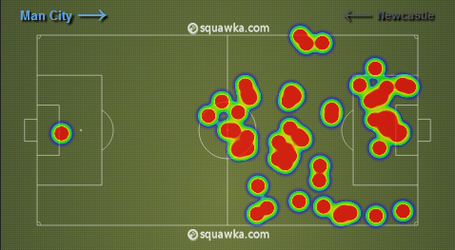 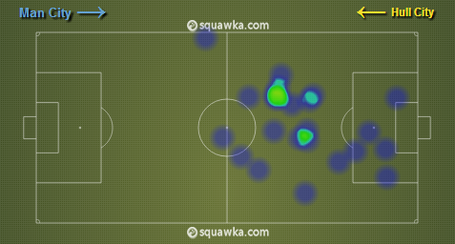 The lad barely ran, which we didn't need these graphs to know (he was anonymous throughout the match) but the confirmation is nice all the same. Why did he look so disinterested throughout against Hull who don’t even possess the types of centre-backs that have typically frustrated him? To be honest, your guess is as good as mine, but I’ll be surprised if he starts against Stoke.

City, while shaky at times, certainly did enough to take all three points. Pellegrini will be thankful of that, yet not thrilled with the performance of some of his players. Lescott continues to look useless without Kompany to command him, Fernandinho looked lost and confused for large portions, and Silva worryingly struggled to stamp his mark on the precedings. Though these problems pale in comparison to Dzeko's performance as the Bosnian looked lazy and uninterested – problems that defined his performances under the previous regime. Still, three points are three points and as the players continue to gel and Pellegrini continues to adapt, this City side will improve – hopefully sooner rather than later.