Share All sharing options for: City 4 – 1 United: The Tactics

A Derby to remember, that. In a match that many expected to be a cagey affair on account of the first time managers, it was instead a comprehensive victory for Pellegrini, who out-thought and out-maneuvered Moyes at every stop. 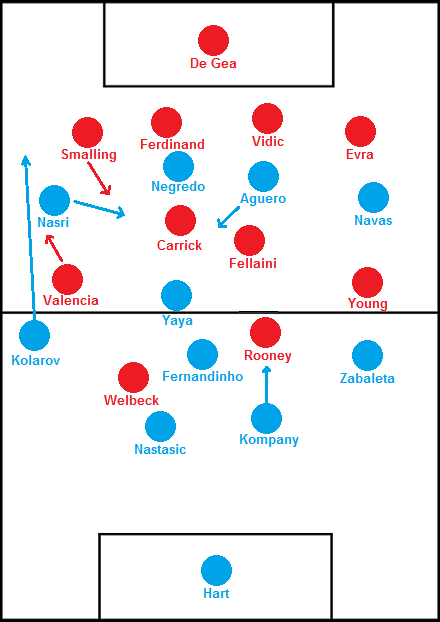 While both managers unsurprisingly opted for the 4-4-2, the two sides functioned quite differently. For City, Nasri’s inclusion on the left meant that City would often keep the ball and move forward in a quasi-4-3-3, as the Frenchman would drift inside to form a midfield three which was anchored by the deep-lying Brazilian. As Navas prefers to stay wide and high, he effectively became a third forward, pinning Evra deep. Rafael’s injury forced Moyes to start Smalling at left-back, a development that must surely have worried Moyes pre-match and perhaps forced him into starting Valencia on the right side of midfield, believing the winger would help significantly in the defensive phase of play. (It was of course, exactly the opposite of this that led to City’s opening goal, as Valencia failed to mark Kolarov as he made his overlapping run outside of Nasri and past a helpless Smalling.)

While City’s 4-4-2 often shifted to a 4-3-3 and a 4-1-3-2, United’s was static. Partly on account of how dominant City were through the opening fifty minutes and partly because of the players Moyes chose, United were left slaves to their numerical formation. Like Evra, who was pinned back by Navas, so too were Valencia and Young pinned deep by Zabaleta and Kolarov; meanwhile in midfield, Carrick and Fellaini were outnumbered three to two as Nasri drifted inward to play one-twos with Yaya, who found defensive stability from Fernandinho.

Difficult to depict in a graph, United’s pressing (or lack thereof) proved the key for City in midfield. Rooney and Welbeck pressed high up the pitch when City had the ball, perhaps believing the team as a whole were moving forward behind them in a team wide effort to press City higher – alas, this was not the case. While United’s two forwards pressed, the rest of the team sat deep, perhaps out of fear that City might expose the space that would be opened up behind or perhaps out of direct instruction from Moyes: whichever the case, the result was a disjointed United team that allowed far too large a gap between their forward line and the midfield pivot. This space only furthered City’s advantage in midfield as they now had one more man than United as well as the proper space to operate in and exploit. And this was Moyes’ first mistake: it was evident in the first twenty minutes that this disjointed press was both occurring and detrimental yet nothing was done to change it – he didn’t instruct Rooney and Welbeck to drop deeper and nor did he force his back line and midfield to press forward. And so City kept on, routinely exposing the space between United’s front line and midfield.

A time for praise, this. Often the subject of (just) criticism and frustration, Samir Nasri has had a strange City career. In form and on his day, the Frenchman is one of the finer creative players in the Premier League. Yet, his day seems to arrive intermittently, seldom providing the consistency that is needed from the instrumental midfield players that top sides rely upon to break opponents down. That said, against United he was simply fabulous. Unafraid on the ball, finding and exploiting any available space, and providing the creativity that City used to cut United open (indeed, it was his piece of trickery that got Kolarov in space and on the ball for the game’s first assist), Nasri was the best player on the pitch. His passing was superb, especially around United’s box where he was routinely looking for the creative pass, probing for that final bit of skill that would find City an opening. His passing chart tells much of the story with only four failed attempts (one being  a clearance deep in City’s half) and another being a final pass through the heart of the United defense. 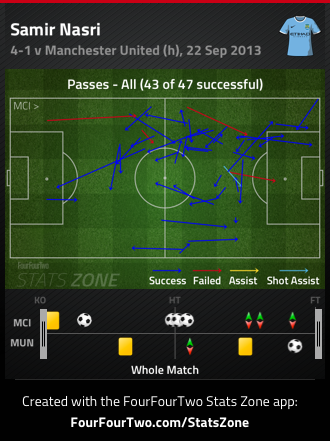 The modern fullback can often be the most important player on the pitch and on Sunday we learned why: Nasri’s continued inward motion exposed Smalling time and again. If Smalling followed him inside he left too much space on the left for City’s fullback (Kolarov) to move into, forcing Valencia to track and defend all the way back to his own byline (significantly hindering United’s counter attacking possibilities). And if Smalling didn’t track him inside, City gained a significant numerical advantage that Moyes didn’t address until Cleverley’s introduction in the 51st minute.

Playing as the second striker, Rooney played deeper than Welbeck and just off to the left – taking up a position that saw him essentially man-marked by Kompany. As City held much of the ball in the first half, United’s opportunities to move forward were on the break, often trying to play an initial long-ball towards Rooney for the striker to hold up play as United’s midfield and fullbacks could move forward. Rooney is typically very good in this role and given time and space to hold the ball, often finds teammates in dangerous positions; and so it was up to Kompany to deny him (a) the ball and (b) space on the ball if he were to get it. And so as United repeatedly pumped the long-balls up towards their star striker, Kompany came high up the pitch (often almost to the center circle) to win the aerial duels with the much shorter Rooney.

Kompany’s forward movement, while effective in limiting Rooney’s hold-up play, opened up immense amount of space in behind, that had United been wiser and more aware, would have made an excellent area to attack. Deep diagonal runs, either from Welbeck (moving from City’s left to right) or from Young (moving from City’s right to left) could have done significant damage to City’s defence as Kompany left Nastasic alone in a deeper position. Why those runs weren’t made and that space wasn’t even explored is a bit of mystery, but United’s failure to even attempt to exploit the dangerous space made available by Kompany’s forward dominance is perhaps Moyes’ most glaring error from his first Manchester Derby.

Seeing his side down 2-nil at the break while having been entirely overrun in midfield, it still, three days on, remains a mystery why Moyes didn’t make a halftime change. Instead, he waited until after City hit for two more and the game was lost to introduce a tactical substitution that shifted the balance away from the home side. Moyes’ only substitution (Young off, Cleverley on) finally allowed United to wrestle the midfield away from the brilliant Yaya Toure and impressively solid Fernandinho. Though difficult to know if this was more a result of United’s change or Pellegrini’s tactical shift that allowed United more of the ball, when Fellaini moved forward into the #10 with Cleverley and Carrick playing beneath him, United developed a rhythm  and a passing game in midfield that made them look more of a threat than previous.

A brilliant display from City, perhaps an even better performance than the 6-1. Pellegrini must be commended for his tactics, refusing to let the grandeur of the moment bother him, allowing his players to play a free-flowing, expansive style, moving forward at will and interchanging formations in an attempt to win the game. While it opened up dangerous possibilities (that admittedly were never exploited), Kompany’s marking of Rooney was masterful, preventing United’s primary threat any chance of dictating affairs. The Fernandinho/Yaya partnership (which has been addressed in previous posts if you’re interested) looks to have found the perfect balance, while Nasri has forced us to concede that Silva perhaps shouldn’t be guaranteed a starting place. Agüero and Negredo were brilliant up front, offering link-up play and forward runs that left Ferdinand and Vidic helpless, while on the flanks, Kolarov again had a smashing match, with Zabaleta reminding us that the right side of defence is shored up with no need for worry. A comprehensive victory that will surely force Moyes to try and win the Derby at Old Trafford, a decision that might only play further into City’s strengths.