Share All sharing options for: City 3 – 0 Plzeň: The Tactics

An impressive Champions League opener, that. An away trip to the Czech Republic just four days after the scoreless draw at the Britannia was always going to be a stern test, but considering City’s previous three European campaigns, the pressure on Tuesday felt immense. Having played Negredo, Jovetic, Milner, Rodwell, and Garcia away to Stoke, Pellegrini had a rather rested starting XI for the match against Plzeň. 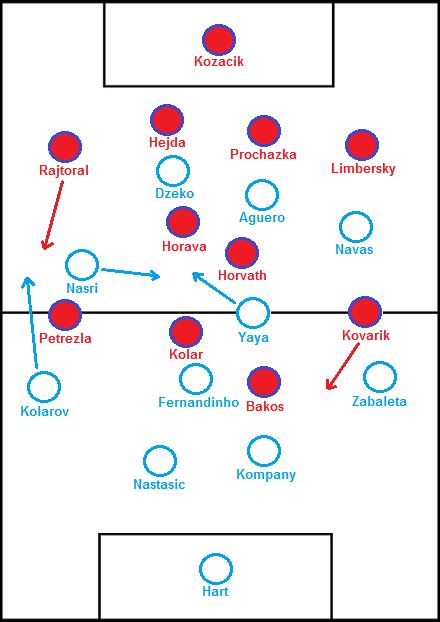 As I have seen only one other Viktoria Plzeň match, I was unsure what to expect from the Czech champions; the 3-nil scoreline, while perhaps a bit unfair on the hosts (after all it was just a fifteen minute stretch directly after halftime that proved their undoing) is more impressive than some are willing to admit. Indeed, Plzeň were wonderful in the first half, defending in a structured and concise 4-4-1-1 and breaking forward in a dangerous 4-2-3-1/4-3-3 that had the visitors scrambling for the first fifteen minutes.

The surprise came not from City’s starting XI – aside from Silva who is unfit, this is surely Pellegrini’s preferred matchday squad – but from the role reversal in midfield. In the previous three games they’ve played together, Fernandinho and Yaya have played with clearly defined roles: Yaya as the deeper, more defensive holder while Fernandinho roams forward. Against Newcastle it worked wonders (although in hindsight that may have more to do with Taylor’s red card than anything else) while against Cardiff and Hull it was met with mixed results. On Tuesday, Pellegrini moved Yaya forward into the more advanced position, having Fernandinho sit behind him and shield the back four. Indeed, Fernandinho moved forward so little that City’s formation played more like a 4-1-3-2 than anything else. Pellegrini’s decision proved pivotal as Yaya was instrumental to City’s attack, forming a great connection with Nasri going forward, constantly playing one-twos as the Frenchman drifted inward. Meanwhile, Fernandinho had a quiet but effective match as he stuck to his defensive assignments, rarely getting caught out and shielding his back four efficiently.

The heat maps of each player show exactly this, with Fernandinho (first) consistently sitting deeper than Yaya (second): 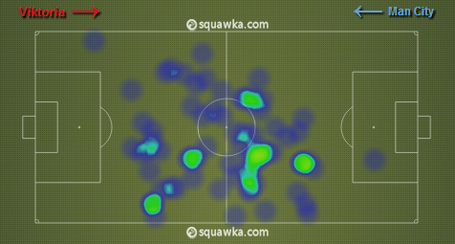 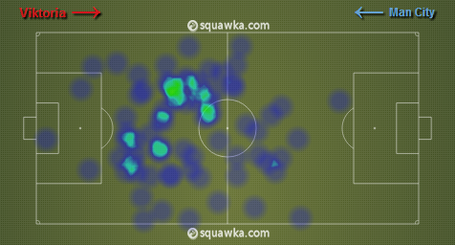 It’s hard to say if it was a one-time gamble that paid off or if it’s a sign of things to come; I think Yaya’s skillset is more suited to the attacking position, while Fernandinho has shown he’s quite capable in either position. Perhaps, Fernandinho’s inflated pricetag played a part in his more advanced role earlier on as it’s difficult to look a 30M player in a holding role. Regardless, the performance against Plzeň will surely force Pellegrini to return to this formation against United at the weekend.

An oft-maligned figure since his arrival, Nasri had a very good match against Plzeň. Unafraid to get on the ball and dribble at the Plzeň defense, he offered an impetus in attack, complemented with an efficient passing game (91%) while staying tidy in possession. City have often struggled with proper spacing and positioning on the left side of attack as Nasri and Silva rarely stick to the wing – but against Plzeň, Nasri spent an important amount of time on the flank, allowing Dzeko and Aguero to drop deeper and link with Yaya without overcrowding the midfield. His action areas and heat map prove this point: 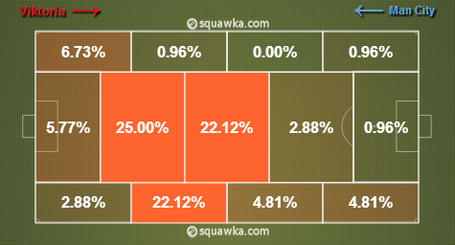 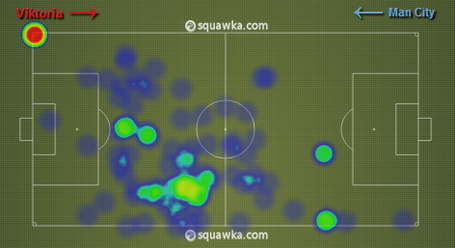 Width for width’s sake is a mistake, but appropriate width (either with an out and out winger like Navas or with a player taking up a position to stretch the midfield area like Nasri) is important, especially in a formation with two strikers that will constantly see the forward players dropping deep. Nasri’s three  dominant areas were taken up at an almost even rate, providing width when necessary and creativity through the middle when it was appropriate. It was an all-together impressive game from the Frenchman, which will surely calm the nerves of those fretting over Silva’s injury.

Hart and the Defense:

Not surpringly, Kompany’s return coincided with the most impressive defensive game of the season. It is only natural that a defense would struggle with the loss of the Club captain and one of three best centre-backs in world football, thus it is also no surprise that his return would again bring the best out of his centre-half pairing (surely this was the best Nastasic has been thus far) while Hart again looked like one of the better keepers in England. Indeed, between this and the Stoke match, England’s #1 has responded brilliantly to the criticism, gaining two impressive clean sheets in the process. The fullbacks too, had good games: Zabaleta was forced to play deeper than he has yet under Pellegrini, but was quite useful in defence, perhaps saving a goal with a brilliant block in the eight yard area while Kolarov had a respectable match, not offering much going forward but effective enough at the back.

While a win against Viktoria Plzeň is little more than expected, City’s new European era got off to a flying start. A trickier game than some would expect, the visitors played well, attacking quicker than in previous weeks while defending confidently with purpose; the midfield was dominant, Nasri was influential, Agüero and Džeko reminded us again of the opening match against Newcastle and faith restored in the defence. Group D is clearly a race between Bayern and City, and winning the dubious away matches against Plzeň and CSKA will ultimately prove vital to progressing for the first time.

More from Bitter and Blue: