Continuing the expectations series with a look at what we can expect from Man City's defensive personnel in 2013/14.

Share All sharing options for: Expectations Part II: The Defense

I don't think I would be over-stretching my argument if I said that Man City's defense was the least culpable area of the squad in failing to retain the Premier League title. Man City's collective defensive corps, injury depleted at times, were still very good, so good that they topped a few of the Premier League's defensive categories last season:

These are some very basic numbers which give us a simple understanding of Man City's defensive performance last year. There really isn't a lot wrong here with the defense, in fact these are really strong numbers.
Now let's look at which defenders featured the most for Man City last season.

This is the defensive corps listed by home/away minutes played. Some of the home or away minutes may be skewed by the timing of injuries or certain fixtures but overall I think we can use this information to say a few things.

This was the way Mancini deployed his defensive options last year. Injuries are obviously a factor here - Richards and Kompany missed time - but I think there are some pretty clear trends here:

Not much to see here. Boyata has seemingly been given a second chance, but he will be 23 years of age this season and it may be time to make a decision on his future. That likely means he will leave the club.

Kolo Toure is the only defender to have left the club having joined Liverpool on a free transfer. Toure was offered a 2 year deal at Liverpool and it's eay to see why he signed that contract at his age. Should Man City have retained the player? Probably, but it's likely that Pellegrini sees Javi Garcia as the #4 center back. God help us! 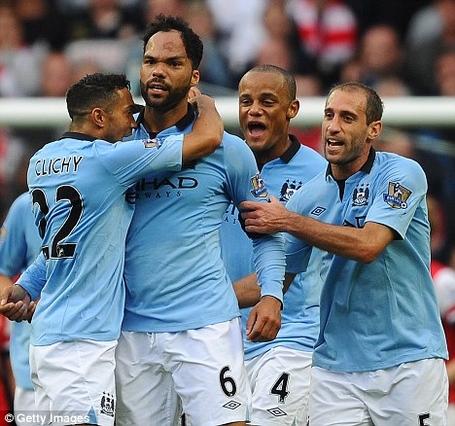 #1 Kompany Undisputed #1 center back for Man City. Quick, tall and an exceptional reader of the game he has few flaws save for the odd lunge or three, which incidentally seem to be fading away from his game. Small muscular injuries may be the only weakness for a player who is entering his prime. Will be played in every game when fit.

#2 Nastasic Just 20 years of age and was trusted last season to play in the difficult away games. He very rarely looked troubled by either the physical game or the quick forward. I am struggling to remember the occasions when he had to make a recovery tackle which points to strong anticipation. We only have one season by which to judge Nastasic but it's easy to see why fans are so excited about not only his potential but his ability to outperform opposition strikers at such a yopung age. Will be the #2 center back, but may be rotated and rested at times.

#3 Lescott 30 years old and has just a year left on his contract. It's difficult to see any kind of long term future for Lescott at City. The player is a hangover from a previous generation of center backs - strong, obdurate and no nonsense. Not the best distributor of the ball, at times looks panicked by pace from opposing strikers. I think he will be replaced in 2014/15 so this year may be the last we see of him in a City shirt. #3 center back but will get some easy home minutes when Nastasic is rested. Likely to start the season next to Kompany after Nastasic's injury.

#4 Javi Garcia Signed as a midfielder and had an underwhelming campaign in 2012/13. If Javi Garcia is to make good on the remaining 3 years of his contract he may have to adapt to a new role as center back. Pace and knowledge of the center back position may be issues but I think if he is played alongside Kompany then he shouldn't experience too much chaos. Fourth choice center back and midfield plug-in player. Could be a Kompany injury fill in due to his right footedness.

#5 Boyata Dedryck is up against it if we are to be honest. A disappointing loan spell in Holland last year may well have meant the end of his City career if Mancini had remained in charge. The new managers arrival represents a new start but Boyata is going to have to show a steep improvement in his play if he is to remain at City and although he is young enough to improve it appears to be a tall task to remain at Man City/ #5 center back may be loaned or sold, or see cup duty if he stays at the club. 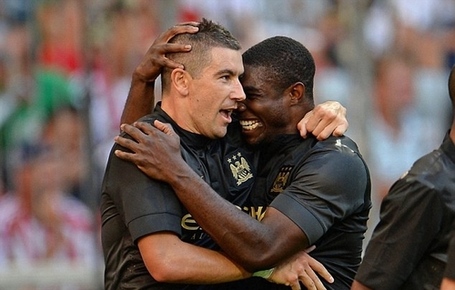 #1 Zabaletta The progress that Zabaletta has made since joining the club in that first mad dash window under Mark Hughes is simply staggering. Zabaletta isn't outstandingly quick or strong, he merely reads the game very well, never gets too tight to his man and can be a very physical opponent to play against. Not the greatest attacking full back but he offers enough going forward to play in a City side who in recent years have demanded their full-backs provide width. Man City's best full-back but with Richards as his deputy he will see some time on the bench. Should see ~60% of minutes in the PL.

#2 Clichy An essential part of City's strongest XI. Clichy has more than covered the bet on his transfer fee. It feels like Arsenal went through the chaos and the growing pains with Clichy and Man City then swooped in and benefitted from that said development. Clichy is a left sided metronome who is better offensively than he is defensively and he will surely play heavy minutes away from home and be rested on occasion at home. A tough choice to place him at #2. Probably has the safest place in the team bar Hart and Kompany. I'd expect ~70% of minutes played if he stays healthy.

#3 Richards This feels like a vital season for Micah and his Man City career. His 2012/13 season was destroyed by injuries and one gets the feeling that Richards may have stagnated somewhat. The upcoming season will likely define who and what Richards is to Man City: a player who can be reasonable expected to split time with Zabaletta or a player who is definitively a back up depth player. We no longer hear the England chatter or the suggestions that he could be a center back option. Needs to show he can be trusted defensively. Will hope to get #405 of PL minutes but may fall short if Zabaletta stays fit.

#4 Kolarov Is Kolarov still here? Lacks the pace and defensive game to be a full-time full back at an elite club. In hindsight it remains difficult to see why Man City and Real Madrid were willing to pay so much money for the player. Injured early in his City career and has never really shown anything that helped us to understand the size of his fee and reputation. Could be his last year in a City shirt. Played 30% of PL minutes in 2012/13 due to some midfield time. Will struggle to play more than that in 2013/14.

Man City's defense has conceded the least goals in the EPL in the last 3 seasons and it's easy to see why: they simply have some very good individual players. Kompany, Zabaletta, Clichy and Nastasic are a fine starting 4, the issues with City - and most clubs, in fact - is the lack of depth. Of Richards, Kolarov, Lescott and Javi Garcia it may be reasonable to expect only Richards, and maybe Garcia, to be at the club in 2014/15.

Will this lack of depth harm Man City? Well, Nastasic is out for the first month of the season and Kompany is prone to the odd muscular injury but in most Premier League fixtures it may be fair to assume that Man City should be able to absorb an injury to anywhere except the left back position. One shudders to think what would happen if Clichy was to suffer a serious injury for that would leave Kolarov exposed to the tough competition and he would probably struggle with such an assignement.

City's back 5 (Hart included) may be as good a unit in the Premier League. Keeping Kompany fit and healthy will be key. Avoiding the chaos that is Kolarov and Garcia would be preferable.