A tactical analysis of Cardiff's incredible and unlikely upset against Manchester City.

Share All sharing options for: City 2 - 3 Cardiff: The Tactics

A shock scoreline, that.

Disclaimer: this piece will be different from nearly every other article or analysis written on Cardiff's shock win on Sunday -- and for a simple reason: I thought City were good enough to win and actually a bit unlucky with the end result, as goalkeeping errors and poor set piece defending undid them. More simply put: I don't think the sky is falling and I'd be surprised if Pellegrini does. OK, let's move on. 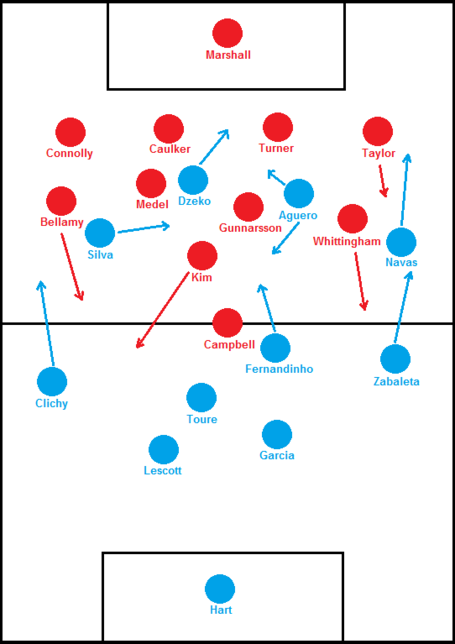 Cardiff were quite content to sit deep, conceding possession, and defending in a very structured and disciplined 4-5-1. The 4-3-3 that Cardiff moved forward in,  transformed itself quickly and easily into an organised and compact defensive shell: this, achieved by the wingers, Bellamy and Whittingham, dropping deep to support their respective fullbacks, Connolly and Taylor.

Something to address from the off: Cardiff's defending was magnificent and should be applauded. Too often, tactics that see sides drop nine (and sometimes even ten) players behind the ball in an effort to defend are written off and derided as being negative and reactionary -- not every side can successfully ping passes around the park while keeping the ball on the floor and having a real go at the top clubs (take note Blackpool).

A great defensive performance saw the Bluebirds (or are they the Malaysian Red Dragons now?) defend their eighteen yard box brilliantly, as they produced a rather stunning twenty-eight successfully clearances (28/29) recording a 97% success rate. Indeed, their total for the day was a ridiculous 44/45, 98% success rate -- with all but one of those coming from inside their own half. 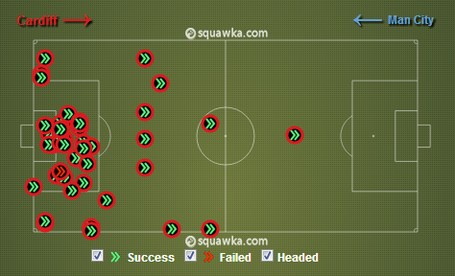 That chart is nothing to be dismissed, as it's an accurate and telling portrayal of Cardiff's defensive approach, structure and ultimate success. As Cardiff defended in a 4-5-1, I find it especially appropriate that in every area of the pitch where Mackay would have positioned a defender, they managed to record a clearance -- complete with each starting outfield player making at least one (with Ben Turner leading the way with a ridiculous a 15/15 success rate). 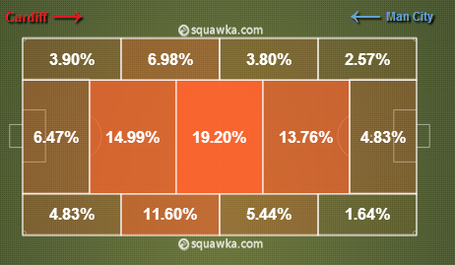 Considering the way City used to play upon encountering a defensive shell, these numbers should excite: specifically, the 6.98% and 11.60% areas (up from last week's 5.64% and 5.45% respectively in the match against Newcastle). Often derided under the previous manager for becoming far too narrow, today City managed a consistent wing presence -- although some will argue (and perhaps correctly) that it's the same sort of width created under Mancini: that dreaded fullback width. And it is largely true that on the left flank, Clichy provided most of the threat in the wide areas, although Zabaleta was hardly an attacking force on the right.

Yet why, with such a consistent wide presence, could City muster only one goal (and that coming for near thirty yards out) before the 92nd minute? Surely this problem of unexploited width will have frustrated Pellegrini more than any other facet of the match. Part of the blame must be shouldered by Navas, who certainly did not play as well as he can and will, but some must also be carried by Pellegrini who opted to take Dzeko off for Negredo, leaving Aguero on -- something that hurt City later in the match when chasing the game with crosses. But again, credit to Cardiff's defending. Malky Mackay approached this match from a position of strength: at home, in a country that City has now struggled in for three successive years, they set up to defend, to counter and to score from set pieces -- all three of which they did brilliantly.

The scoresheet will show his name twice – each goal coming from corners, twice having gotten free of Zabaleta’s (poor) marking. These goals have been brilliantly addressed here and little else need be said of the corners themselves. On Campbell’s performance however, much can be said – indeed he’s the man of the match in every way, as his work-rate and hold-up play, combined with the goals, enabled the Cardiff upset.

His heatmap shows an insatiable energy with a work-rate that is essential to any side that wants to defend with nine men behind the ball: the striker has to make himself available to every side of the pitch, both in hold-up play and in forward runs. 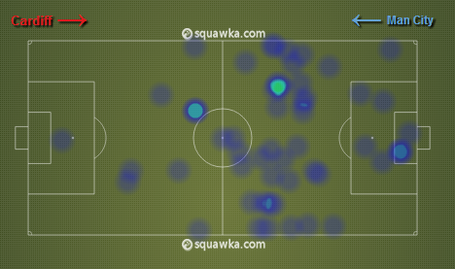 Likewise, his passing chart proves this further as he routinely made himself available for the outlet passes in the right, center and left of the pitch. And while he was shockingly ineffective in his passing from the left, it’s his presence alone, that makes the difference. 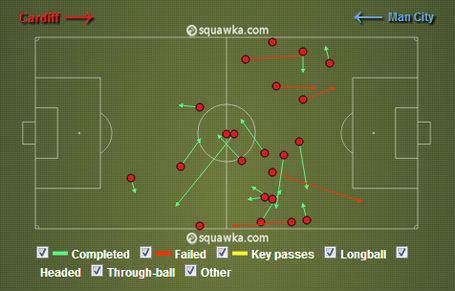 This is one of the two areas in the game where City especially missed Kompany (the other of course being the set pieces). One of the great strength's of the Belgium defender is his tenacity in coming up from the back line to physically pressure an opposing team's striker should he drop deep to receive the ball. Lescott for one, plays much better when paired with an obvious leader type (similar to Pique's relationship with Puyol for Barcelona) and when forced to assume that role for himself, he often fails to inspire.

Another match, another solo section for the increasingly divisive Ivorian. While last week it was his positive offensive contribution that landed him this spot, this time it’s for all of the wrong reasons. Though before I begin I should make clear that by moving him deeper, Pellegrini will not be expecting Yaya to be the offensive key that unlocks tight and compact defenses. For proof of this, see Nasri’s offensive position when he came into the match: while Milner stayed wide to the right, Nasri moved into the central area, replacing Fernandinho in position, though not role.

That said, he’s too good to not have a positive influence going forward, especially considering his range of passing – but against Cardiff that was rarely on display. His seemingly impressive passing numbers (92/103, 89%) from Sunday are significantly swayed by short, square balls. The chart below however, shows a much more realistic picture of his involvement in the Sunday’s defeat: 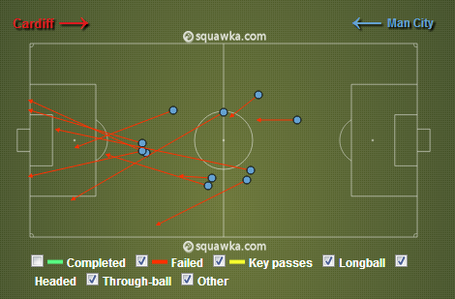 There are two ways of looking at this (and for the record, I believe each are valid): (1) Yaya only turned the ball over twice in City's half, a very good record considering he attempted 103 total passes while playing deep enough to routinely be passing in his own half and (2) he was exceptionally poor when playing any type of creative pass in the final third. Two of those passes were especially hurtful to City's offensive buildup; the pass from the center to the right, where he tried to play in Zabaleta during a more sustained attack and the pass he played on a counter having picked up the ball in his own half only to overhit a pass to Dzeko in Cardiff's right channel having dribbled to within ten yards of the eighteen.

Defensively, he was only really exposed once -- which unfortunately for him, resulted in Cardiff's first goal. And while offered very little resistance to Kim as the Cardiff playmaker waltzed past him, so too did Fernandinho and Clichy (and then later as Hart and Zabaleta really finished off the errors at the end). Cardiff weren't as dangerous on the break as they might have been considering the incredible disparity in possession, and a good deal of that is Yaya's defensive positioning, routinely forcing the Cardiff breaks into places that benefited the City defense.

While obviously not of his finer performances, I find it a bit of a stretch (actually an absurd stretch) to say that Yaya is a defensive liability and lazy going forward -- although again, even his heat map would show a more subdued match than he is clearly capable of.

Pellegrini's City are as overly-reliant on Vincent Kompany as Mancini's City were. The end.

Obviously not, but it's dangerous to read too much into one result with the team missing their obvious leader and one of the three best players at his position. That said, there's plenty for Pellegrini to fix while his Belgium skipper lies injured: the player movement was far too slow, especially in the final third where the forward players were too static and rigid; the width was never appropriately exploited; and the set pieces were especially atrocious. Oh, and something should probably be done about England's #1 goalkeeper who, for all we know, might still be trying to collect those corners.