Breaking Down The Corner Goals

Man City were undone on Sunday not by superior play but merely two moments of excellent delivery from Cardiff and two moments of poor concentration on City's part.

Share All sharing options for: Breaking Down The Corner Goals

A quick note: I hate the fact that the Premier League doesn't have a youtube channel or a pay and subscribe HD option for highlight packages..

A chart for Corner conversion% and Prevention%

None of these statistics are particularly bad, but nor are they particularly good. Not only is height, which City have, important when defending corners but the defensive scheme and concentration are two other vital attributes that are needed.

Where It Wrong Against Cardiff

Many people will talk about a breakdown of zonal marking or man-to-man marking but it appears that City ran a hybrid defensive setup on corners versus Cardiff, we'll get to that later.

The over-riding feeling that I have about corners is that sometimes, in any one game, the delivery is just of such high quality that it becomes almost impossible to defend.

Obviously, over a season some teams are better at defending corners than others, but as of now I don't know why Chelsea were so effective at preventing opposition goals from corners, or why Swansea were so bad. Some of it is tactical setup, some of it is luck.

Now, we are going to focus on City's starting shape for Cardiff's 1st goal from a corner. 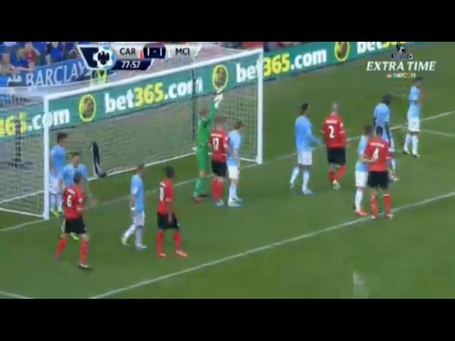 This is City's starting position: 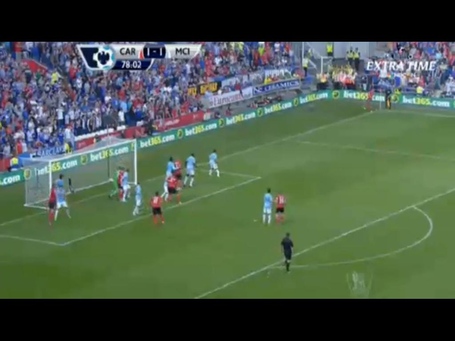 This is the City shape at the point of delivery of Cardiff's corner. 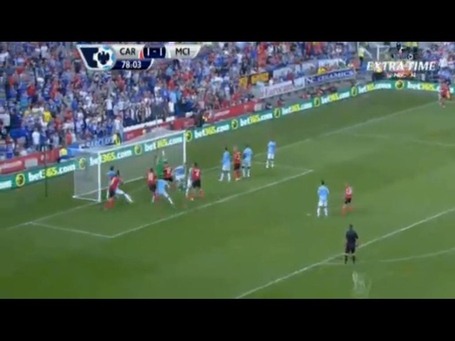 This is the money shot. Hart has just missed the ball (the white blur near what should look like hands) and Campbell is about to head the ball home.
The delivery from Whittingham cleared man City's two man defensive barrier at the near post. The delivery cleared Hart who was boxed in and distracted and fell to Campell who had separated from his marker, Zabaletta.
If you want to argue that the fault for this goal lies firmly at the feet of Hart and Zabaletta, you would be justified in doing so. But it must be said that it was a hell of a delivery. Hard, flat and in the perfect 2 yards squared patch that avoided the goalkeeper but fell short of Garcia who was marking at the back post.
Outcome: Hart is at Fault, Zabaletta even more so, but it's just such a good delivery.

Onto Cardiff's second goal from a corner. 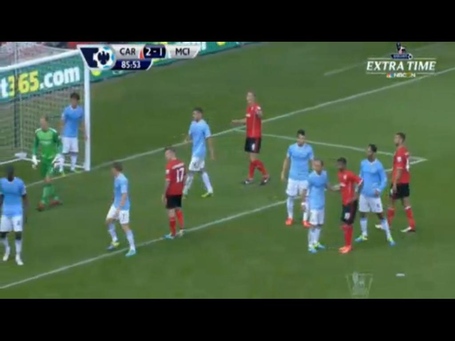 City run exactly the same defensive setup for this next corner goal against. 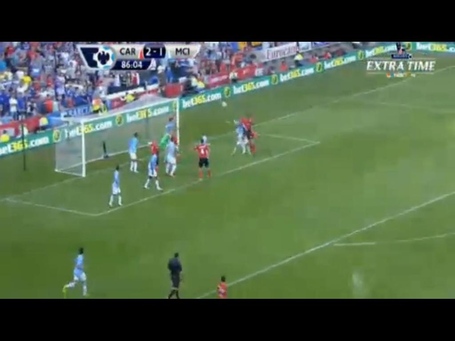 Again the delivery from Cardiff was an excellently placed in-swinger. Again the ball was deep and well over the head and reach of Hart. Frazier Campbell again gets the jump on the defender and has a relatively free header at goal. Campbell does well to powerfully head the ball down in-between Silva and Hart.
It was another simple goal which stemmed from excellent delivery, a striker who outperformed his marker and a lapse from Campbell's marker.
If we separate the quality of the delivery from the apportioning of blame then if the first goal was due to faults by Hart and Zabaletta then the second goal was purely down to Zabaletta's lack of concentration in tracking his runner. Disappointing.

The two goals Man City conceded from corners don't appear to be due to some tactical weakness at corners but more to do with individual errors and lapses in concentration. These issues can be iron out, Zabaletta is not a player noted for having any issues at set-pieces.

Pellegrini will surely spend more time focusing on set-pieces in the coming days, and he will reiterate the message that concentration is absolutely vital against teams who's main goal threat will come from set-piece situations.

If I were in charge, I'd consider changing the two man near post barrier to a one man barrier, and put the spare man - Toure - in a central position on the edge of the six yard box. This would provide a little extra cover against those hard flat deliveries that so caught Man City out on Sunday.

Anyhow, no need to panic., City weren't outplayed, they were caught out at set pieces, which is fixable.

If you are feeling down about yesterday's result, listen to this, it's beautiful.