Jennifer Lawrence vs Khaleesi. This is going to be good (if you haven't watched the NBC Sports promo with Jason Sudeikis, this won't make any sense. Go watch it, then come back.)

Ok. Where were we.

Manchester City thumped Newcastle 4-0 on Monday. It should have been 5, and could have been more with a Yaya penalty shout turned down, and a few blatant handballs in the penalty area.

Cardiff City lost 2-0 to West Ham, an inauspicious return to the Premier League. They didn't have a shot on target until the 85' minute mark. That's brutal.

What do the stats show?

Here's the Action Areas for Cardiff against West Ham 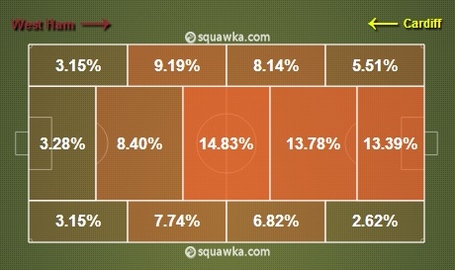 1. They spent 4 times as much time in their own goal area as they did in West Ham's. Some of that was due to the fact that West Ham just played long ball after long ball, pinning them back. Cardiff had 32 (32!) clearances in the match.

2. More width on the right than on the left. This will probably be the same on Sunday, especially since the players on the left will have to deal with Jesus Navas and Pablo Zabaleta. This could mean more action in Gael Clichy's area. It could also mean that Manuel Pellegrini decides to focus some more of the attack on that side, looking at it as a weaker side.

In addition, Cardiff had 12 shots, but only 1 of them was on target. Their one bright spot was Gary Medel, who completed 55 out of 58 passes. Most of those were short passes around the middle of the pitch, but he did complete some clever long diagonals into the attacking parts of the pitch.

Vincent Kompany - expected to be out for at least a month with a groin injury. Might not be back for the Derby on September 22. That would be bad. Very very bad. I put our odds of buying another CB at 95%.

Matija Nastasic - seems to have progressed, and Pellegrini says that he has been "working normally" this week (the next three are per @RobDawsonMEN).

Micah Richards - might be ready next week, has been training.

Stevan Jovetic has been training normally, but "isn't 100 percent." Don't think that he'll be risked, since there are other guys who can play the positions he does (Silva, Nasri, Milner). Hopefully we'll see him against Hull City for his home debut.

With those injuries in mind, here's how I think we'll line up tomorrow:

Unfortunately, I don't think that we'll see Nastasic in the lineup. Hopefully we won't be too negatively impacted with Garcia and Lescott at the back. They did pretty well for the last 30 minutes against Newcastle, but by then the game was well out of reach. It could be a little bumpy.

I expect Negredo to come on at about the hour mark, either for Aguero, or for Silva (putting Aguero out wide on the left). I think that Pellegrini is playing a balancing act keeping Dzeko focused and engaged. That probably means that Negredo will be used to rest Dzeko. He can't use him as a threat to replace Dzeko to motivate him.

Things to Watch for This Week

1. How does Dzeko play this week? He was very unselfish last game, but didn't get a goal. He was the man of the match, and got all the plaudits, but no goals. Will he be willing to do the same this week? Playing in Pellegrini's system means going out wide at times, away from the goal action. He might be less than willing to leave the goal-scoring to others.

2. Lescott and Javi. These two have the combined potential to score 3 own goals per game, and not even blink. It will be interesting to see which Joleon shows up this week. Sometimes he's laser-focused, and very good. Other times he seems to lose a little concentration. Javi doesn't have the best instincts, but is a better option than Boyata. Makes you wonder if they regret loaning out Rekik, especially considering how well he has played so far.

3. Yaya and Fernandinho - last match, Yaya sat deeper, while Ferna roamed around in a more advanced role. I'm wondering if that will be the same, or if they will employ more of a double pivot, trading times moving forward. Either way, they will be key to the success. With 173 out of 187 passes successful between them in the match against Newcastle, they drove our team to success.

What do you think?

I think we win this one 3-0. Wouldn't surprise me if we scored more than that though.