Share All sharing options for: City 4 - 0 Newcastle: The Tactics

A harbinger of things to come, that. While few doubted that Manchester City’s new signings would eventually come together to form a potent attack, there were doubts over how long it might take to play the freeflowing, expansive football that City’s owners have been calling for ever since Mancini’s dismissal in May. After Monday’s five-star performance, those doubts were all but put to bed.

Attacking with a style and speed that few sides could equal, City’s new arrivals tormented a helpless and hopeless Newcastle side that looked devoid of any solution or response (seriously, is it too late to back Pardew in the managerial sackrace?). From the rejuvenated Dzeko to the newcomers Navas and Fernandinho, City moved the ball and themselves about the pitch in effort to find, create and exploit space. 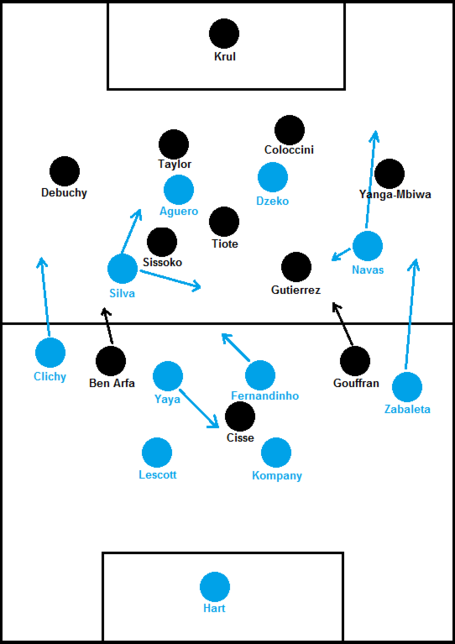 While many (myself included) wondered how Pellegrini’s new City would look and play, and if the rumors of a 4-3-3 would prove correct,  we quickly found that the new era at City would look remarkably similar to Pellegrini sides of old – specifically the ever-adventurous and swashbuckling Villarreal. I’ve written elsewhere on how that side functioned so I won’t repeat it in detail, but the formation is denoted as a 4-2-2-2, with two holding central midfielders, two attacking midfielders above and outside of the deeper pair (often referred to as interiores), completed at the top by two strikers, level on width as the holding midfielders.

The formation – at least as Pellegrini employs it – is predicated on the notion of movement. The holding midfielders have traditionally acted as a double pivot, alternating in forward runs while always ensuring one sits deep enough to function as a shield for the back four, though this appears to be altered for this side, as Yaya Toure sat deeper than Fernandinho for the majority of the game (more on this later). The interiores are tasked with drifting inward to create passing triangles both with the holding midfielders and the strikers (although again, this looks to be quite flexible as Navas is at his best when staying wide and racing to the byline). Lastly, the strikers are asked to move – a lot; forward and horizontal runs especially, but also the deeper dropoffs that see the forwards link with the midfielders.

Newcastle began the match in a 4-3-3 that saw Cisse play up front by himself (a position he's not well suited to), Gutierrez sitting deep in midfield (why Pardew didn't recognize the need to play Anita there instead is truly puzzling), and Yanga-Mbiwa (surely one of Newcastle's two best central defenders) at LB. Playing Yanga-Mbiwa at LB on Jesus Navas's Premier League debut has to be one of Pardew's more stupid decisions (although there are so many, it's difficult to say for sure) -- after seeing the team sheets, I'm sure many City supporters felt giddy at the idea of Navas running at Mbiwa (with the Frenchman in his less than natural position). Gutierrez meanwhile, offered little by way of resistance to City's midfield, eventually allowing Pardew to stumble into a better XI as the Argentine's injury forced the Newcastle manager to play Anita. And as for Cisse, he's a moody striker who requires consistent service or else he fades in out of matches -- thus it made no sense to play him alone and up front, increasingly isolated from his teammates as the match wore on.

Space, like possession, is a footballing commodity. Often the team that has more of each will create the better (and more frequent) chances. In Pellegrini’s system, space is created, found and utilized through frequent and fluid player movement. The formation is not a rigid, confining structure in which to contain play, but rather it’s a living organism, with ebbs and flows, shifting with player movement. Each individual movement welcomes a response, where one player vacates space to find it elsewhere, another player moves into the now vacated area. As the players interact with each other, pulling the opposition to and fro, the pitch is always covered; the ball is always moving.

For Silva, who began as the left interiore, this meant drifting inward, making triangles with Fernandinho, Toure (of whom he passed to and received the ball from the most) and Aguero. For Navas, it sometimes meant similar inward movement as Silva, but also meant far more frequent forward runs (with and without the ball), sometimes sprinting to the touchline and sometimes linking with Dzeko who would routinely drift out to the right flank. Navas’s speed and willingness to go out to the far sideline is a new element that many had been clamoring for under the previous regime – a great showing from the new Spaniard.

Dzeko (And yes, he gets his own section):

As many on Twitter and elsewhere have noted, Edin Dzeko looked a new player entirely – almost "like a new signing" right, Wenger? His first touch and passing were certainly very good today (areas of his game that have often been points of contention in the past), and his movement was truly top-notch. His pressing was emphatic and consistent and he never seemed to tire. In fact, he often reminded me of Mario Mandzukic, who was a key piece to Bayern Munich’s 2012-13 treble wining campaign. He continually moved out to the wings with or without the ball so as to drag Newcastle’s central defenders away from goal, thus opening space in his then vacated area (space that Silva and Aguero were especially ready to exploit). Whether it’s the outspoken support he’s received from the new manager since Pellegrini’s arrival or something else or a combination of both, he’s in the type of form that will make it quite difficult for Negredo to break into the starting eleven. A real shame that he didn’t manage a goal.

The arrival of Fernandinho, a box-to-box player in the prime of his career, was always meant to signal the changes in the City midfield; the most obvious of which was to be the alteration of Yaya Toure’s role, who at 29 is entering an age where powerful runners have often begun to fade. When I wrote a preview piece of what a 4-3-3 might look like with City’s new signings, I put Yaya in the role of defensive midfielder, playing behind Fernandinho who would act as the #8. And while the midfield three was obviously different, the relationship between Yaya and Fernandinho was not.

Rather than functioning as a typical double pivot with each player alternating their forward positioning, Yaya sat deeper than Fernandinho for nearly the entire match. Indeed, it was Yaya that would drop between Kompany and Lescott to pick up the ball, while Fernandinho wandered higher up the pitch in the pursuit of space. And likewise, it was Yaya who sat directly above the central defenders on the rare occasion that Newcastle managed to break. Below are the heat maps of each player depicting these roles: 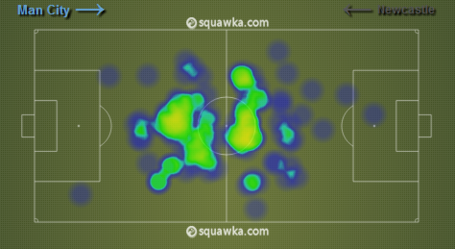 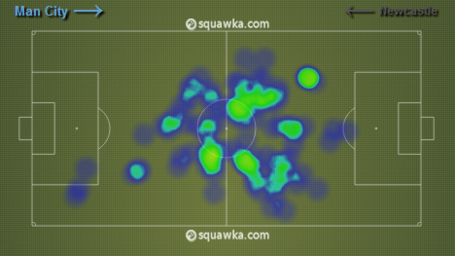 In moving (and keeping) Yaya deeper, into that holding role, Pellegrini essentially gains another creative force in the starting XI. This time last year, it was Barry in this role – a player who, for all his strengths, is not half the passer Yaya is, while also providing less muscle than the Ivorian can bring. With Fernandinho playing above him, Yaya becomes to City what Sergio Busquets is to Barcelona: the first level of attack, the hub in midfield, and the protection to the defense. Interestingly enough, Busquets was tasked with replacing Yaya in that exact position after the Ivorian freight train moved to the Etihad. Yaya was phenomenal against Newcastle, and while it may have been in more subtle way than we’ve grown accustomed, he bossed the game with his movement, passing and positioning. His passing chart boasts a 93% success rate on 103 passes and his 96 successful passes were the most of any player in the Premiership through the first round of fixtures: 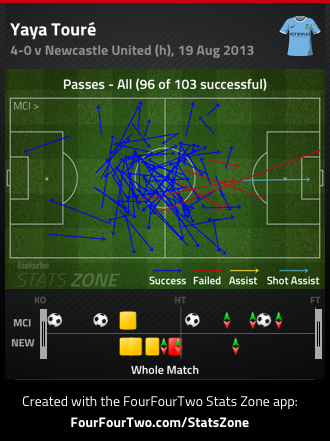 The high-level pressing game had never been a staple of Mancini’s City, but it only took one match to know it will be a key tactic to Pellegrini’s. The total tackles chart below shows the entirety of City’s 20 tackles, nine of which occurred in Newcastle’s half. 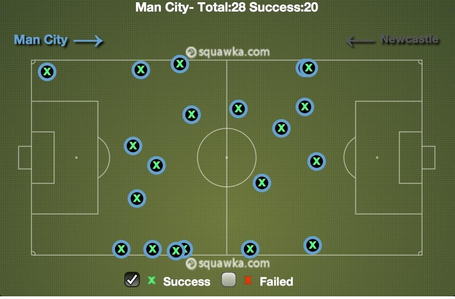 You didn’t read that wrong, damn near half (45% specifically) of City’s tackles were closer to Krul’s goal than Hart’s. As a team and beginning with Dzeko and Aguero, City pressed the ball high up the pitch, leaving Newcastle little time and next to no space to try and push forward from. The result? Newcastle rarely kept the ball and found Cisse increasingly isolated as the match wore on.

Pellegrini’s City will be fun to watch. Solid in defense, powerful and skilled in the midfield (I almost can’t wait for the two league fixtures between City and Spurs that will see two of the most physical and powerful midfields in the world compete for time and space), and brilliant in attack, this side has the makings of something special.

And I nearly forgot, the last time City won the opening league game 4-nil was in the 2011-12 season – Aguerrooooooooo.