Through examining the action areas during the 2012-2013 season, what key trends can we find?

Share All sharing options for: Action Areas and Weaknesses

Before we get into the meat of what I want this article to be about, humor me for a second.

If I were to ask you to describe the perfect combination of attacking passes from Manchester City players last season, what would you say? Mine would have gone as follows:

Vincent Kompany wins the ball just outside the penalty box, then passes quickly to Matija Nastasic to his left. Nastasic finds Yaya Toure through the middle with a well-weighted 20 yard ball. Yaya dribbles up a few yards before finding David Silva on the left touchline. Silva cuts inside, beating the RB, sucking in a CB and a DM, before passing a diagonal pass to Carlos Tevez. Tevez fakes a shot, drawing in another defender, before playing a perfect through ball to Sergio Aguero, who then fires a ball past the keeper at the far post.

That was so beautiful, it brought tears to my eyes just thinking about it. The best part is, we've all seen sequences like that from City over the past few seasons. There have been passages of play that make you sit back and be grateful you're a blue.

Now think about the worst playing that we saw last season. In my head I see a bunch of players getting bunched up in the middle of the pitch for the attacking third. Silva, Samir Nasri, Aguero, and Tevez all trying to find a yard or two to fit the right pass in, or get a good shot off. The defenders have 6 or 7 players back, all limiting the space available.

That sequence happened far too often. It seemed to happen more against teams who were determined to defend deep, limiting the space that attackers had to work in. The lack of space also seemed to correspond directly to the way that Mancini's squad looked to create width. By using Silva and Nasri to cut inside, from opposite flanks, rather than staying wide, all four players on a back line are able to stay more narrow, rarely leaving the penalty area.

Far too often, the main source of width was from the fullbacks. It's good to get some attacking width from those guys, but they can only do so much in spacing the other team. Fact of the matter is, teams aren't going to send 2 defenders out to stop Gael Clichy. He doesn't strike fear in opposing defenses.

The detailed match statistics that Squawka puts together are pretty fascinating. In addition to showing the usual stats, they also have some pretty interesting ones. One of my favorites is the Action Areas.

It has the pitch broken down into the different parts of the field, showing how much time a given player spent in that area, or broken down by the whole team.

Here are two matches that we lost last season, one was the 3-1 loss at Southampton, and the other a 3-1 loss at Spurs. They show the areas for the whole team. 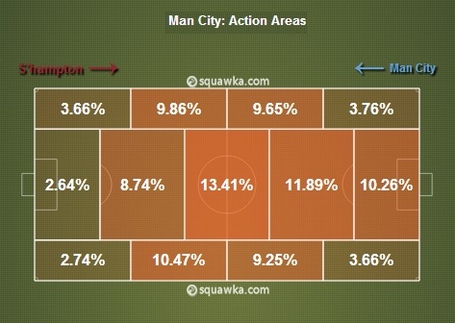 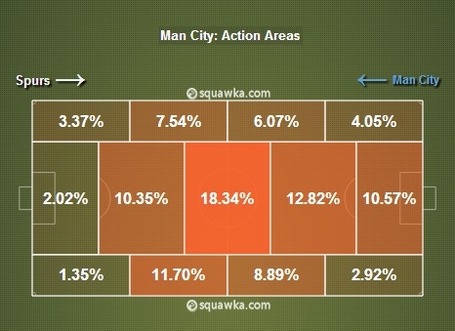 Now here are two Action Areas from matches that we won, and that we dominated. The first one is from a 4-0 spanking of Newcastle, and the other a 5-0 win against Aston Villa. 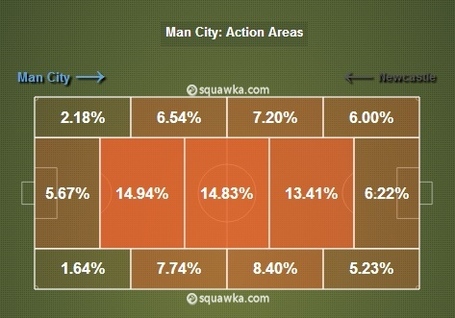 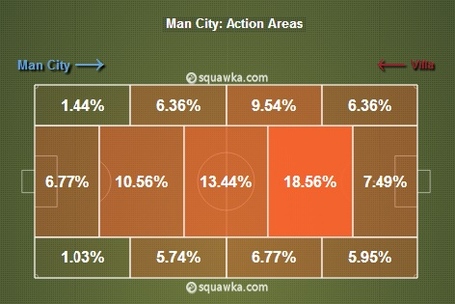 What do the Action Areas show?

When I look at these two different results, a few commonalities jump out at me.

3. The ratio of possession in both areas right in front of each goal. In the 2 losses, the ratio of time City spent with the ball right near our own goal compared to near the opponent goal was 4 - 5 times higher. Meaning, we spent 5 times as much time with the ball in our own goal area as we did in their goal area.

If you had a team who kept falling into the same pattern against well organized defenses, what would you do to give that team some better weapons to break it down? I think that I would follow the same pattern that the Man City brass did.

1. Bring in a world-class winger. Someone who will bomb down the touchline, creating width in a myriad of ways. I would want a player who can beat pretty much anyone in a footrace, so that defenders would have to throw a second or third defender at him to slow him up. I would also want someone who could drill a cross when he needed to, or just be comfortable playing a one touch passing game near the goal line. As someone (can't remember if it was Zac, or Ben, or someone else) pointed out, that's where Jesus Navas lives and breathes. Here's a match of his where he did just that last season. 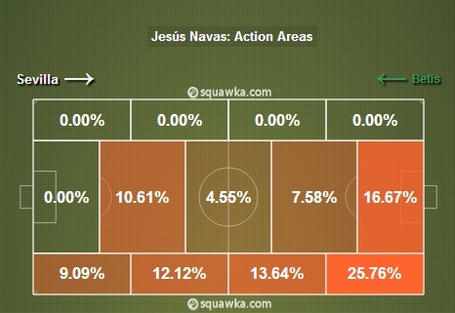 That is an amazing performance of width and attacking play. Not only did he spend a quarter of his game in that weak zone, on the flank near the goal, he also spent another 16% of his time right near the goal. This is exactly what I would want from my problem solver. Get behind the defense, make them defend sideline to sideline against me.

2. Unleash David Silva. I want David Silva to be the man pulling the strings as much as possible. He is so good when he has a little bit of space and enough time. Just bringing in Navas is going to free up a lot of room for him on the other side. Teams will have to be sending guys at Navas, and the front striker (Dzeko, Negredo, Aguero). Silva can get in behind defenders that are caught watching the other side a little too much. If he gets that space, there will be a lot of perfectly placed pull backs across the 6 yard box.

As if that tactical freedom wasn't enough, the addition of Jovetic can add another set of options. He is adept at playing on the left, which would allow Silva to play right behind the central striker. Imagine Silva pulling perfect passes left to Jovetic, or up the middle to Aguero, or wide to Navas. Chills. Gives me chills. I think that Merlin is going to have a great season.

(Final note about Silva, he played every match of Euro 2012, which ended up playing a big part in how tired he was. He should be in a lot better shape after a summer off)

3. Balance the midfield. Yaya Toure is unreal. Sometimes I forget how good he is, and then I go look through his stats, and remind myself how much he actually does. The only times I found myself getting frustrated with him were when he would try to do too much. It's hard to get mad at a guy when he doesn't have a midfield partner who is anywhere near his talent level. Here's what he had to work with last season.

Gareth Barry has plenty of supporters, and plenty of haters. I am mostly ambivalent to him, but there were a few games where he opened up a can of suck. Javi Garcia is just the worst. I hope that he gets gone as soon as possible. Jack Rodwell is money, if he can stay healthy. He's just a little too risky to depend on right now.

I think the bosses took a look, realized that Yaya just turned 30, and realized they need someone to partner with him right now. There's been a lot of discussion whether or not we overpaid for Fernandinho, I think the need to win now means that you overpay for someone who is ready to fit next to Yaya immediately.

These two playing with each other are going to push the ball forward out of the defense and into the attack quickly and efficiently.

I am so freaking excited for this upcoming season that I can't stand it. Honestly. I probably check the fixture list at least once a day. I want the season to start now. I want to watch these new players fit in with the good ones we already have. I want to watch Pellegrini figure out how to fit as many world-class players as he can on the field at once.

The brass seem to have identified the biggest weaknesses in the City team from last season. They perfectly plugged those gaps with the kind of players that will allow us to challenge for the Premier League title, and have a good shot at doing well in the Champions League.