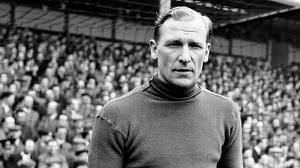 By now I'm sure you will be aware of the sad news of the death of former City goalkeeper Bert Trautmann. In an era where the term 'legend' is tossed around with ease his was a career fitting of the description, without even accounting for the remarkable back story to his time at the club.

For me, Gary James is unparalleled in terms of chronicling the history of the club and he has written about Trautmann on his Facebook page today (do check out the full post):

City signed Trautmann in November 1949 but the move was not popular. For at least a month prior to the transfer newspapers were publishing letters from fans threatening to boycott the club. City had a large Jewish support and many believed the arrival of a former German paratrooper was one step too far. The national media soon caught on to the story and considerable negative publicity was generated.

There is also a nice tribute on the official site from former club secretary Bernard Halford and this fine obituary piece in The Guardian from Brian Glanville.

And some YouTube footage of that FA Cup final: