If you’re not a huge fan of the color purple, the city of Florence, Serie A, the Europa League or Montenegro’s footballing association, then chances are City’s newest arrival, Stevan Jovetić, is a bit of a mystery to you.

Aside from being quite good (and reasonably affordable considering age and talent), he’s incredibly useful to a tactically flexible manager. His previous club, Fiorentina, played last season in either Vincenzo Montella’s 3-5-2 or in a traditional 4-3-3, with Jovetić primarily in the left forward and left wing positions respectively. Of Jovetić’s 12 goals from open play last season, all but three came from left of the penalty spot – that is to say, he likes moving inside from the left wing onto his strong right foot and shooting. His shooting chart from last season’s opening match against Udinese proves this: 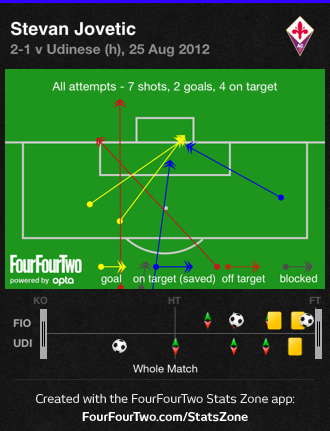 Jovetić can play in any of the four attacking positions in a 4-3-3 or a 4-2-3-1 (although because he is right-footed and crossing his poorest attribute, he is least suited to the right side) or in either of the striking positions in a 4-4-2 – although with Agüero, Negredo and Džeko all available, the striker position is well and truly covered, making it unlikely he will be used as the center-forward or target man. Jovetić is at his best on the left wing, meaning we will be seeing a lot of the 4-3-3 and the 4-2-3-1, with Jovetić most likely occupying the left attacking positions in both.

City have seemingly approached this transfer window with one objective: to add squad depth. And as such, it makes guessing formations quite difficult. Indeed, City’s current strike force makes it nothing but guesswork, as it seems near impossible to field any three of Agüero, Negredo, Jovetić and Džeko without having to play one of them a bit out of position. If Pellegrini is determined to regularly field three of them, the only option seems to be a 4-2-3-1 with either Agüero or Jovetić on the left, and the other behind either Negredo or Džeko – but that would mean a regular substitute role for either Silva or Navas, something I don’t envision and would not support.

Some have already speculated that Jovetić’s arrival pushes Džeko out, a sentiment I understand but don’t necessarily agree with. Less than a week ago Pellegrini himself said "I spoke with Džeko two weeks ago, whilst he was on holiday and I don't have any issues with him. He is staying in Manchester because he is a very important player for us. This year he'll show what he's capable of." While that was before the Negredo deal was made official, it was still abundantly clear at that time that City were holding discussions with Sevilla for the Spanish striker. There is the possibility that it was nothing but pandering from Pellegrini so as to keep Džeko’s price tag at his market value in an effort to avoid the recent Bayern/Gomez situation that saw the German striker sold for well beneath his market value because the club had made it clear he was not in Pep’s plan.

As it’s all speculation at this point, let’s take Pellegrini at his word and assume Džeko stays. The options then are: two target big men in a 4-4-2 (I strongly dislike this and doubt it would be a regular occurrence), one target man with one little man sitting behind him in more of a 4-4-1-1 (getting better), or a target man to lead the line with a little man either behind him (in a 4-2-3-1) or to the left of him in a 4-3-3 (and we’re there). My assumption is that we start the season one of two ways: (1) in a 4-3-3 with Jovetić on the left, Agüero in the center and Navas on the right with a midfield consisting of a staggered triangle with either Fernandinho or Yaya in the deepest point and the other of that couple just above him and to the outside, with Silva sitting in the #10. 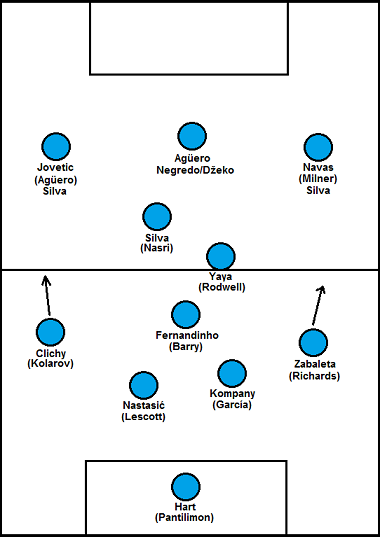 Or (2) in a 4-2-3-1 that has Negredo leading the line with an attacking midfield three of Silva on the left, Agüero or Jovetić in the center (the way Tevez sat behind Agüero at the end of last season), and Navas on the right, leaving Fernandinho and Yaya in an impressive double pivot beneath them. 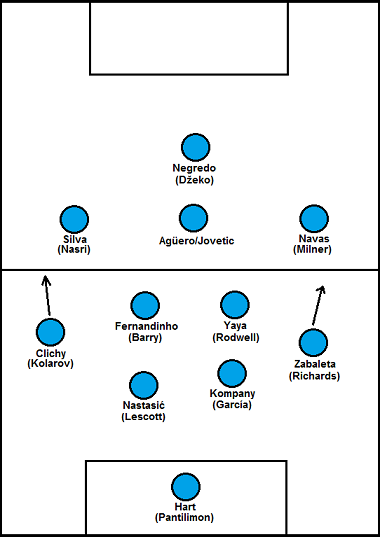 A few thoughts on those formations: firstly, I cannot figure out a formation that sees any of Nasri, Milner or Džeko in the starting eleven – making our bench one of the most formidable in the Premier League; secondly, whatever you think of the price-tag (and most think we overspent), pairing Fernandinho with Yaya in the midfield makes for a combination of power and technique the likes of which don’t come around often; thirdly, I wouldn’t be surprised to see Pellegrini use Javi García in a substitute centre-back role, where I actually thought he played well in yesterday’s friendly; and finally, Jovetic's arrival provides the sort of tactical flexibility that Pellegrini thrives with, while adding the important squad depth that should be necessary if City are to compete all season in all campaigns.