An in-depth look at Málaga’s tactical nature during Pellegrini’s nearly three year reign at the club.

Pellegrini’s spell at Málaga, while short, is an incredible case study in both tactics and takeovers. Pellegrini took over at the Spanish club in November of 2010, months after Sheikh Abdullah Al Thani pumped millions into the club in an effort to break up La Liga’s duopoly at the top. Al Thani’s arrival allowed for several high profile transfers, such as Santi Cazorla and Nacho Monreal (both of whom are now at Arsenal), Jérémy Toulalan, Joaquín, Ruud van Nistelrooy and of course, Isco. As many now know, Al Thani chose, rather abruptly, to withdraw his financial backing, resulting in huge debts (with some saying as high as 84 million pounds) and forcing the new arrivals to be sold as the wage bill was slashed. And so, Pellegrini’s reign at Málaga was filled as much with triumph and euphoria as with heartache and disgust.

With the rather ugly background now provided, let’s look at Pellegrini’s formations and play style – first with the star-studded side of 2011-2012 season and then with the post-fire sale squad of 2012-2013.

Fresh off his then-record breaking season at Real Madrid in 2009-2010, Pellegrini opted to preserve parts of that side’s playing style, most notably the double pivot. The formation itself can be understood as a 4-4-2, a 4-4-1-1 or even a lopsided 4-2-3-1, dependent on the central attacking player. Pellegrini opted for a slower, more methodical buildup style, emphasizing possession and technical passing, and with players like Cazorla and Isco the creativity available in this side was evident. 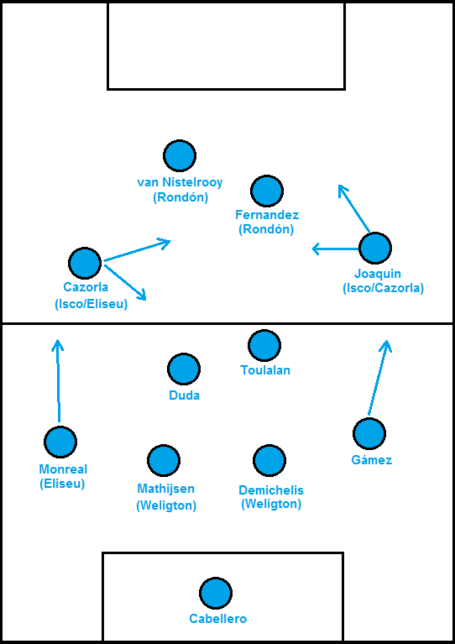 The back four was very similar to Villarreal’s back four: two towering centre-backs (a rotation of Mathijsen, Demichelis, and Weligton) flanked on each side by athletic fullbacks (Gámez, Monreal, and Eliseu) who were asked to move forward and provide width in the overlap. Eliseu was especially offensive at LB, often playing so high up the pitch he functioned as a wingback, forcing Gámez to stay deeper, joining the centre-backs on the defensive line and essentially forming a back three while in possession.

With players like Duda, Toulalan, and Maresca sitting deep in the midfield, Pellegrini again opted for the double pivot that he used in his time at Madrid. In front of them were the wider midfielders: Cazorla, Isco, Joaquín, and Buonanotte. They offered creativity, technicality and secondary scoring (the former three combined for 16 goals in the 2011-2012 season).

Pellegrini’s first full season was a whirlwind of adventure, a fairytale full of financial backing, exciting players and on-field success, including a 1-1 draw with Madrid at the Bernabeu and Champions League qualification for the first time in the club’s history. But when Al Thani pulled his backing and slashed the wage bill, the fairy tale came to an abrupt end, as Pellegrini now had to function without his star player (Cazorla) and the loss of other important players (Monreal, van Nistelrooy and Rondón).

The 2012-2013 season became (as all City fans are now painfully aware) The Isco Show – no longer in Cazorla’s shadow and with the club desperately in need of a creative fulcrum in the midfield, the young Spanish playmaker blossomed into a star. 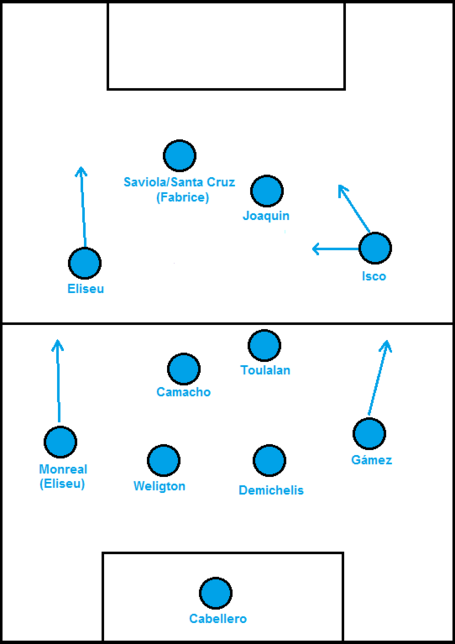 Playing almost every match in a 4-4-2, Pellegrini perhaps changed his focus from La Liga to the Champions League as Malaga advanced to the quarter-finals before being unceremoniously dumped out by Borussia Dortmund, in perhaps the most dramatic match of the European season. The 4-4-2 had a strange level of consistency, especially in defense where Willy Caballero anchored a unit that included Monreal (until his exit in January), Weligton, Demichelis, and Gámez. Again – and is the case with each team he’s ever coached – Pellegrini expected the fullbacks to move forward in attack. To further highlight the fullback's role in a Pellegrini attack look at the location of passing by Gámez and Monreal in a match against Real Betis: 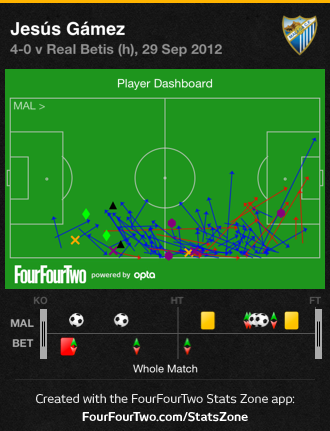 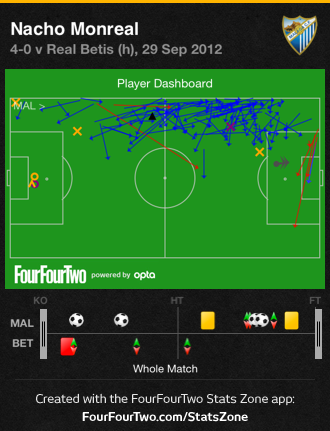 In both a positional and a passing sense, they are so far forward while completing so many passes, you would be forgiven for thinking they were wingers.

The biggest change came on the left side, where Cazorla’s exit forced Pellegrini into a tactical change: actual and sustained width in midfield. Eliseu brought width and pace to the left side where Cazorla had previously brought technical passing and trickery while drifting inward (almost identical in nature to David Silva). The departures of Ruud van Nistelrooy and Rondón made way for a striker by committee approach that featured City’s Santa Cruz (who had joined on loan), Saviola and Joaquín. Isco was moved to the right (although he often switched with Joaquín in the deeper forward role) and was charged with creativity, solo runs, and goals. The biggest difference between seasons was the change in tempo: without the quality to rely on routinely out-passing other sides, the 2012-13 side had to resort more often than previously on counterattacking, with Eliseu’s pace becoming especially important.

What does this all mean for City? I think I can comfortably predict two carryovers: offensive width from the fullbacks and a slow buildup centered on passing triangles. So much still depends on pending arrivals: if Negredo does actually come it would be difficult to imagine him not starting, forcing Agüero out to the left in a 4-3-3 or as the deeper striker in a front two. If the rumors of the 4-3-3 are just that and Pellegrini does opt to play a 4-4-2, I would imagine the following (substitutes in parenthesis): 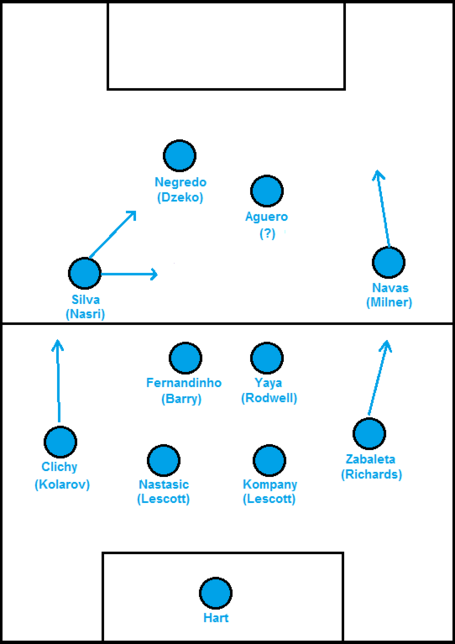 The Fernandinho/Yaya midfield would operate as a double pivot, with both players alternating in their forward movement while the other covered defensively. And in the case of a natural overload in midfield on account of only playing two centrally, Agüero would certainly be capable of dropping deeper into the midfield if it was being overrun. While I’d prefer a 4-3-3, this is still an impressive eleven, strong in defense and capable going forward, although we would perhaps be overly dependent on the either of the midfielders carrying the ball out of defense, something that plagued the transitions for most of last season.