What Navas and Fernandinho mean for City's tactics

Share All sharing options for: What Navas and Fernandinho mean for City's tactics

Given Txiki Begiristain's history and familiarity with the 4-3-3 from his Barcelona days, Pellegrini’s obsession with possession and passing triangles and the new arrivals of Jesus Navas and Fernandinho, all signs are pointing to a shift towards the 4-3-3.

Assuming the new manager is Pellegrini (a fair assumption, in my mind) I doubt we’ll see a 4-2-3-1 very often: in Pellegrini’s last three jobs (all in La Liga) he played a 4-2-2-2 with Villarreal, a 4-2-3-1 with Madrid and a combination of 4-4-2, 4-4-1-1 and 4-3-1-2 (the diamond midfield) with Malaga. The 4-2-3-1 with Madrid was done more for practical terms than preference: Florentino Perez had just finished signing Ronaldo, Alonso, Kaka, and Benzema and had to find a formation that fit them without giving up too much defensively – that system was the 4-2-3-1. If you look at the current teams that excel in that formation, you see largely counter-attacking giants, teams that don’t look to keep possession: Chelsea, Madrid and Borussia Dortmund come to mind.

With the arrival of Fernandinho – a player who is very similar to Yaya – City now have two world class players who play the same(ish) position. In a 4-3-3 with a staggered midfield triangle, either player would be comfortable in the deepest holding position (#6) or the middle position in the triangle (the #8). This would leave Barry, Garcia and Rodwell on the bench or an exit for the former and the physio table for the latter, giving us good midfield depth in a season that we can hopefully challenge for much of the year on three or four fronts. The creative midfield position (#10) could be filled by any number of players: most likely Silva, Milner or Nasri, the latter having had his best performances at Arsenal in that very position.

The forward three would be filled by Navas on the right and Aguero in the center with a mystery player (read: Isco) on the left. Silva plays on the right wing in Spain’s 4-3-3 which allows him to drift into the center on his strong foot, but with Navas’ arrival this would be the last place I would expect to see him. Nasri would be the opposite, cutting in from the left would put him onto his stronger foot making him a candidate for this position; that said, Silva can play on the left and will be one of the first names on the team sheet so if we don’t buy Isco or another player of that ilk, I would expect to see Silva there. With how deep Aguero and Tevez like to drop, the 4-3-3 could look at times like false nine – a position Aguero has taken up on occasion for Argentina. Indeed, Aguero does often look his best when he picks up the ball in deeper positions and has a run at the defense, not unlike Messi.

I've attached a mock-up of what this 4-3-3 might look like: again, if we were to add Isco, I would put him in Silva's position and move Silva to the #10, dropping Nasri to the bench. 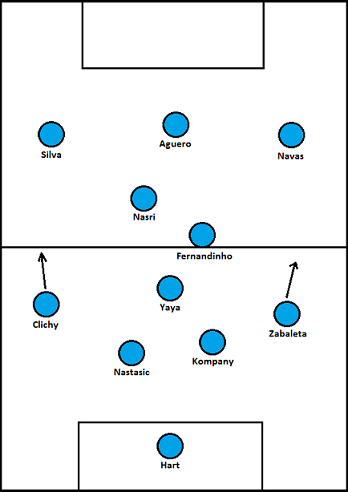