Carlos Tevez is to be sold to Juventus for a fee believed to be £10m. It will be a sale which divides opinion, but we must now focus on how Man City should replace Carlos Tevez.

Share All sharing options for: How Should Man City Replace Carlos Tevez?

The Transfer Is Now Confirmed

Carlos Tevez has completed his move from Manchester City to Juventus, the Italian club confirm on Twitter pic.twitter.com/1A2qFztiTS #MCFC 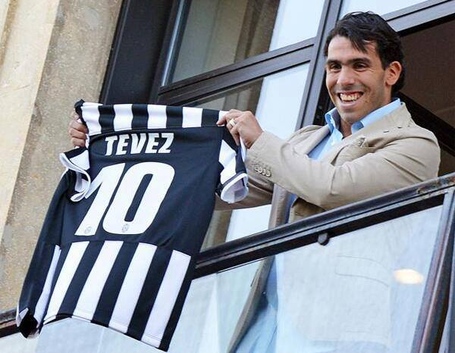 Unless I am very much mistaken Carlos Tevez may be the one player I have written about most frequently on this blog. From the heights of the initial cross town transfer coup to his stellar debut season and all the way through to his to 'strike', it has never been dull with Carlos. Never has his talent been in doubt, either. But it's over. No more trouble, no more splitting of fan opinion. I for one wish him well at Juventus. Life is too short to become burdened with dislike for a man I will never meet over an incident I will never know anything about. Tevez was brilliant for Man City and he truly carried this team at times.

In this article I want to look at a few things: How good was Tevez, is his skill set replaceable and, if so, how can Man City replace him?

I am a huge admirer of Carlos Tevez, but even I have a few reservations. As good a player as Tevez is, I do wonder if his skill set (deep lying schemer who is all about chance creation) can be replicated with players already at the club and thus, £10m and wage savings represents a good deal for Man City in this New World of FFP. But Tevez's sale wasn't just about FFP; it was about knowing when to sell a player when his contract was running down, it was about performance and potential performance. It may have been a sale with a tactical blueprint for next season in mind. Hell, it may have even been about severing the last link with Joorabachian.

Tevez's sale creates a problem - this time self made - for Begiristain: How to find a new #2 striker - albeit a deep lying one - who can be produce performances above, or at least equal to, the level which Tevez produced? Or, as alluded to earlier, Begiristain may feel Tevez's creativity could, potentially, be replaced 'in-house' and a forward with a very different playing style to Tevez could then be targeted.

Lets now look at some of Tevez's performance statistics form 2012/13.

Last year, due to Aguero's injury issues, Carlos Tevez was Manchester City's #1 striker in terms of minutes played and starts. We just sold a striker for a smallish fee whose true level is probably as a #2 striker who could occasionally fill in for the injured #1.

We know how Aguero's injury issues increased Tevez's work load this past season, but it's also worth remembering that Balotelli's sale will have impacted the other strikers minutes too. Tevez saw his workload increase to the point where he was clearly Man City's #1 striker. Conversely, Dzeko, despite injury to Aguero and the departure or Balotelli, played just over 50% of the available minutes. Edin may well be one of the biggest winners of the regime change, and now, with Tevez's departure, the path is cleared for the Bosnian to make a real fist of his City career.

I won't bore you with my reservations about substitutions and the inflationary effect they can have on strikers per 90 numbers instead i will merely say that Tevez, despite being 2012/13's #1 striker is only third in shots, shots on target and goals per 90.

Tevez's numbers in the chart above look replaceable and it is a possibility that Dzeko may profit form Tevez's departure and be given a bigger role in the team.

Whilst Tevez's shots performance is replaceable his passing numbers may well not be. Tevez was easily Man City's best passing forward with the highest key passes per 90 and he is also the player with the highest pass rate per 90. A portion of Tevez's excellent pass numbers may be due to how deep he tends to drop during games, I'm not convinced this is a bad trait but it raises some important questions about how how Tevez's positioning was affecting Silva and Nasri who may well have operated in this attacking midfield band of the pitch.

Now, this is a quirky stat. It's a relatively simple, if flawed, stat in American sports. Players with more giveaways are more likely to be willing to pass the ball in the first place.

Tevez and Aguero post strong Takeaway numbers, but when we look at Giveaways we can clearly see that Tevez is out on his own. For me Tevez's Giveaway number matches nicely with what we see with our eyes: he is a strong passer, not easily knocked off the ball and with a tendency not to give possession away cheaply.

As a striker these are very nice attributes to have in your skill set. These passing skills are far superior to Man City's last men standing, Aguero and Dzeko.

Is Tevez A Big Loss?

With any player sale in this new era it is usually very easy to make a judgement: If Man City have agreed to his sale, then the player is surplus to requirements.

Clear arguments can be made for why the player has been sold and these include the players age, his wage packet, the difficulty of a new contract. I have a hunch that if Tevez was a truly valued member of the team under this new regime then the listed reasons would have been readily overcome, a small extension may well have been signed, but it is not to be. Tevez, I believe, was surplus to requirements. He didn't fit.

Now, is Tevez's sale a big loss to Man City? Yes and no.

If we ignore all factors outside the players on field performance we can conclude that Tevez's shots and goal scoring performance (ranked 3rd on the team per 90) is replaceable. The amount of Minutes Tevez played will be more difficult to replace, and I imagine his heavy workload will need to be shared among any new signings and the existing forwards and attacking midfielders. What then of Tevez's best trait, his passing game?

We know Tevez drops deep, we know he likes to scheme and create but I get the feeling that Tevez's biggest strength is also his biggest weakness. The passing and the scheming that Tevez so excelled at can be replicated by David Silva and a centrally deployed Samir Nasri and at zero cost to the club. Infact, Tevez's absence may well allow the aforementioned players to blossom even further without a forward who preferred to drop into the attacking midfielders space.

Tevez's work rate will be missed, his ability to retain the ball and create will be missed, even if it is replaceable. Ultimately, Tevez is a striker and is paid like a top 10 striker in the world. Tevez doesn't shoot or score like a #1 striker and he is a player approaching the Autumn of a successful career. It was time to sell.

How To Replace Tevez

We have looked into why the player sold, his strengths and his weaknesses, now it is time to try and guess at how he will be replaced.

Scenario 1: In House. Silva can assume Tevez's tendency to create from the central attacking midfield area, but the biggest beneficiary of Tevez's sale may well be Samir Nasri. The Frenchman, who was deployed somewhat sparingly last term, may be asked to take on a bigger creative role in a central position and in doing could eat up around 40% of the minutes Tevez's sale has made available. If Nasri was moved more centrally and Man City decide to go with one striker who replaces Nasri's work on the left side?

Scenario 2: A New Striker. Some people believe Jovetic may be a good replacement for Tevez and a younger forward who can create, score and replicate Tevez's input as much as possible may well be signed. On the other hand, Man City may well decide to sign a 'pure' scorer safe in the knowledge that Tevez's creation can be replicated in house and that another scoring forward to add to Aguero and Dzeko is the best route to take.

Scenario 3: Another Attacking Midfielder. I think scenario 3 was the actual Plan A and the player may well have been Isco. The Isco boast has sailed but there exists plenty of other options for an attacking midfielder who can operate across the attacking midfield options.

All three scenarios will likely cost Man City a fair amount of money. It will likely be money that touches close or surpasses the fee Tevez fetched (£10m) plus any wage savings (£12m). Man City will likely spend all of the Tevez money on a younger player who will likely be at City for far more years than Tevez would have been.

It remains far from certain that any new addition - forward or attacking midfielder - for Tevez can outperform what the Argentinean would have contributed in the upcoming season.