As our new manager arrives, let's look back at one of the more overachieving and entertaining sides of its time: Pellegrini’s Villarreal was tactically astute, defensively disciplined and offensively adventurous. Using the “magic rectangle” 4-2-2-2 made famous by the Brazilian sides of the 1980s, the Yellow Submarine looked and played differently than any other side in Europe.

Also known as the magic rectangle, the 4-2-2-2 relies on strong organization and dynamic movement. The two defensive midfielders are perhaps the most important piece to the formation as they provide protection to the center-backs and positional coverage for the attacking fullbacks. The movement of players is both simple and complex, constantly shifting both to cover and to create passing triangles. 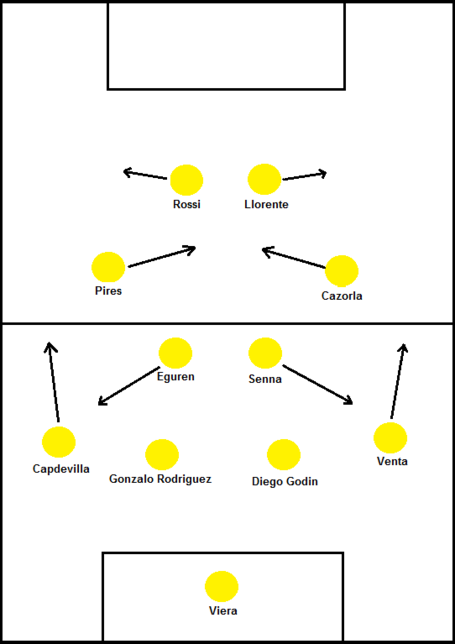 Without the ball, Pellegrini’s back four played a high line, emphasizing the offside trap. In front of them, the central defenders mimicked the horizontal movement of the ball, providing a constant shield for the center-backs. The attacking midfielders above them sat wider, so as to track the opposition's wingers. Unlike the double pivot, where the holding midfielders are asked to alternate their forward movements, the defensive midfielders in this system are ultra-defensive: without the ball, they maintain their line, always keeping a rectangular shape with their center-backs (this is where the "magic rectangle" moniker comes from) and in possession they are tasked with protecting their defensive wings.

The attacking width is provided by the fullbacks who are asked to run endlessly throughout the match and when they move forward, the corresponding defensive midfielder slides to that side so as to prevent openings on counter-attacks. The passing movement for Pellegrini was based on moving triangles: every action is dependent on the movement of the fullbacks -- when the fullback goes forward the attacking midfielder drifts inside and the striker moves to the wing; so when Venta moves high up the pitch, Cazorla moves inside so as to create a triangle between himself, Venta and Llorente. This movement can be seen below: 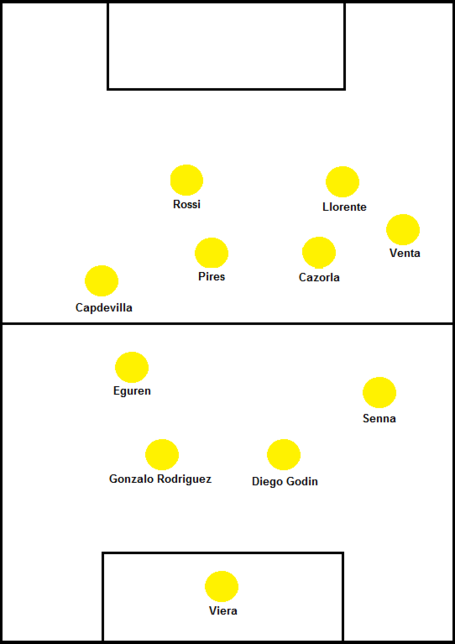 If however, the fullbacks choose not to push forward opting instead to sit deeper in defense, the central midfielders would drift out to the wings, themselves providing the width. In this case, the strikers dropped deeper into the midfield to create links between both levels of midfielders and the forwards, as seen below: 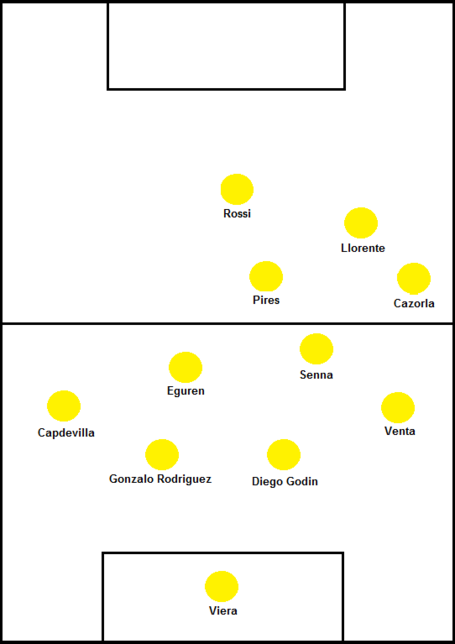 Again, the triangle possibilities are endless: Cazorla-Llorente-Pires, Cazorla-Senna-Pires, Cazorla-Senna-Venta, Pires-Llorente-Rossi, etc. Additionally, the movement of Cazorla and Llorente force the opposing defenders into difficult choices: if the left center-back tracks Llorente's deep run, he opens up far too much space for Rossi to run into, but if he chooses to sit back, he's allowed a natural overload in the midfield area. Likewise, if the left fullback chooses to track Cazorla's movement, he too, has opened up too much space behind for Llorente to exploit. The fullback has two choices, to sit or to advance -- and it's this decision that decides which movement is made and which space will be exploited.

Pellegrini preferred to play two types of strikers simultaneously: a physical target man (in this case, Llorente) and a quicker, more technical player (Rossi). While both are asked to pass and move, the final movement is ultimately different: the target man drifts further into the box while the technical player drops off to create tighter triangles with the attacking midfielders. This movement is especially easy to picture if we replace Llorente with Dzeko (or if we're into wishful thinking, Cavani) and Rossi with Aguero. While both score -- indeed, Rossi became a clinical finisher in this system -- the player's skill-set determines the final movement.

Pellegrini's 4-2-2-2 captivated the hearts and minds of neutrals, as the Spaniards continually overachieved both in Europe and in La Liga. The formation and the movement were so unique it was impossible not to become enraptured by the Chilean's "Yellow Submarine" -- but alas as Pellegrini moved to Real Madrid, he was forced to adopt the 4-2-3-1 and the magic rectangle disappeared from Europe.