A disastrous performance from the centre-back pairing leaves City feeling the Blues.

Share All sharing options for: City 2 - 3 Norwich: The Tactics

Before we look at the Norwich result, let’s first take on the small matter of reading the pitch diagrams and understanding the formations. There are three phases of the match that warrant a watch: defensive, transitional and offensive. When a team comes onto the pitch at the start of each match in a 4-4-2 (like City and Norwich on Sunday) or a 4-3-3 (like what Arsenal always plays in) that describes the formation the team will defend in. The offensive zone -- especially in City’s case -- is far too fluid and dynamic to be confined to a strict formation, but in the defensive zone, the more rigid and strict a team is, the better they’ll defend.

The transition phase is simple: how does a team move from the defensive phase to the offensive phase. In City’s case, the transitional phase consists mainly of Yaya carrying the ball forward (exactly like what we saw for Rodwell’s second goal on Sunday), which is one of the primary reasons we can look so disjointed as a team when Yaya is playing poorly. So what happens to a 4-4-2 in the offensive phase? Well for City, the width in attack is provided by the fullbacks (Zabaleta, Clichy, Maicon, Kolarov and Richards when deployed in such a role), allowing the "wingers" to drift inward -- this is especially true for Nasri and Silva who are at their best when moving from a wing to the center of the pitch.

As for the strikers, the second striker (the player who sits just behind the target man, usually Tévez or Agüero) typically drops into the midfield to link up with the deeper players while the target man (on Sunday this was Džeko) remains in line with the opponent’s centre-backs. The arrows on the pitch diagrams represent the shift in a player’s movement or position in the offensive zone from that of the defensive zone. With the logistics covered, it’s time to move on to the fun stuff.

Brian Kidd made five changes from the starting eleven that faced Reading on Tuesday, most notably opting to give Jack Rodwell a rare start in place of Gareth Barry. Edin Džeko and Carlos Tévez were also given starts in what could be their final competitive matches in City shirts. None of Kidd’s changes altered the starting formation as City began in a 4-4-2 with Džeko leading the line.

On the other side, Norwich played in their customary 4-4-2 with the only notable change being the underutilized Steven Whittaker in Sebastian Bassong’s centre-back position. Grant Holt sat at the top of Norwich’s attack, just above Wes Hoolahan. 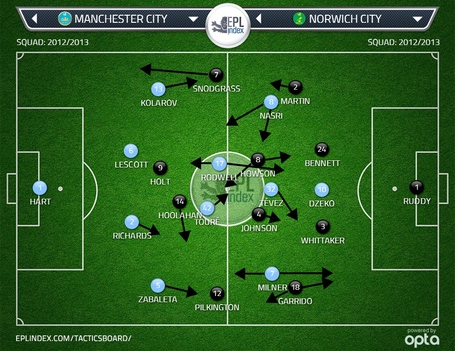 With Jack Rodwell being preferred to Gareth Barry, City’s midfield combination was significantly altered. At his best, Rodwell plays as a box-to-box midfielder – not as the defensive shield we almost always see Barry playing. The double pivot in its traditional form uses two central midfielders who alternate in their attacking positions, always leaving one of the two sitting deeper than the other, thus providing defensive support to the two centre-backs. When Barry and Yaya are the central pairing, Barry assumes the defensive role allowing Yaya to storm forward. Today however, Yaya was asked to play deeper (a role he excelled in at Barcelona) and Rodwell took up the attacking position.

The result? An impressive performance from the young midfielder that saw him score his first two goals in a City shirt while continually moving the ball forward through the middle. Rodwell provided the perfect link between the defense and the attack – a performance that must have all blues excited for next season.

Most likely because they were finally free of relegation and their newfound confidence that came from putting four past West Brom at the weekend, Norwich began the match on the front foot. They were sharper and more energetic than us, creating a couple of chances that could’ve seen them go in front very early (as it was they took the lead in the 26’). While City began the match as if it was little more than a mundane postseason friendly, Norwich saw it as an opportunity to play free-flowing, creative football, flooding the wings with continued runs that put early pressure on the home side. Only Tévez began the match with the appropriate energy – something that, for all his faults, we’ve grown quite accustomed to.

With Brian Kidd opting to rest Kompany and Nastasić, Jolean Lescott and Micah Richards began as the City centre-backs – and what a game to forget they had. While Yaya certainly deserves a large amount of blame on the first goal (he sure made a right mess of collecting and clearing the loose ball), it was Lescott who let Hoolahan skip past him and play in Pilkington while Richards was caught ball watching and couldn’t get back in time. On the second goal, Lescott was unable to cut out a smart pass by Snodgrass across the face of Hart’s goal that Grant Holt – left unmarked by Richards and Zabaleta – calmly finished off. The third goal was a bloody mess: Howson skipped past Nasri at the center circle, easily cut through Toure and Rodwell who were spaced too far apart, again skipped past a half-hearted challenge from Lescott, and shrugged off Richards as if he was a schoolboy. Truly awful defending from five different City players at four different points of contact. Fair to say we won’t be saying Richards and Lescott in central defense again…

Samir Nasri has to be one of the more frustrating players I’ve seen. That combination of talent, laziness and disinterest really is outstanding. When he’s on his game (which to be fair has been most matches since April), he’s one of the best players in the Premier League. I thought he was especially good on Sunday, wanting to be on the ball and dropping quite deep for large amounts of the match to influence the game from a deeper position than he is often wont to do. His passing chart (taken from Stats Zone) proves this better than any words can. More than half of his passes are in the middle third and of his five failed attempts, two were attempted balls into the box. That leaves just three on the day that went astray! This is the player we thought we were buying from Arsenal. 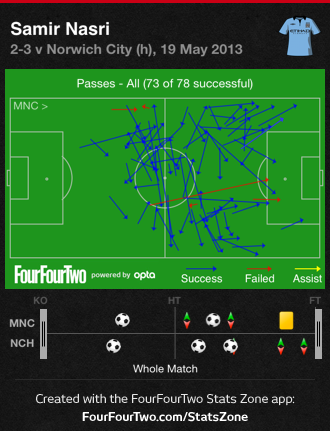 The Importance of Pilkington and Snodgrass

City’s 4-4-2 almost always sees either or both of Silva or Nasri on one of the wings, and due to their creative inclinations and lack of breakneck pace, they tend to quickly drift inside, shrinking the offensive area considerably. This is typically remedied through the offensive runs of our fullbacks, which often forces the opposing team’s wingers to drop deep and help their fullbacks – in this case that should have seen Snodgrass and Pilkington dropping back to support Martin and Garrido respectively. However, Norwich routinely played wide balls out to the wings, allowing Snodgrass and Pilkington to play deep inside the City half which forced Zabaleta and Kolarov to play deeper and safer than they have for most of the season. This made our attack too narrow, only rarely stretching the Norwich defense and pinning their wingers into uncomfortable situations.

The following heat maps (courtesy of ESPNFC.com) show exactly this problem: Kolarov did get forward more often than Zabaleta – although that came mostly in final thirty minutes when City were chasing the equalizer. 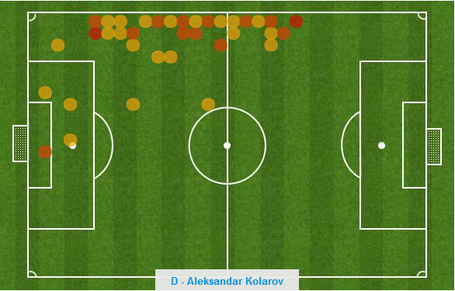 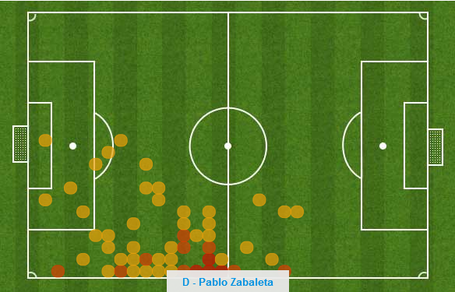 The Agüero for Tévez substitution was an obvious like for like change that didn’t alter our play in any considerable way. The Silva for Rodwell change however had a real impact in our formation, moving Nasri even further inside than he had already been drifting, and playing as a central midfielder with an increased involvement on proceedings. He forced City into a quicker tempo that I thought was an important factor in our dominant-without-scoring final 20 minutes.

It’s difficult to draw any meaningful conclusions in a match that really was devoid of meaning (although with United’s draw, a win would have decreased that annoying gap to single digits). Our lack of energy though was a little surprising given our front line was composed of two players who were probably playing their last match at the Etihad, while Lescott too is being rumored to leave in the summer. The obvious positives though are Rodwell’s man of the match performance and Nasri’s influential game – both of which bode well for our future.