This will be my final contribution from this FA Cup Semi Final weekend and it's an interesting one.

We shall look at the In Game TSR, the Shots Frequency, and Shots Location and Outcome.

This is an amazing graph. In my opinion the closing gap in TSR is a combination of of two factors. Firstly, Chelsea's tactical switch which brought Torres onto the field and Man City ceding territory and possession in order to protect the space around around their 18 yard box. 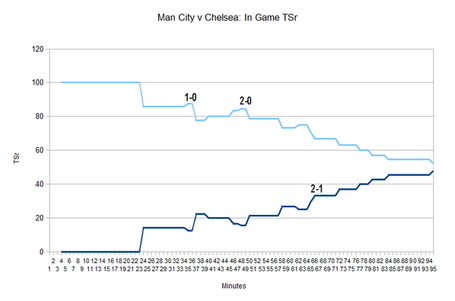 These shots totals are manually counted, not OPTA data.

The shots outcomes for both teams are pretty close; five a piece on target, five misses for Chelsea, four missed for Man City. Four blocked shots to City, 2 to Chelsea.

All the numbers we have on this FA Cup semi-final between Man City and Chelsea point to the same conclusion: Strong early dominance from Man City who after scoring the second goal sat off and allowed Chelsea to push and probe in search of a way back into the game. Chelsea scored an importantly timed first goal, and despite some scsres and fine save from the City 'keeper, Chelsea just couldn't get find a way through and score that second goal to tie the game