Share All sharing options for: City 4-0 Newcastle: The Shot Breakdown

We already have an excellent recap of Saturday's win up on the site here but one area I looked into during Saturday's game as it progressed was the split of shots between the two sides.

This was interesting because through the first twenty-five minutes of the game neither side had even attempted a shot in what was an uneventful opening. From that point on though, City took command of the game and completely dominated this statistic.

Unfortunately (well, in terms of looking at this area at least) Newcastle's attack was so ineffective that their shot totals were so low, however, although we don't have points to reference for both sides scoring (it makes it more interesting when this does happen, trust me) it is useful to see the moving TSR (Total Shot Ratio) throughout the ninety minutes to get a clear picture of when and how City began to dominate: 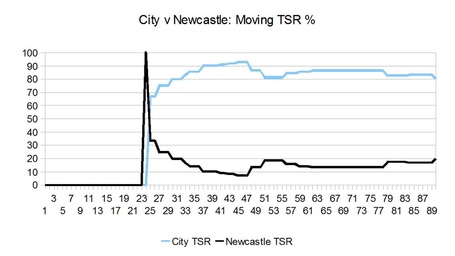 From the point when City registered their first shot (after Newcastle got the first one of the game) we can see that the twenty minutes up to half-time City got plenty (10 to be precise) away without reply. This of course was rewarded with the two goals that effectively killed the game.

After the break, we can see Newcastle - as TSR shows that sides trailing are inclined to do - came back into the game before City got their third and fourth of the game. At four goals down, Newcastle then got two late shots away but - again, unsurprisingly - if you recall this were hopeful long range efforts.

Of City's 20 shots on Saturday, they had eight on target, eight off target and four blocked. We can see in the following table the percentage breakdown of the respective three categories. This steep incline illustrates well quite how much City peppered the Newcastle goal during the second half of the first forty-five minutes. We can also see that there was no real differentiation between whether the shots were on or off target: 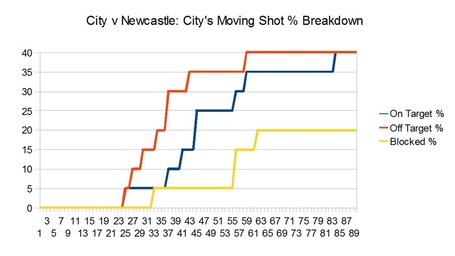 Shuddertothink has written plenty recently on Game States; effectively the influence that the state of a game has on certain in-match events. It is clear that at an 'even' and '+1' game state City were most productive in terms of shots on goal, an once City got the third and fourth (as expected) their shots on goal dried up with the game in the bag and little incentive to be as attack minded as when the game was still on the line.

The final graphic is an extension of this point and the following graphic breakdown of when shots were taken, broken down by total shots and shots on target. This again shows the dominance City had when the game was an 'even' and '+1' game state, registering 13 shots to one in reply. Four of Newcastle's five shots came when they were either 2-0 or 4-0 down. 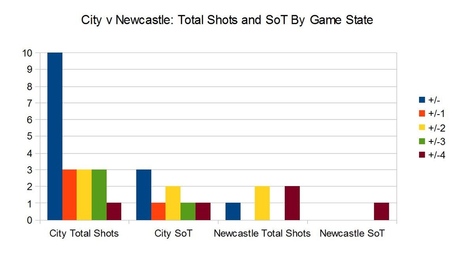 The above graphs illustrate that not only did City dominate the shot totals throughout the game, but this was even more so during periods of the game where the game was far from settled, with them conceding more shots once the game was over, a trend that is apparent from the games (not just City's) we have looked at this season.

This is an area we'll dip into even more over the remainder of the season, looking at both the games ahead as well as a look back at some of the more interesting games that have already occurred.