An update on Individual Point Percentage

Share All sharing options for: An update on Individual Point Percentage

Following on from this pair of articles (Shooting and Scoring efficiency and Shots and Shots on Target) from shuddertothink I thought it high time I updated the progress of an area I've looked at this season called Individual Point Percentage (IPP).

It is something I originally picked up from hockey and having tracked it week by week over the course of the season is an area that I think translates well into football. Whereas we have seen the strength of an attacking player demonstrated by the percentage of goals they have scored in relation to the team total this instead counts both goals and assists (total points) and only compares this to the goals a team scores whilst a player is on the pitch; therefore if they are injured, on the bench or have been substituted, any goals scored do not 'against' them.

The following table shows those players whose IPP total is in excess of 40%. This returns a total of 19 players and only those players who have accrued ten or more points (there is an argument this should be higher and I will revise further at the season end review) are included: 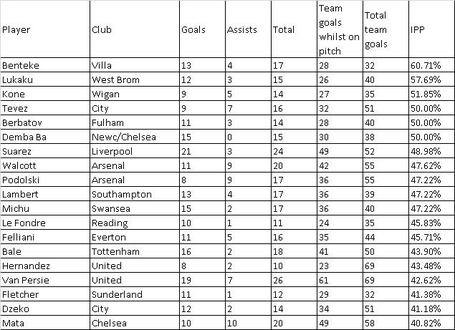 Some surprises perhaps and some perhaps not so and it is of course inevitable that strikers dominate the list (kudos then to Juan Mata whose scored of 40% from midfield is very impressive). Of interest too is to note that some players have been on the pitch for the vast majority of all team goals (Benteke, Michu, Lambert and in particular Suarez and Van Persie whose ability to post a high number is very impressive in sides that have scored plenty too) whereas some to a lesser extent (Tevez, Walcott, Lukaku and Berbatov). Does this indicate anything? Should these players feature more prominently or are teams justified by the 'success' they have without them on the pitch?

It is also very clear that behind the front two players there is a huge bunching of players from Kone in third to Michu in eleventh who are separated by less than 4% (and this is even tighter from Suarez in seventh down to Michu).

To expand the above chart further into a more visual presentation I have plotted IPP but also included this alongside Individual Goal Percentage (IGP) and total points accrued: 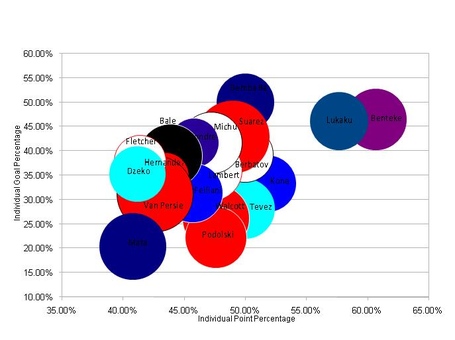 The further to the right a player is the higher his IPP score and then the higher up a player is the higher his IGP score. The bigger the size of the bubble, the higher the number of points they have. Therefore this chart shows the gap that Benteke and Lukaku have at present over the chasing pack, whilst we can see that within this group that although the IPP scores are extremely close there are telling differences to those players who are all-round contributors (Tevez or Walcott) and those who whose return has primarily been goals (Demba Ba or Suarez).

To take this a little further what I will look to do in a future post is to look the season moving average for some of the players listed to see who has progressed or regressed over the course of the season and, perhaps importantly, how these changes may have affected their clubs position in the table.