Using a very simple method we shall look at which Man City strikers have played the most minutes in the Premier League this season. We shall also discover who is at what position on the Man City depth chart and if those positions have changed over the course of the season.

First off, how many minutes have Man City's strikers played in the Premier League this season:

Tevez has been Man City's most used striker in the Premier League this season. Repetitive injuries to Aguero have seen the consistently fit Tevez log the most minutes, but it's a close run thing. Dzeko has missed the odd game through injury, but for the most part has played a low number of minutes due to certain prefences in team seection.

Balotelli, well, he hung around till game 23, but injuries and a lack of managerial trust led to a transfer back home to Milan. We wish him well, and a reported first option on any potential transfer away from Milan was judiciously included in the transfer.

Here we see each players minutes played in accumulated format.

Balotelli had flatlined before his transfer. Tevez was way ahead of every other striker in terms of minutes played, but Aguero's return from injury has eaten into Tevez's #1 minutes. Dzeko had a burst of early games at the seasons start when Aguero was injures, but since Aguero's return from that first knee injury Dzeko has seen his minutes decrease.

Now let's look at the above information in a different way:

The reason I used that calculation is, I think, pretty evident when looking at the graph above. We can see decline and progression in each players selection. A few words on each player.

Balotelli His % of minutes played was stuck between 30 and 40% for the duration of this season. As I have written on these pages before there seemed to be a disconnect between media and fan hype about his potential and skil,l and the trust the management team had in selecting him to play.

Either Balotelli's training and game performances weren't of a good enough standard, there were better players ahead of him for the striking berths, injury, or Mancini didn't fancy the player. Those are the 4 reasons I can think of why Balotelli was unequivocally Man City's 4th choice striker.

Dzeko The Bosnians minutes seemed to be very independent of Balotelli's selection, but we expect this. Balotelli was #4, Dzeko was #3.

What is interesting is how Aguero's early season injuries affect Dzeko's % of minutes played. If Aguero is out Dzeko jumps up a spot from #3 to #2. For games 22 and 23 Aguero was injured yet again, and again Dzeko jumped up a spot in the strikers depth chart. Aguero returned for game 24, but this time Dzeko held onto the #2 striking spot, and it was Tevez who dropped into the #3 slot and saw his % of minutes fall again.

Seems to me that Mancini will always prefer to have a small mobile and technical striker in the #1 striker spot.

Aguero When fit, he's Man City first choice striker, no doubt, no debate. Aguero has played over 80 minutes on 14 occasions, the other strikers?

The issue with Aguero is that knee injury. It has affected his season and at times it looks like it has affected his sharpness. Still, Aguero has seen his % of minutes played increase steadily over the season. When he is injured it has massive implications for Tevez.

Tevez Carlos' and Sergio's percentage of minutes played have an uncanny link:

Roughly speaking, If Aguero is injured then Tevez jumps up and gets the injured players minutes. If Aguero plays then Tevez sees his minutes and %MP decline. The graph above shows how intrinsically linked the two players are. If one player plays the others % suffers.

This may give credence to my hunch before on the topic of Mancini always wanting to play a clever, technical, quick player. Aguero (14 x 80+ mins) is the #1 choice, but Tevez is not a bad backup. One plays a lot, the other not so much. One gets injured, the other steps up.

Where this 'hunch' on Mancini's preference for Aguero and Tevez leaves Dzeko is anyone's guess. It doesn't look good for the Bosnian, who is without doubt a #3 striker for Man City. Dzeko is probably better than that, but not on a team who play the way Man City do. Maybe the rumoured move to Germany would suit Dzeko's style and strengths.

Any sale of Dzeko would recoup around £20m for the third choice striker. Put the Dzeko and Balotelli money together (#3 and #4 strikers) and we could buy something pretty and nice with it. £40m may go a long way.

Aguero and new signing as #1a and #1b with Tevez as the #3 and Guidetti as #4. Does that sound like an improvement over this seasons striker depth chart? 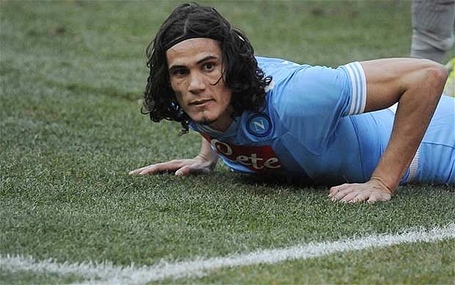