By Harkiano: A match which quietly simmered throughout the 1st half came to the boil in the 2nd period courtesy of the strong right hand of Joe Hart, who brilliantly thwarted International colleague Frank Lampard in his pursuit of his 200th goal for Chelsea, and in doing so inspired his City team mates to seize the victory that kept slim title aspirations alive. Arguably of more significance was the points difference established between City in 2nd and Chelsea in 3rd place, now standing at a healthy seven.

The first half by and large saw the Blues on top against a cautiously set up Chelsea side, without getting that breakthrough goal. Aguero and Nastasic should both have done better from very presentable opportunities, but Gary Cahill was performing diligently to limit the openings and the concern at the break was that this match would mirror many of City’s performances this season. Controlled, competent, but lacking that clinical edge. However 2nd half goals from Yaya Toure and Carlos Tevez towards the close of play ensured that there were positives aplenty for the hosts, the first of which was a welcome return to winning ways in the EPL, after the car-crash display in Southampton and the stuttering draws against Liverpool and Q.P.R. that severely hobbled the title push.

Pre-game Mancini had talked candidly about a number of his players operating at 50% of their performance levels, still suffering from the come down and/or congratulating themselves after the euphoric success of last season. The player most prominently criticized was Samir Nasri, who has failed to significantly impact on any matches this campaign, bar perhaps the season’s opener against Southampton and the 1st half of the game away to Newcastle. Also fingered for criticism was Joe Hart after his howler down on the South Coast. England’s No. 1 was restored here and erred in conceding the penalty only to dramatically atone for this. The clean sheet ensured that he is on course to retain the ‘golden gloves’ award for the 3rd consecutive campaign. 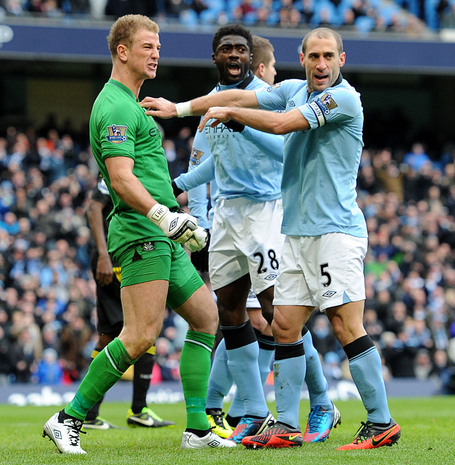 The F.A. Cup canter against Leeds had a restorative effect for City that continued here. Of major prominence was Yaya Toure, scorer of a fine goal in last weeks fixture and on the basis of his adroit forward play in that game given the role of support striker with Aguero ploughing a long furrow up front. Yaya was impressive throughout, operating 20 yards further upfield than he has for the majority of the season, and able to strongly influence proceedings before scoring an excellent goal on the hour mark, sweeping past a flilmsy challenge from Obi Mikel and sweetly placing the ball inside Peter Cech’s left hand post, via a slight deflection off the heel of Gary Cahill.

The most striking performer prior to his substitution though was Jack Rodwell, who demonstrated an element to his game some way removed from his previously acknowledged strength in a defensive, destructive midfield role. Given licence to support the attack, Rodwell appeared in the Chelsea penalty area on numerous occasions in the 1st half, offering an aerial threat and taking up good goalscoring positions. He was withdrawn shortly into the 2nd period as Tevez was introduced to pep the City forward line but it was a hugely satisfying performance from the former-Evertonian which suggests that his future may lie in an advanced midfield position. It will be interesting to see how much he features over the remainder of the season and where, provided – of course – that he can stay fit. 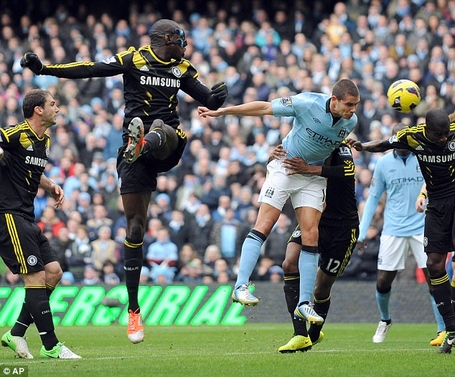 With Vincent Kompany again missing with a groin injury, Kolo Toure partnered Nastasic at the heart of the City defence. By and large the duo were impressive in stifling the isolated threat of Demba Ba – the penalty incident aside. Kolo was also on hand to snuffle out the danger from a rare Chelsea break, dispossessing Ramires in the City box moments before his brothers’ key intervention at the other end. That said the return of the captain will still be greatly received however, now pencilled in for next Monday’s encounter against Aston Villa.

As Chelsea advanced in the 2nd half, shading the possession stats (53% to 47%) – no mean feat at the Etihad – there was greater space for City’s forward line to operate in. Aguero again spurned a good opportunity to get his name on the scoresheet, but City were looking more and more positive with Milner, Toure and Silva to the fore. Confirmation of the outcome arrived with 5 minutes remaining as Carlos Tevez beautifully arrowed a strike from the edge of the area past the despairing dive of Peter Cech. It was the perfect way to round off a satisfying afternoons work.

Man of the Match: Yaya Toure