The usual numbers, talking points and goal of the week

1) Title over. Turn your gaze to the exciting race. That being the race for the Champions League Qualification places. United won away at QPR, which means the title is over and Man City triumphed over Chelsea which means 2nd is all but wrapped up. What we are left with are 4 teams who can make fourth place, 3 of them have a realistic chance, the other, Everton, are a bit of a long shot and are included here to make up the numbers.

The race is strictly a London affair. 3 into 2 will not go.

Everton, as stated, are the outsiders, but the Toffee's are only 6 points back. Oh, for those last 10 minutes back against Norwich.

What can the strength of the remaining opponents tell us about about each teams' chance of qualifying for the top 4. To do this we shall look at the each teams fixture list and the quality of opposition that they have to face.

Any form of estimating the strength of a fixture list will run into problems. The issues here are simple: firstly, is the league table the most accurate measure of a teams strength and, secondly is taking the league positions of each teams opponents now and not at the time of each specific fixture is unfair. Form fluctuates, teams fall and rise.

But using this crude method, flawed as it is, shows us that Chelsea's fixture list is the most difficult with the average league position of their opponents being 9.8. Tottenham have the easiest fixture list, 10.8 which is just slightly easier than Arsenal's. This basic method was a basic guide, the real acid test comes when these teams play against each other, starting with Arsenal's visit to White Hart Lane on Sunday.

2) Berbatov! Many a fine goal was scored this week, including Berbatov's lovely volley to win the game for Fulham:

The control and the required technique are what make this goal special. He is a fine, fine player and one we should cherish for not many players can overcome a less than great work ethic and become such a great player in the Premier League. One reason for that lack of work ethic? 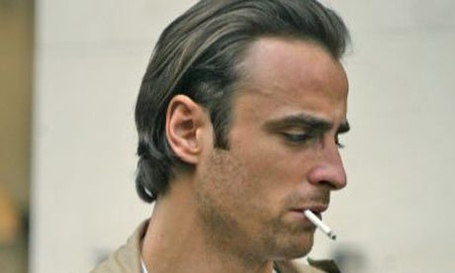 3) Gareth Bale It was some individual performance form the Welshman during Tottenham's excellent win over West Ham which culminated in that thunderbolt from distance with time ticking down. Bale's recent excellent form will only heighten transfer speculation and further drive a valuation, already high, even further through the roof.

Daniel Levy is a tough negotiator, who may or may not want to sell, and would guarantee that the Premier League's most saleable asset fetches top price. The list of clubs who can afford the player seems to be shrinking by the week, and a price north of £40m doesn't seem far fetched.

I have stated for the last 6 weeks on these pages and on twitter that Man City's primary transfer target should be the Welshman. Bale would offer pace and a unique directness to a Man City XI that, at times, can appear leaden and one paced. Forget the wonder goals which may not always be so frequent in Bale's career as they are now, and you are still left with a supreme player who may be one of the very few in the entire world that could galvanize and transform Man City as an attacking threat.

Bundle the money earned from Balotelli's sale and any other sales (Dzeko?) and offer the £40m+ that may be required in order to have Bale transferred to another Premier League club. An eye wartering sum no doubt, but if Man City are able to get £35-40m from the sales of their 3rd and 4th choice strikers it surely cannot be that outrageous to suggest throwing in another £10m to buy a player who appears to be far superior to the aforementioned strikers, and also seems to be having the kind of breakout season that Ronaldo had at Man United.

Any sum of money that large has a multitude of risks linked to it. Injury is one such risk. Bale is a healthy boy who is in impeccable shape, tee-total and reportedly enjoys triathalons in the off-season. Serious knee or leg break injuries are always a risk, but I'm not sure a club has ever vetoed a potential target due to concerns over leg breaks of first time cruciate snaps.

If the boy can be signed, I say sign him. To me, he looks like he coud still be on the upcurve of his growth in performance.

4) Some teams are better than others when leading. I tweeted (link) some of this information out last night whilst watching the lead change hands in the Spurs v West Ham game. Swansea for example are a team who, when leading, rarely give away any points. Southampton, conversely, are the complete opposite and are giving up a crazy amount of points when they have been leading at any point in the game:

Man United are the dominant team, both now and historically, when leading in a fixture and thus it surprises nobody that they 'concede' the fewest points per game when leading. QPR give up the most points per fixture.

Frankly, there is no real correlation between points 'conceded' from a winning position and actual points gained. I wouldn't put too much stock into the information above. It may just be noise or chance, who knows. Could it be that teams are not only out-shot at +1, but that some are far weaker defensively when leading at a +1 game state?

5) Man United and Why Game States Are Important. Manchester United currently lead the PL by a ridiculous margin of 12 points. This United team have conceded a lot of goals this term, had many comeback wins and, for those who look at these types of things, aren't a great shots team either.

As for those shots ratio, I have Man United's TSR at a shade over 53% and a SoTR of 56.88% but these 'total' numbers include data for when Man United may 2 or 3 goals ahead, and it may 'take it foot off the gas' and allow the opposition to enjoy more territory and potentially a bigger share of the shots. A quality team like Man United will fight like hell when they are just the one goal down, and will thus have a bigger share of the shots count (actually 63.6%) than they would have when leading by 2 goals.

SO let's tie up some of that information on Man United's shots for and against performance at certain game states. To do this I am going to use Man United's % of time spent winning, drawing or losing:

I have taken all the time spent winning, drawing or losing and turned it into a percentage, and done the same for any shots, for or against, at certain game states. I have then listed all that information as a percentage share. Above is this information as a visual, and below in cell format.

Is this reduced volume of shots when winning a function of United 'sitting back' and allowing the opposition time on the ball in order for United to protect their shape and thus the lead? Yes, it's called score effects and will be my main focus over the summer.

6) Liverpool's Improvement Simple, really. Liverpool are trending well, it's an encouraging sign for a team under a first year manager. Maybe Rodgers' message is getting through. Probably need to improve to around a 1.79 ppg pace to qualify for 4th.

A bridge too far this season I think. Liverpool are on course for 55 points. 13 short of the ten year average required for 4th place.

7) Time to drop, QPR. It seems as likely now as it has for most of the season: QPR will be relegated. The R's are now 7 points adrift with just 11 games to play, and, yes, teams have staged miraculous comebacks to survive the threat of relegation, but QPR aren't exhibiting any flickers of form that may indicate a revival.

Relegaqtion threatened teams really need to make hay at home, and QPR's home form is just one problem of many. QPR have scored just 8 goals at home all season, and crucially, have failed to score in the last 5 home games. Sounds like Man City's home form under Stuart Pearce!

One optimistic sign for QPR is their fixture list. Games against Southampton, Reading, Sunderland, Villa, Wigan and Stoke offer a chance, and it's only a slight chance, to maintain their perilous PL status. Alternatively, away trips to everton, liverpool and a home game vs Arsenal are the dark cloud fixtures.

8) This time last year. I wrote one of my first ever blogs here on Bitter and Blue. In that article I tried to predict the title race with 12 games left to play (link). It turned out pretty well! I had Man City down to gain 89 points (including getting their win/draw/loss record spot on) and I had Man United to gain 88 points. Pretty darn close won't you say?

I'll have another stab at predicting the title race at some point this week so as to prove that last year's prediction was solely blind luck! Don't expect any positive predictions.

9) Community Question: What's Happened To Injuries? Anyone have any ideas on on why injuries may be declining? Did the fixture list ease off post-xmas? Random variation?

10) Goal of The Week. Cisse's volley was brilliant, my god it was. unluckily for the Newcastle striker it happened on the same day as a surface-to-air missile was launched at Loftus Road: