A fair result or a disappointing display? Probably both, although a point away from home to a very good Southampton side will likely prove meaningful as the season wears on. In a match that saw City play maybe fifteen good minutes of football and hang on for the rest, I find it hard to bemoan the result.

Share All sharing options for: Southampton 1 – 1 City: The Tactics 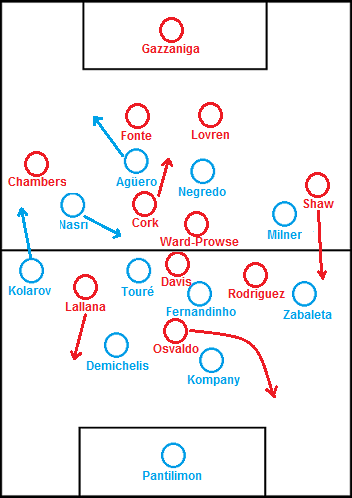 Southampton’s high press and five-man midfield proved quite the adversary to the high-flying, goal scoring visitors, who (whether purposely or not) ceded possession for long spells of the match; indeed, not since Bayern travelled to the Etihad at the start of October has City struggled this much in the midfield. Fernandinho and Yaya Toure often looked helpless against Southampton’s midfield triangle of Stephen Davis, Ward-Prowse and Jack Cork (the latter two in for the injured Morgan Schneiderlin and Victor Wanyama). With or without the ball, Southampton controlled the middle of the park, as City were increasingly forced to forgo short midfield passes for longer, aerial balls over the top (something that not surprisingly, proved ineffective).

Pellegrini opted for James Milner on the right, thereby leaving Jesus Navas on the bench; a rather reactionary approach, most likely designed to counteract Luke Shaw’s ability and influence going forward. You’d be forgiven for thinking that Milner’s defensive responsibility as well as his more natural understanding of Zabaleta’s movement (Zabaleta and Navas still have yet to discover the proper chemistry required for two such intertwining positions) might prove decisive – instead, Luke Shaw and Jay Rodriguez (as well as Pablo Osvaldo who spent most of the evening running into City’s right channel before shooting from Pantilimon’s right) found space and time on City’s right flank.

With Dejan Lovren and Jose Fonte positioned quite high up the pitch, Southampton shrunk the midfield, allowing the high press to be ultra-effective as Fernandinho and Yaya Toure were routinely forced into quick decisions and one touch passing: something neither player is especially good at. As space and time became more difficult to find, City began to panic, trying to place too fast and too long – the former, a trait that can prove effective (the two team goals against West Brom) or disastrous (much of this match). In an attempt to forego the midfield, City were turned towards the long ball, which inherently reduced the effect that Nasri and Aguero (and later, Navas) would have.

While City were forced to adjust, Southampton thrived in their preferred style; one that sees possession, passing and pressing valued above all the rest. While Pantilimon continually pumped the ball forward to City’s short players and Negredo, Gazzaniga continued to play out from the back, a trait that only further allows Southampton to find and play inside their comfort zone. 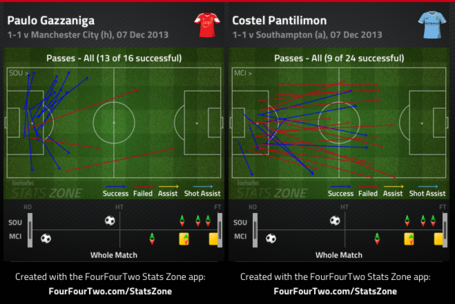 The difference is startling, not just by completion percentage, but in the positional spaces City afforded Southampton. When a team plays in a two striker system they have one very distinct advantage, an attacker to each opposing center-half, and one very obvious disadvantage, a numerical deficiency in midfield. Without the ball, it means the center-backs are much more likely to be pulled out of position as the strikers come and go, while with the ball, they often find themselves pressed evenly across the pitch. Against City though, Aguero and Negredo dropped too deep, gifting Lovren and Fonte far too much to push the ball into positions of strength.

In an attempt to counteract Southampton’s midfield advantage, Pellegrini opted to switch his system, removing Negredo and shifting from a 4-4-2 to a 4-2-3-1. With Negredo now removed, Aguero played alone up front, with Yaya Toure moving into the #10 role beneath him, protected by Fernandinho and Javi Garcia. At the same time, Jesus Navas was introduced and while he slotted into Milner’s position on the right, his role was meant to be different. As mentioned above, Milner and Zabaleta play to each other’s strengths: Milner can’t – and doesn’t try – to beat his man for pace, instead often moving inside of City’s formation, allowing Zabaleta to move forward on the right wing. Navas and Zabaleta however, clash stylistically, as Navas routinely relies on his pace to beat his man, forcing Zabaleta to either attack on the underlap (a riskier route than the overlap) or sit deeper than he would otherwise.

City desperately needed a player to run at Southampton in an effort to expose their high line, something that may have forced Southampton to react and sit a bit deeper, thus affording the City midfielders more space and time on the ball – Navas’ introduction, sadly, did no such thing. Instead, City continued to launch aerial balls around the pitch, negating Navas’ primary strength, instead exposing his inefficiency when playing with his back to the defender.

And so, without Navas making a difference and Javi Garcia again looking too slow in his movement and reading of the game, Pellegrini’s changes ultimately changed very little. Interestingly, City’s next match (away to Bayern Munich in a game that will decide the Group) will feature a side that press even more effectively and keep the ball even more impressively, making this game against Southampton quite the learning lesson. Will Pellegrini again opt for the 4-2-3-1 he played the first time out against Bayern or will he instead stick to his 4-4-2 and take his chances against Bayern’s 5 man midfield? With reports saying Silva will return on Tuesday, chances are Pellegrini plays a 4-4-2 with Aguero and Negredo leading the line with Silva replacing Milner in the starting lineup; that would allow City a better chance of keeping possession and playing a shorter passing game, but might still prove ineffective against Pep’s midfield machine.

As for the remaining elephant in the room, I see very little reason for Pantilimon to keep his place in front of Hart, especially in a match that, while appearing all but a formality, could ultimately prove Hart’s catalyst to regain his form.